“If you add how deep I’ve been in the ocean to how high I’ve flown in space, I’m the most vertical girl in the world!”

Kathy Sullivan has an astonishing list of achievements under her belt: NASA astronaut, first American woman to walk in space, NOAA Administrator, president of COSI Columbus, and author of Handprints on Hubble. On June 7th she added one more—becoming the first woman (and the eighth person) to ever reach Challenger Deep. The journey seven miles below sea level also makes her the first person to ever visit both space and the deepest part of the ocean.

Kathy first heard about the Marianas Trench as a freshman at the University of California Santa Cruz where she enrolled as a language and linguistics major. As part of the school requirements, she ended up taking two natural science courses—one in marine biology and one in oceanography. “Both were taught by dynamic, young professors who brought their passion for the subject into the classroom,” Kathy recalls. Those classes changed her perspective of the ocean and launched her on a new career trajectory. “I was bitten by the bug right away.”

During a 1996 expedition to the axial volcanic zone of the East Pacific Rise, Kathy made it down about 8,700 feet, but she always hoped for a chance at the ocean’s holy grail. Then, last year, she got the call from Victor Vescovo. An investor and undersea explorer, Victor has been funding the technology to probe the depths of our blue planet. He’s already been to the deepest point of all five oceans, including the trench, and he was gearing up for his 2020 missions—organized by his company Caladan Oceanic and EYOS Expeditions.

“An explicit component of Victor’s strategy was to raise awareness of the ocean by bringing notable people to interesting parts of it. As part of that he decided it was time for a woman to reach Challenger Deep, and he decided that it should be me,” Kathy recalls. “Needless to say, I quickly said yes.”

Fittingly, the morning before World Oceans Day, Kathy accompanied Victor down more than 35,800 feet inside the two-person vehicle known as Limiting Factor. The first privately-owned full-ocean-depth submersible, it can withstand 2,425 tons of pressure on its titanium hull—a critical feature considering that human bones literally dissolve if exposed at that depth!

Victor refers to the individuals he takes down with him as Mission Specialists—the same title Kathy held at NASA. But unlike the complex training required for her three space shuttle missions, the prep was modest. “I did some basic training on emergency equipment and onboard procedures as you’d expect, but it was more academic—diving back into some of the scientific literature about the trench—than any physical preparation,” she says.

The journey itself was also a lot easier as she describes: “Going into space is intense, explosive, and noisy. You’re basically riding a bomb when you launch off the planet. But heading into the deep sea is like a serene, magical elevator ride.”

It took close to four hours to reach the bottom and along the way the pair watched life forms scoot by the windows while enjoying tuna salad sandwiches and chips. “We had lunch at 32,000 feet because of course everyone does that,” Kathy quipped. The temperature began to drop inside the cabin as they plunged further, so they donned hats, gloves, and other cold-weather gear.

One of the key goals for this series of dives was to get more precise measurements of the sea floor. To achieve this, they used a combination of instruments on the submersible and on three robotic landers dispatched prior to their decent. So once on the bottom they spent about an hour and a half capturing 4K high-resolution images and collecting other data. 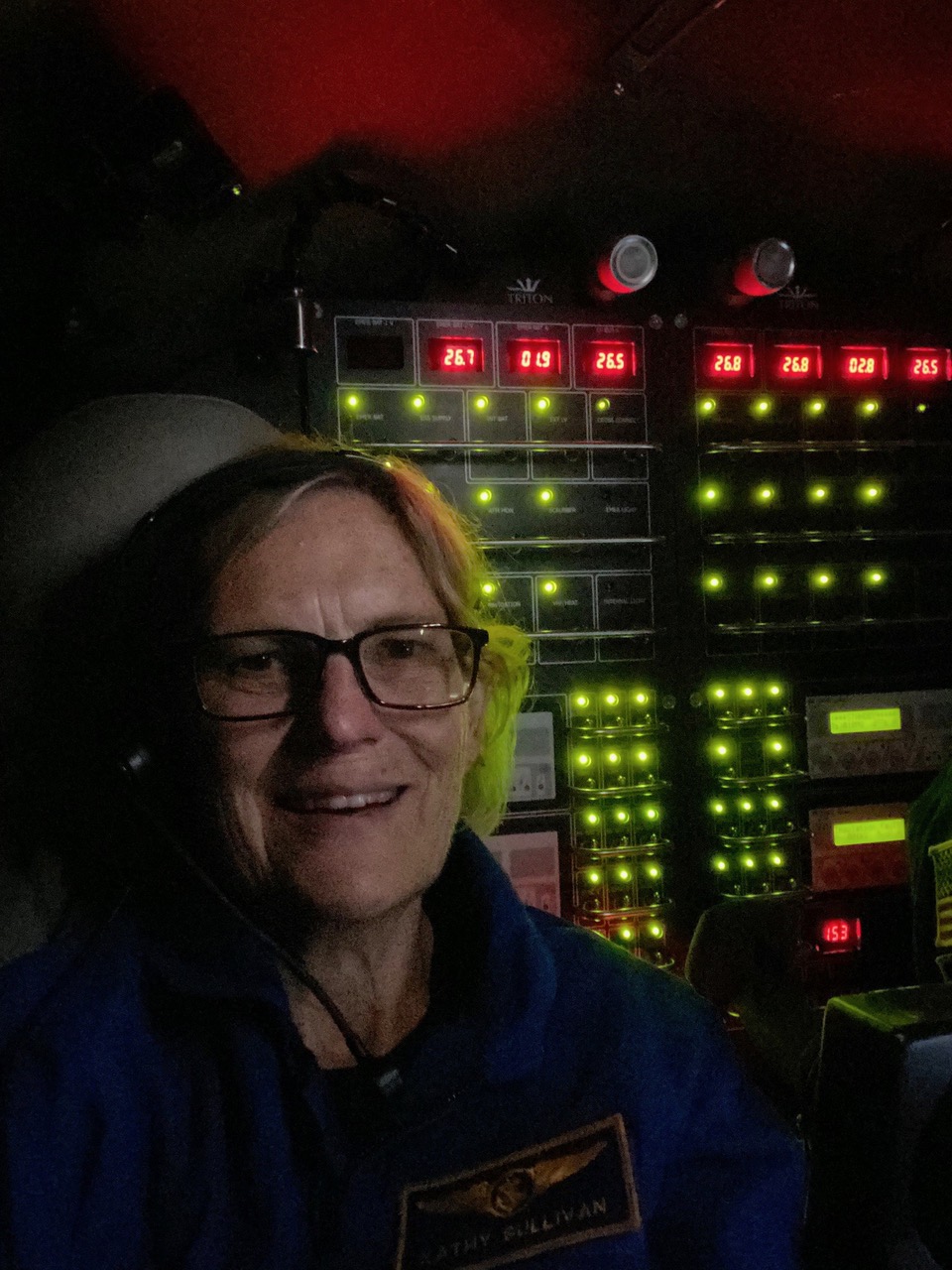 As a geologist, Kathy was also glued to the view out her porthole. “We were over the sediment-covered portion of the trench and it looked like a fascinating moonscape to me—but it was right here on my home planet. There were clearly some critters floating along it and I saw a number of holothurians, or sea cucumbers.”

Just like space, there is still an infinite number of things to be learned from these really deep parts of the ocean. Kathy is excited by the doors that Limiting Factor has opened up for science and research. “For a bit of perspective, 52 years elapsed between the very first dive down to Challenger Deep and the second one,” she says. “Don Walsh and Jacques Piccard first explored in 1960. Director James Cameron went down in 2012. And now I was on an expedition that went down three times in just seven days. That’s a radical step forward.”

When Kathy and Victor resurfaced they made a call to the International Space Station, sweetening the once-in-a-lifetime moment.

“The vantage point that space offers us is so powerful for understanding the planet as a whole, and it’s equally true of the ocean. Every new insight we learn from the sea is further testament to the fact that every part of our planet is interconnected with every other one.”

Explorer Kathy Sullivan will be traveling as a Global Perspectives Guest Speaker aboard two polar expeditions. Join her on a Journey to Antarctica in December 2020. Her Arctic schedule is still pending. Check back here for the latest details and dates.

Antarctica in Action: From Energetic Wildlife ...