Going to Jan Mayen: A Firsthand Account of a Remote Arctic Island

Our creative director, Christine Bastoni, recently went on an Arctic expedition that made an unplanned stop at remote Jan Mayen. This is her firsthand account of the reasons why travelers will want to plan to go there.

Any interest I had in Jan Mayen was mostly deeply shallow: I wanted the bragging rights; I was in it for the stamp.

I knew it was the northernmost island in the storied Atlantic Ridge, the same geological thread studded with other near-mythic destinations: Tristan da Cunha, Nightingale, Ascension and Inaccessible islands. I wanted to go there because you basically can’t. To say, “I’ve been.”

So, when on a recent Arctic expedition, Expedition Leader Peter Wilson announced at recap that tomorrow we’d be going ashore at Jan Mayen, not scheduled on our specific itinerary, a few of us shouted out, fist-pumped. Around us, speculative silence. “That’s the reaction I was looking for,” Peter said, “but I’m not surprised that most of you don’t know what elicited it.”

He briefly described Jan Mayen: A volcanic island in the Arctic Ocean, roughly 500 miles from anywhere you’ve heard of. The world’s northernmost active volcano. A Norwegian territory, a meteorological station under military jurisdiction, inhabited by only 18 people, except for the summer maintenance period when as many as 35 people are on island. We’d need the right conditions to land, so listen tomorrow for updates.

He then invited the voyage’s Global Perspectives Guest Speaker, Andrew Evans to make a short Jan Mayen presentation. More on that in a minute.

If you Google Jan Mayen—as I did in anticipation of my Arctic expedition—you’ll find images of  breathtaking geology. Two images really wowed me: this monumental curl of rock that looks smelted and poured, a bronze casting.  And another photo of a similar feature, revealing the whorl and tubular cavity. Having taken one of our expeditions to the Marquesas last year, I am now a rabid fan of volcanic island beauty.

The stratovolcano that created this place is named Beerenberg, the island’s highest mountain at nearly 8,000 feet. When not wreathed in fog, it’s resplendently pleated with 20 glaciers, streaming down—a gargantuan melting sundae.

The island has a vivid history, much of which occurred before 1635, during the Dutch Golden Age of exploration, and involved the usual rivalries and barbarism of whaling.

And then there is the particularly rich chapter Andrew Evans illuminated for us in his recap presentation.

He told us a story about a time when Jan Mayen was itself a metaphor.

In the spring of 1940 during WWII, continental Norway was invaded and occupied by the Nazis. The four-man Norwegian team on Jan Mayen stayed at their posts and in an act of patriotic defiance began sending their weather reports to the United Kingdom instead of Norway, aiding the Allies. More importantly, for occupied Norway Jan Mayen became a potent symbol of their freedom and sovereignty—out there, admirable, reclaimable. “Dark stands an island of the sea, Lonely and cold and bare. This is Norway’s land, This is all we have…” is the first stanza of the 1942 poem by Norwegian poet Nordhal Grieg, that Andrew, who translated it for us, read as a finale. 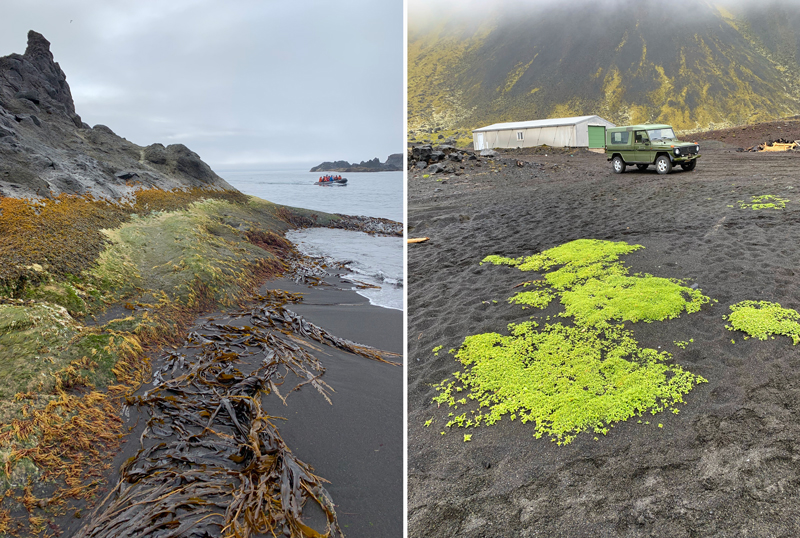 Our Zodiacs bucking in the surf. Landing on the black beach.  Walking up the slight slope, volcanic sand audibly grinding as you tread. Behind us, an arc of rock cupping the far end of the beach, and variegated tiers of lush seaweed. Ahead, the hyper-utilitarian galvanized structures of the base all pinioned by cables to survive the assailing winter winds. Hut-like clumps of lava rock thickly furred with lichen, some containing black voids—holes where I imagined the 15,000 arctic foxes, all hunted to extinction, once skipped in and out.

A landscape of peerless geologic grace, at once empty, and full. I wished I could’ve stayed the whole summer, running my curiosity over it like a hand on a horse.

When we returned to the ship, the Hotel team gave us back our passports—stamped.

These are the things that happen on a Lindblad expedition. How the unexpected ends up figuring prominently in your personal everlasting.  And how the alchemy performed by the expedition team manages to transmute even your basest travel motives into gold—the rich, meaningful experiences that stamp you.