“Those who would reject out of hand the idea that whales are intelligent enough to consciously interact with us haven’t spent enough time around whales.”  –Toni Frohoff, Whale Behaviorist

From the biblical tale of Jonah to Melville’s legendary Moby Dick, whales have long captured the human imagination. The planet’s largest creatures, they spend the better part of their lives deeply submersed in their private watery world. Those fleeting glimpses we get when they breach, fluke, or bubble-net only deepens our curiosity, as we’re left at the surface wondering about their daily lives. But in Baja California, it’s a different story. There, in the warm protected lagoons gray whales are equally curious about us as we are of them.

Gray whales are pretty fascinating members of their species. They have the longest migration of any mammal in the world, traveling up to 12,000 miles round-trip each year from their Arctic winter grounds to their breeding grounds in Baja. They are considered the most primitive whale (meaning they’re most like the common ancestor of all whales) and they’re the only whale to traverse the comparatively shallow waters of the continental shelves. But when you add in the unique behavior that earned them the honor of ‘friendliest whales in the world!’ their allure skyrockets.

Each winter in calving lagoons like San Ignacio and Magdalena Bay, you can find genuinely curious and playful mother whales approaching small boats, even lifting up their calves for a welcome pat on the head. It seems especially puzzling since gray whale mothers are known to be fierce protectors of their young, yet this behavior only seems to happen in these birthing lagoons. “At precisely the time when you’d expect them to be the most defensive, they’re incredibly social,” said whale behaviorist Toni Frohoff in a New York Times Magazine article, “Watching Whales Watching Us.” “They’ll come right up to boats, let people touch their faces, give them massages, rub their mouths and tongues.”

Even more surprising? The fact that California gray whales seem so enamored with humans, considering our dark history with them. Twice in the last 150 years, these whales came dangerously close to extinction, harpooned by the thousands. In 1855 whaler Charles Scammon was the first to hunt grays in both Laguna Ojo de Liebre and San Ignacio. The whales were easy targets inside these quiet bays and when word got out the exploitation exploded. In just a few seasons there weren’t enough grays left to support the whaling industry.

Over the next three decades the whales began to rebound. Then, in 1914, Norwegian factory ships returned to Magdalena Bay, followed by Japan, the Soviet Union and the United States, and the devastation began again. Protections were finally put in place in 1946 and these gentle giants have made a remarkable recovery—their numbers have climbed to about 26,000 which is thought to be close to pre-whaling accounts. It’s the only baleen whale to have ever successfully recovered from commercial whaling. 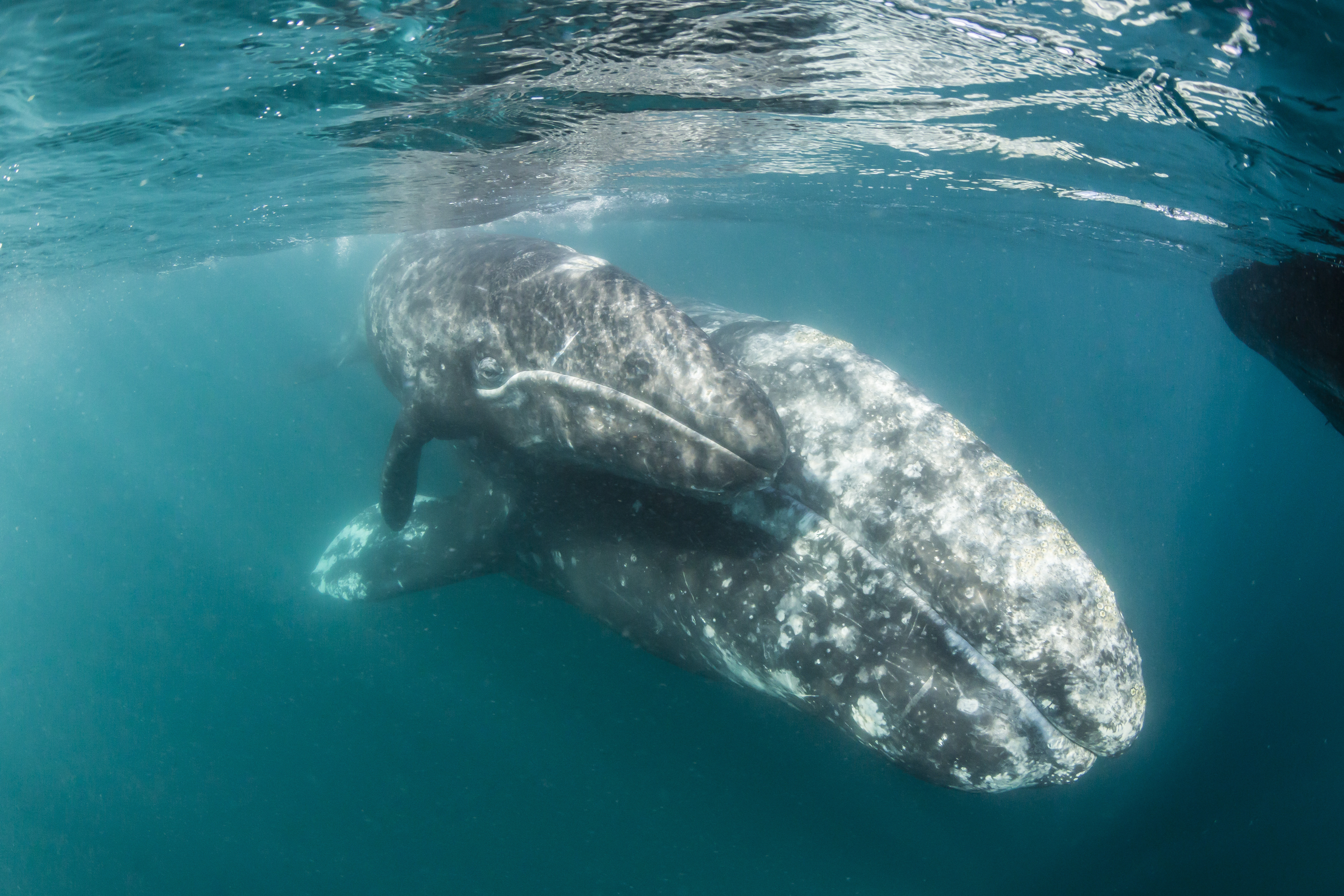 They may be friendly today, but grays once earned a very different nickname—the ‘devilfish’—since mother whales would aggressively defend their calves by thrashing against the whalers’ boats. This hostile reputation lingered for years and wary fishermen continued to steer clear until the 1970s when a curious gray whale approached a boat. The fishermen moved away but the whale continued to come closer, sticking its head out of the water. Finally, one brave soul decided to cross a tremendous divide—he reached out a gentle hand and touched the whale.

This peace treaty has blossomed into a seemingly unique whale culture. Many mothers are passing down this behavior by encouraging their young to approach small boats and helping them get closer by lifting them towards the surface.  An incredible behavior that has left scientists and civilians alike completely baffled. According to that same New York Times Magazine article, “some marine biologists have dismissed the phenomenon as little more than a reflexive behavior, suggesting that the whales are merely attracted to the sound of the boats’ motors or that they are looking to scratch their lice-ridden and barnacled backs against the boats’.”

But scientific studies as well as anecdotal evidence points to something way more profound going on. In 2006, researchers discovered brain cells previously found only in humans and other primates in several whales including humpbacks, orcas, and sperm. These spindle neurons are thought to be associated with complex social and emotional skills like recognizing, remembering, communicating, and reasoning. And the part of their brain which processes emotions appears to be more complex than our own. While there is still a lot more to be studied, we’ve all seen those viral stories of whales and dolphins protecting seals, sunfish, and even divers from an oncoming shark attack, or of the beluga who retrieved a woman’s dropped iPhone. It really appears that these marine mammals are deep thinkers and feelers! 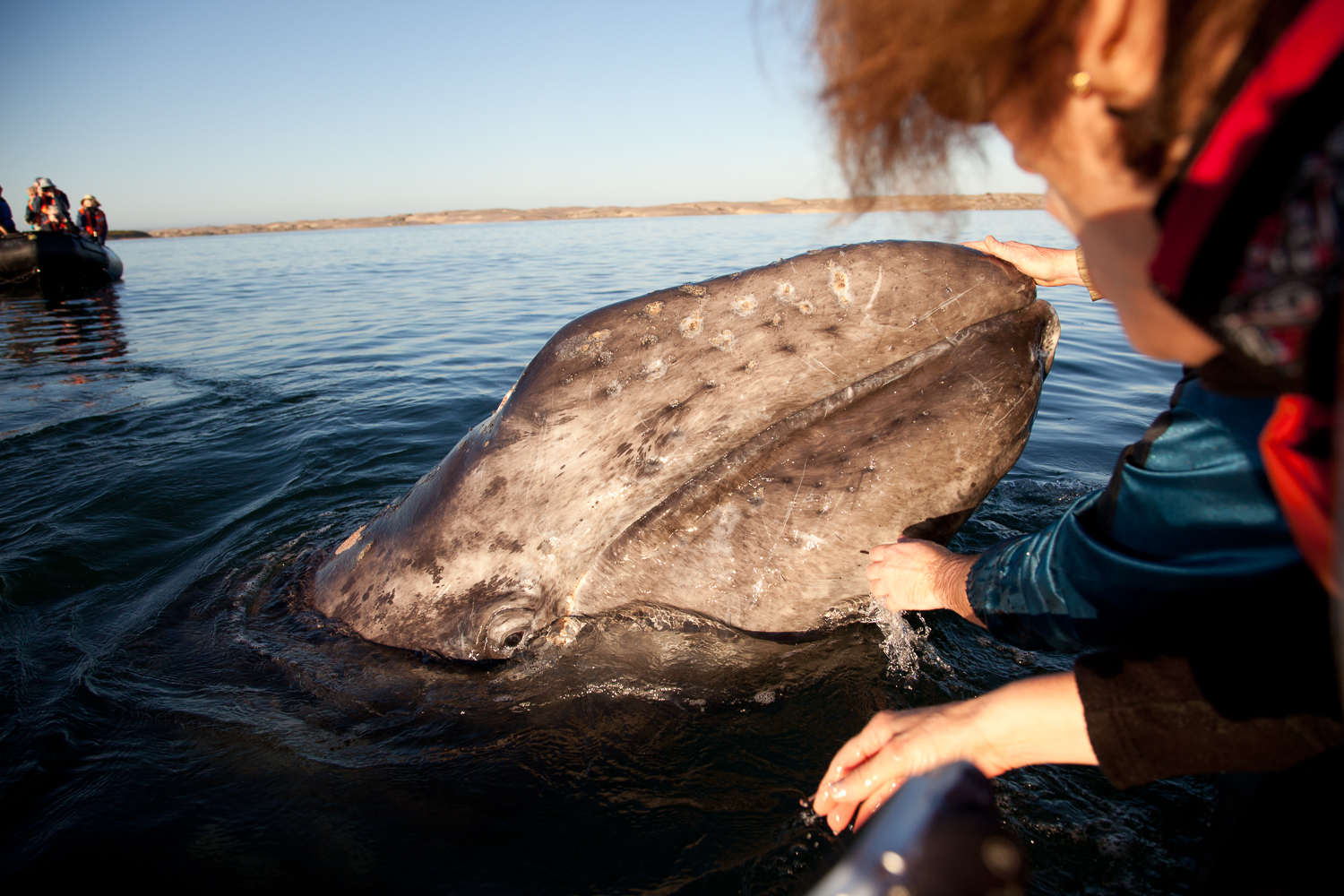 Frohoff agrees: “We do have compelling evidence of the experience of grief in cetaceans; and of joy, anger, frustration and distress and self-awareness and tool use; and of protecting not just their young but also their companions from humans and other predators. So, these are reasons why something like forgiveness is a possibility. And even if it’s not that exactly, I believe it’s something. That there’s something very potent occurring here from a behavioral and a biological perspective. I mean, I’d put my career on the line and challenge anybody to say that these whales are not actively soliciting and engaging in a form of communication with humans, both through eye contact and tactile interaction and perhaps acoustically in ways that we have not yet determined. I find the reality of it far more enthralling than all our past whale mythology.”

We may never know the real reason behind this spellbinding behavior—or whether these whales have forgiven or forgotten our transgressions against them. But anyone who has witnessed it firsthand knows this—there is magic in Baja and it is a privilege to share this planet with such mysterious and magnificent creatures.