Deep within Canada’s coastal temperate rainforest, the array of greenery is intense, almost hard to comprehend. Suddenly, glowing in contrast to a backdrop of verdancy, a ghost-white bear emerges and ambles by with a salmon snack in its jaws. It’s not—as one may guess—a very lost polar bear, but one even rarer to encounter: a spirit bear.

These elusive bears are found only in a small portion of British Columbia’s Great Bear Rainforest, the world’s largest coastal temperate rainforest. Spanning 250 miles along the Pacific coast, its sodden, old-growth forest conceals towering red cedars, glacier-sliced fjords, and one of nature’s most storied species within its mist- and moss-coated acres.

Spirit bears—also known by their scientific name, Kermode bears—are a pale variant of the North American black bear. They’re not considered albinos; they have pigment and share the dark eyes and noses of their black bear brothers. In fact, white-coated Kermodes are born with the same recessive genes that cause red hair in humans, and many have a strawberry-blond tint to their cream-colored fur. Fewer than 400 roam the rainforest, according to recent estimates.

Far better suited to animals than humans, the Great Bear Rainforest is made up of complex terrains where mountains meet serpentine inlets and a speckle of archipelagos. Roads and trails are sparse and many areas can only be reached by floatplane. And if you haven’t discerned from its name, some form of rainfall is a near-constant. Perhaps because of this, indigenous life is abundant. Grizzly bears and cougars, coastal grey wolves and Sitka deer, marine mammals like orca and humpback whales all inhabit these lands and waterways alongside some 20,000 First Nations people who have, for millennia, been devoted to protecting the thriving ecosystem they call home. 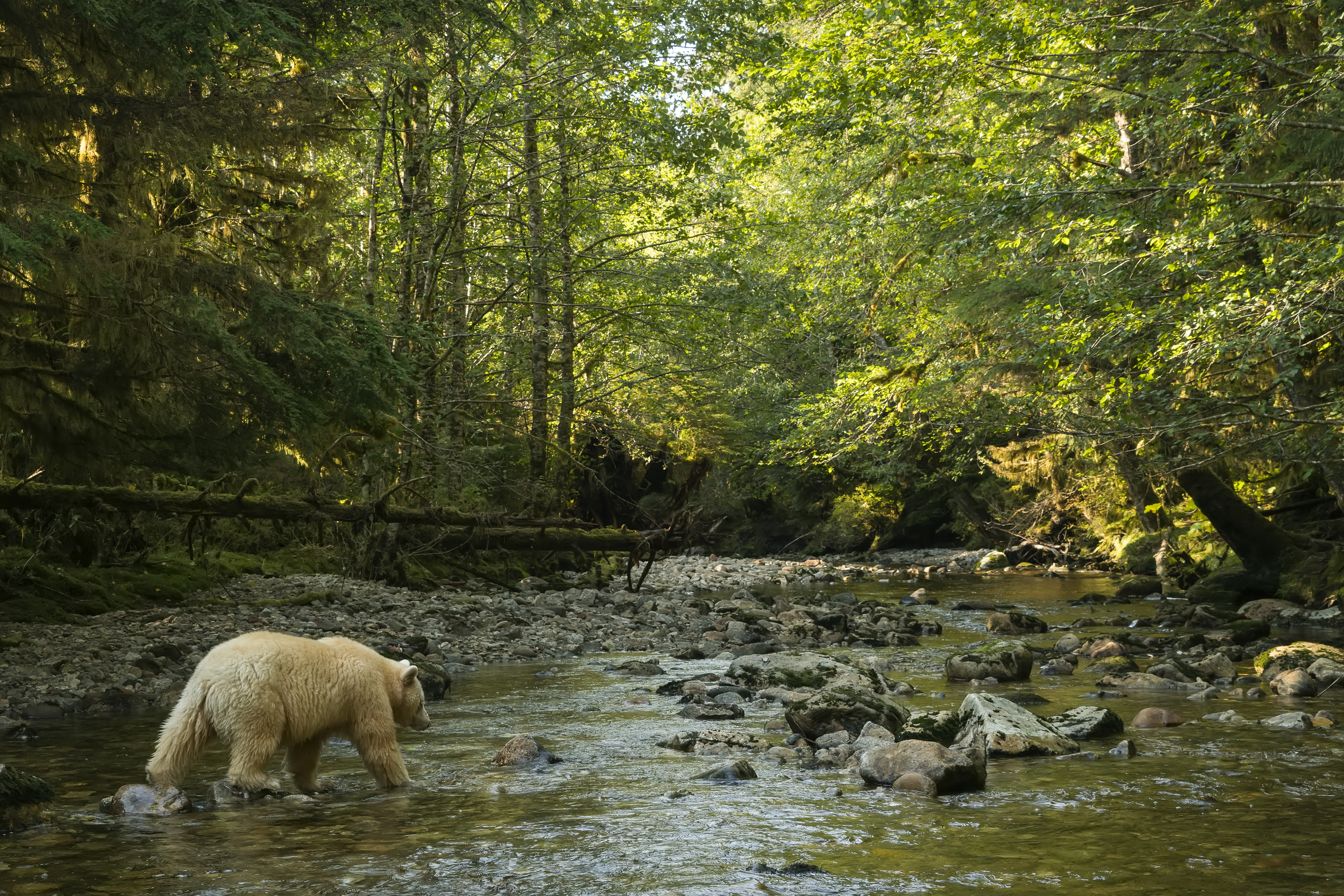 A lone spirit bear fishes in a secluded stream within the Great Bear Rainforest.

Though small in population, the spirit bear has undoubtedly become a galvanizing force behind these conservation efforts. For many years, First Nations elders kept the existence of the moksgm’ol—“white bear” in T’simshian languages—secret for fear of exposing them to fur trappers or trophy hunters. Now, its rarity and reverence appeal on both a scientific and cultural level. In Kitasoo/Xai’xais culture, legend tells that the creator, Raven, promised peace and safety for black bears provided that one out of every 10 is born with white fur to serve as a reminder of the stark and barren Ice Age.

Uncannily, that ratio just about holds true in recent research led by scientists and First Nations people and published in Ecological Solutions and Evidence in July 2020. Approximately one in 10 of the region’s black bears is white, meaning the genetic mutation is even rarer than previous estimates. And though it has been illegal to hunt spirit bears since the mid-20th century, researchers hope this study can prove a need for more protections for the area’s black bears—still subject to hunting permits—because we risk losing the dark-coated bears who carry the recessive gene. In 2016, the Canadian government permanently conserved 85 percent of the forest, protecting the lands from logging and sowing the seeds for a responsible ecotourism economy, but the fight continues to save the bears from potential oil pipeline development and climate change, as its impacts on the salmon population will reverberate through the entire rainforest.

To spot a spirit bear, your best bet is the during the salmon runs of August and September, depending on rainfall and several other factors. Currently, the largest concentration of bears can be found on Princess Royal Island and Gribbell Island, where a local guide will likely bring you to the area of a recent sighting to sit patiently, scanning the rocky shorelines for a flash of white.

Though not all who seek to encounter “Canada’s panda,” will be successful, the search itself is hardly disappointing in these enchanting lands. Few remaining places on earth allow one to bear witness to this immensity of unspoiled nature.

Enter the verdant domain of the spirit bear on our Voyage to Great Bear Rainforest, setting sail for the first time September 2021.

An Eco-Pioneer Leads the Way in ...