When Europeans heard tales of an unexplored land even farther north in the frozen Arctic than the remotest human settlements in the Russian Far East, the reports of these distant land sightings from Chukchi hunters inspired exploration. After failed attempts by others, the first known humans to land on what became known as Wrangel Island were men from an 1811 American expedition which included John Muir.

In Cruise of the Corwin, Muir’s account of the expedition, he wrote of the polar bears: “We found them everywhere in abundance along the edge of the ice, and they appeared to be very fat and prosperous, and very much at home, as if the country had belonged to them always. They are the unrivaled master-existences of this ice-bound solitude, and Wrangell Land may well be called the Land of the White Bear.”

What Muir and others didn’t know then was that more polar bears give birth on Wrangel Island than anywhere else on Earth; hence the island’s nickname, the “polar bear nursery.” Approximately 400 female bears dig dens every year and wait for the snow to close them in. In these protected shelters, they wait to birth their cubs, not technically hibernating as other bear species whose heart rates and body temperatures dip. Only pregnant polar bears—not males or females that are not pregnant—dig dens, and emerge several months later, cubs in tow.

In a frozen landscape straddling the hemispheres at the 180th meridian, this much-mythologized island is actually the most biodiverse location in the High Arctic. It is also now the northernmost UNESCO World Heritage Site. Wrangel Island supports the world’s largest population of Pacific walruses, 100 migratory bird species, and more than 400 species of plants—and that’s all in addition to having the world’s highest density of ancestral polar bear dens. Reindeer, muskox, arctic foxes, snow geese, and snowy owls also can be spotted along with gray whales that feed in the surrounding waters.

Although hard to believe, Wrangel was not completely glaciated during the last ice age. As a result, it’s thought to be the last place that woolly mammoths ever lived (their tusks and bones can still be seen!); and the Pleistocene-era records held in the island’s soil and flora give insights into ancient biodiversity that’s unique in all the world. 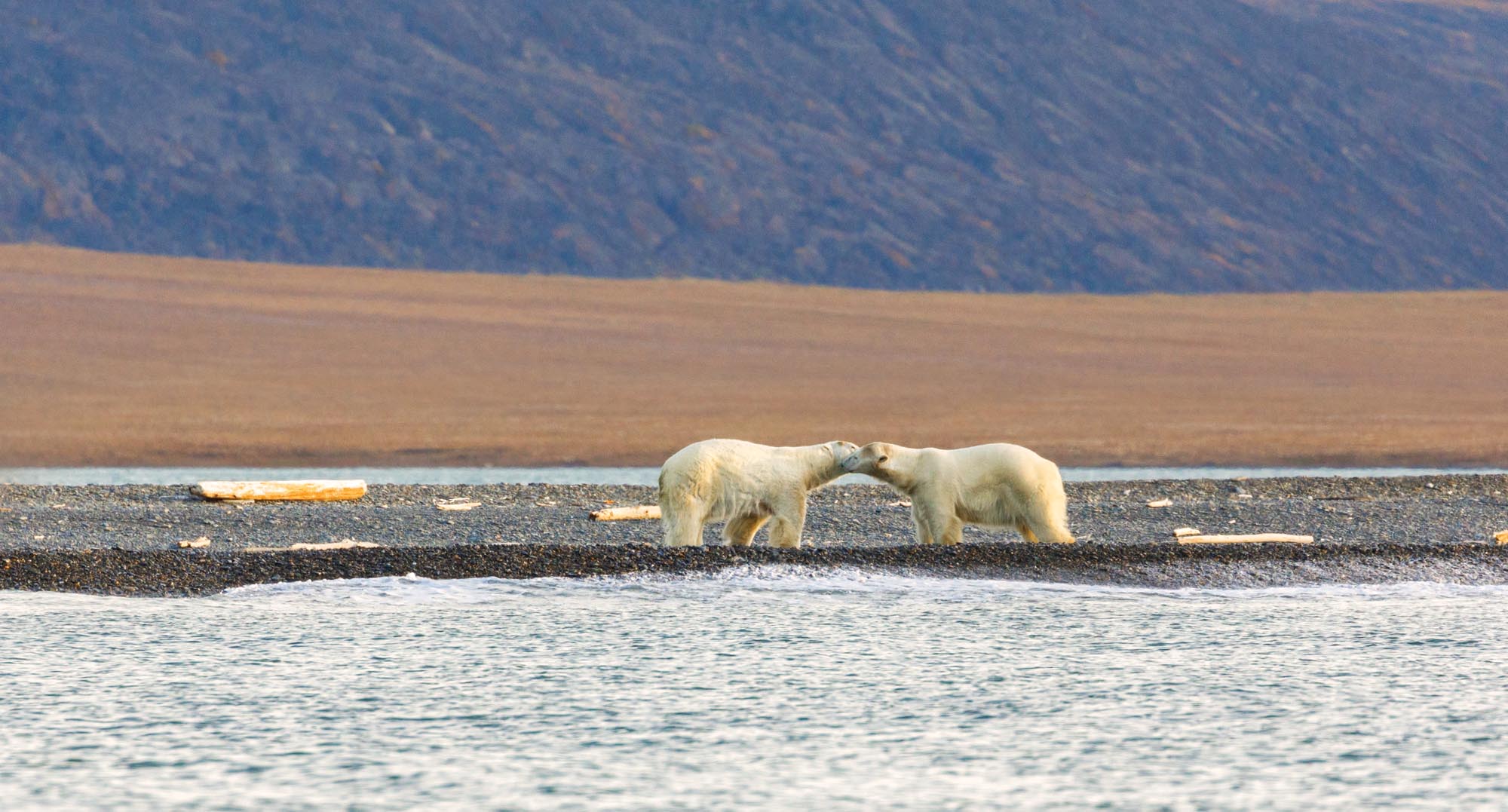 Woolly mammoths can no longer be spotted alive on Wrangel Island, but these days polar bears are plentiful. These are just some of the reports from past Lindblad-National Geographic expeditions:

“In a morning’s cruise along the northeast coast I counted 183 polar bears on shore—more bears together in one place than I had ever even imagined was possible… A lone bear crossing the tundra with fog pouring down the mountains behind it; five bears appearing one by one out of a low cave just above the beach; three bears climbing a cliff of dark rock beside a small waterfall.”

“They often strike the most incredibly relaxed poses with tummies in the air and limbs spread out in all directions.“

“Nothing short of breathtaking.”

Naturalist Edward Shaw expressed his awe: “This has been one of those days that will be forever etched in our hearts and minds as one of the most remarkable we have ever experienced as naturalists…We will collapse into our beds tonight with enormous thanks for the privilege of what we witnessed today.”

To give Muir the last word, here he expresses his awe and joy upon laying eyes on the polar bears on the ice pack around the island: “But the grand excitement of the day, apart from the untrodden shore we were seeking, was caused by three polar bears, magnificent fellows, fat and hearty, rejoicing in their strength out here in the bosom of the icy wilderness.”