You’ve heard that plastic is polluting the oceans — between 4.8 and 12.7 million tonnes enter marine ecosystems every year. But does one plastic straw or cup really make a difference? Artist Benjamin Von Wong wants you to know that it does.

At the end of January, the artist built a piece called “Strawpocalypse,” a stunning pair of 10-foot-tall plastic waves, frozen mid-crash. Comprised of 168,000 plastic straws collected from several volunteer beach cleanups, the installation made its debut at the Estella Place shopping mall in Ho Chi Minh City, Vietnam.

Just 9% of global plastic waste is recycled. Plastic straws are by no means the biggest source of plastic pollution, but they’ve recently come under fire because most people don’t need them to drink with and, because of their small size and weight, they cannot be recycled.

Von Wong likes to point out that every individual straw that’s part of his installation likely came from a beverage that someone sipped for only a few minutes. Once the drink is gone, the straw will take centuries to disappear.

“A lot of what I’ve been trying to do is make people realize that their actions do matter,” Von Wong told HuffPost. He wants his art to encourage people to reduce their plastic consumption. 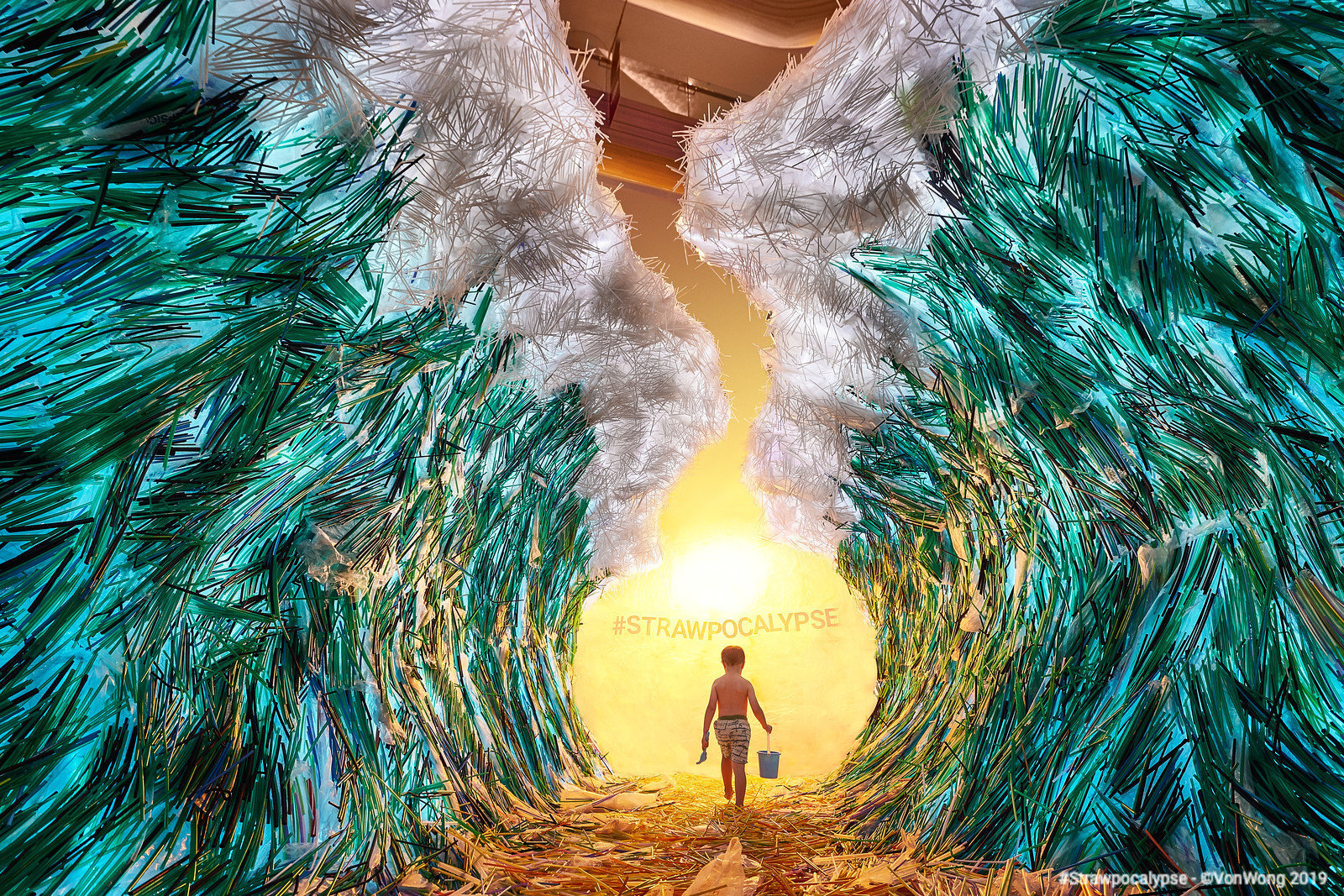 In March, Von Wong built another piece, “Plastikophobia,” an otherworldly cave built from 18,000 used plastic cups. He said that one of the most interesting experiences he had with that installation came while watching passersby interact with it. “I would watch people [stare at it] while carrying a drink with a straw and plastic cover in a plastic bag,” he noted. “It’s a really interesting paradox.” 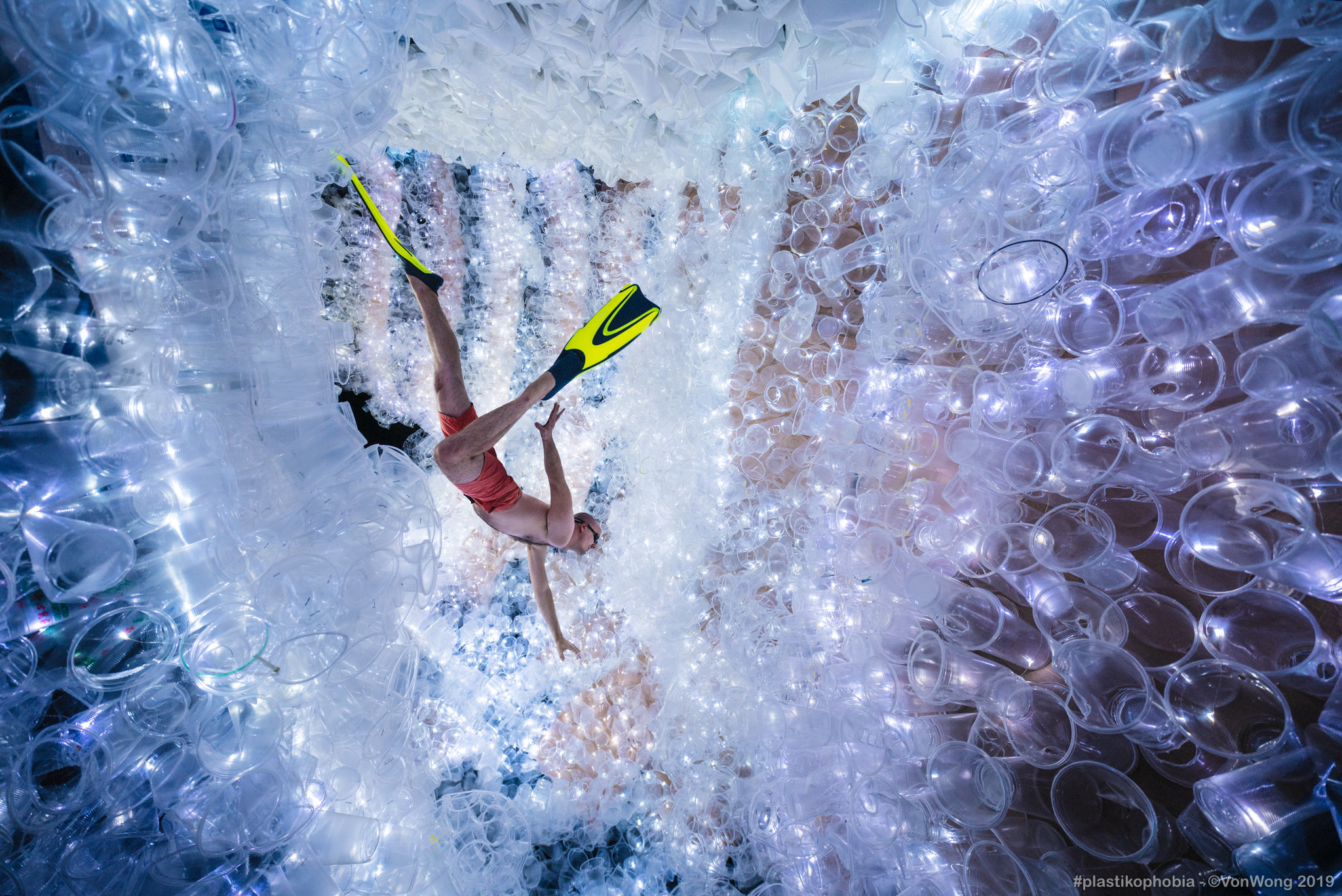 In a piece from 2018, Von Wong wanted to illustrate a specific statistic: Every 60 seconds, a truckload’s worth of plastic enters the ocean. For this work, titled “Truckload of Plastic,” Von Wong and a group of Greenpeace volunteers collected more than 10,000 pieces of plastic, which were then tied together to look like they’d been dumped from a truck all at once.

Plastic trash makes its way into the ocean from many different routes. In the waters around the United States, much of the floating plastic is from people’s litter ― items dropped here and there ― rather than mass dumping. In places like Indonesia, where trash-collection infrastructure is not as developed as it is in the U.S., garbage often gets dumped into rivers and washes out to sea. The U.S. also ships a lot of its plastic abroad, which makes proper disposal the recipient nation’s problem. 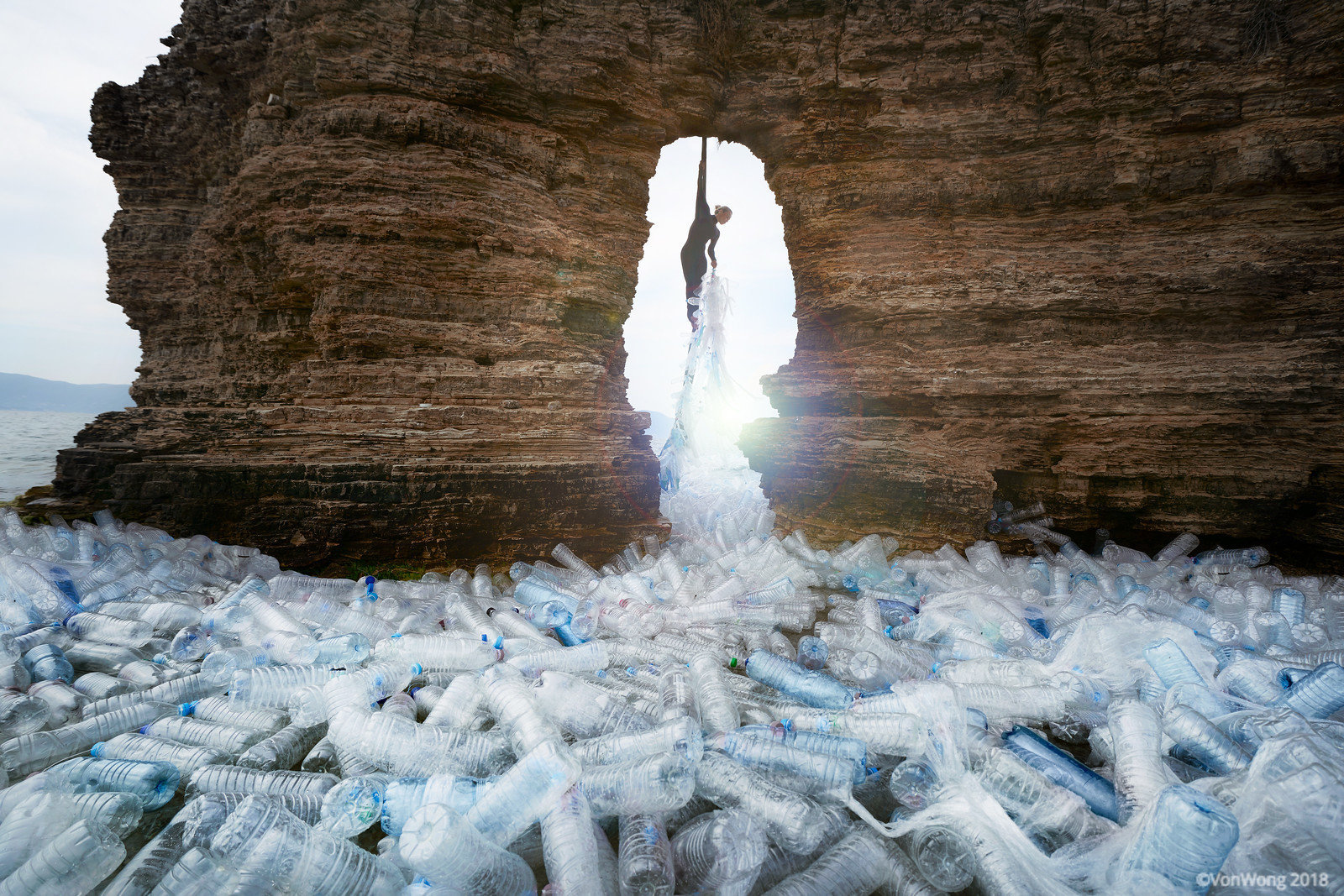 Global plastic production has quadrupled over the past 40 years, according to a study published in 2017. A separate study published this week in the journal Nature Communications found that the amount of plastic being dumped into the oceans has skyrocketed since the 1990s.

“Unless we [stop] plastic at the source, cleanups and recycling alone [will] never be enough,” Von Wong wrote in a blog post published alongside his “Truckload of Plastic” project.

“It’s a lie that wasteful consumers cause the problem and that changing our individual habits can fix it,” Matt Wilkins, an ecologist and evolutionary biologist, wrote in an op-ed for Scientific American.

“Corporations should pay for the damage they cause,” British politician Geraint Davies wrote for The Guardian. “Only then will they be forced to create environmentally friendly alternatives.”

For their part, big corporations do seem to be in an exploratory phase of finding solutions to the plastic crisis. For instance, dozens have signed on with Loop, a new service that sends people goods in recyclable packaging that can be sent back to be cleaned and reused.

This article has been updated to correct the year that the “Truckload of Plastic” installation was completed, which was incorrectly given initially as 2016.

This article was written by Kate Bratskeir from Huffington Post and was legally licensed through the NewsCred publisher network. Please direct all licensing questions to legal@newscred.com.