In 1922, British archaeologist Howard Carter discovered the untouched tomb of Tutankhamen, a minor pharaoh who ruled over Egypt almost 3,300 years ago. When Carter entered the tomb for the very first time and asked if he could see anything, he famously responded: ”Yes, wonderful things.” Tutankhamen’s burial chambers were filled with statues made of ivory, items made of gold and precious jewelry. In a treasure chest, Carter discovered a large pectoral, a breastplate decorated with gold, silver, various precious jewels and a strange gemstone, that the pharao wears across his chest. The breastplate shows the god Ra as a winged scarab, made from a yellow-green gemstone, carrying the celestial bark with the Sun and the Moon into the sky. 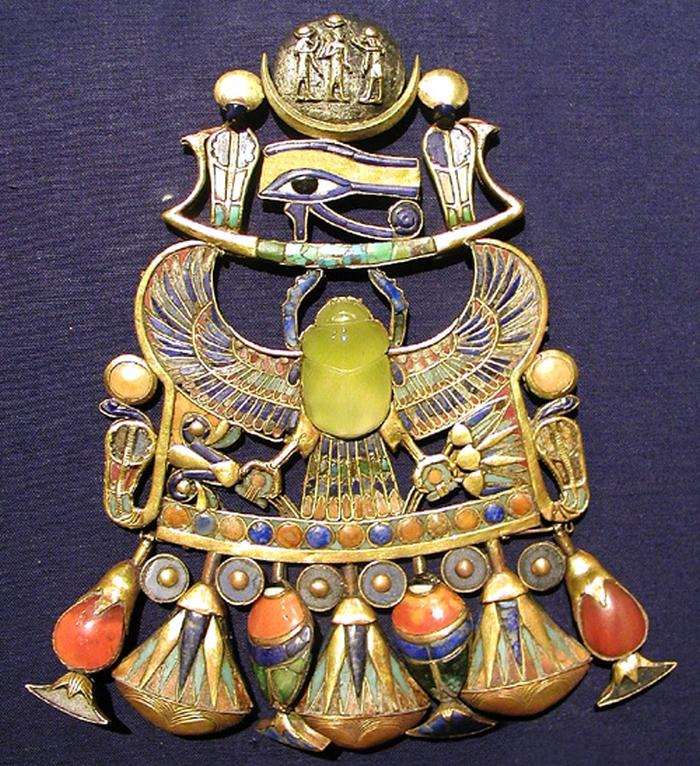 Carter identified the gemstone at first as chalcedony, a common variety of the mineral quartz. In 1932 the British geographer Patrick Clayton was exploring the Great Sand Sea along the border of modern Egypt and Libya. Here he discovered some strange pieces of glass in the sand. The yellow-green material seemed to be identical to the gemstone found in Tutankhamen’s tomb. Two years later he published a short note, suggesting that the pieces of glass were the quartz-rich deposits of a completely dried up lake. In 1998, Italian mineralogist Vincenzo de Michele analyzed the optical properties of the gemstone in King Tut’s breastplate and confirmed that it was indeed a piece of Libyan Desert Silica Glass, as the material is nowadays called. Libyan Desert Glass consists of almost pure silicon-dioxide, like quartz, but its crystal structure is different.  It also contains traces of unusual elements, like iron, nickel, chromium, cobalt and iridium. It is among the rarest minerals on Earth, as it is found only in the Great Sand Sea north of the Gilf Kebir Plateau, one of the most remote and desolate areas in the Libyan Desert. 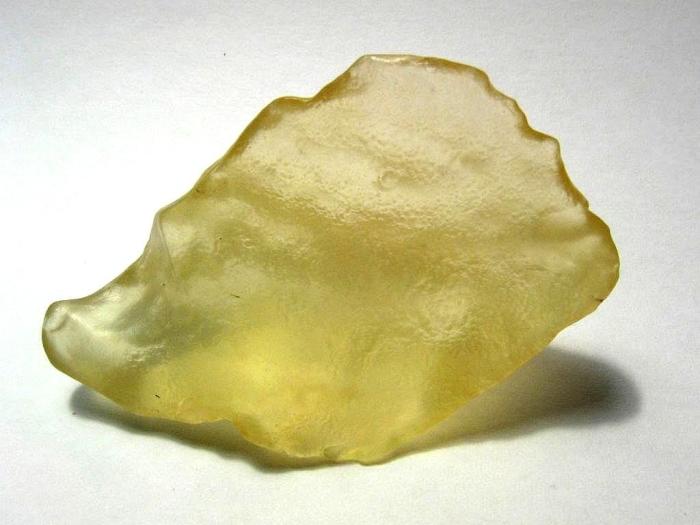 The origin of the desert glass has long remained a mystery. Glass forms naturally when molten rock material cools so rapidly that atoms are unable to arrange themselves into a crystalline structure. Obsidian is a natural glass that forms when lava from a volcano rapidly cools and solidifies. However, no extinct volcano can be found near the site where the desert glass occurs. Tektites are natural glass formed when the debris of a meteorite impact is ejected high into Earth’s atmosphere, where the molten debris will rapidly cool and solidify into glass spherules. Tektites have been found across Asia, Australia and as far away as Antarctica. However, no impact crater associated with the desert glass is known in the Libyan Desert. In an alternative scenario proposed in 2013 a comet, composed mostly of ice, entering Earth’s atmosphere may have exploded mid-air above the desert. The generated heat burst, an estimated 2,000°C, would be sufficient to melt the upper layers of the sand dunes, forming the desert glass, but without leaving a crater behind.

A new study published in the journal Geology refutes this scenario, claiming that an airburst alone wouldn’t be sufficient to explain the formation of the desert glass. The researchers analyzed grains of the mineral zircon found in the desert glass, discovering that the supposed zircon grains are actually a very rare mineral called reidite. Reidite is chemically similar to zircon, however, displays a different, denser crystalline structure. Reidite forms only under very high pressure, es experienced during massive meteorite impacts. Reidite can’t form by the low pressure of an airburst. Airbursts, as the researchers argue, create shock waves in Earth’s atmosphere with pressures of some thousands of pascals. During a meteorite impact, the shock waves in the ground can reach some billions of pascals, millions of times more powerful than any airburst. Only a meteorite impact on the ground, generating enough pressure to form the reidite and enough heat to melt the sand, can explain the stray field of desert glass fragments found in the Lybian Desert. However, it remains unclear where the impact crater associated with the Lybian Desert Glass is located, even if radiometric dating suggests that the impact happened around 28 to 26 million years ago.

It’s also unclear how the desert glass became part of Tutankhamen’s treasures. Archaeological evidence suggests that an ancient system of caravan routes existed around the Gilf Kebir Plateau, but it doesn’t seem that the routes were used to search or trade for the desert glass. It seems that the piece used for the scarab was discovered by chance or maybe an exotic gift. It remains the only known example where an Egyptian artist used this mysterious material.

This article was written by David Bressan from Forbes and was legally licensed through the NewsCred publisher network. Please direct all licensing questions to legal@newscred.com.