Microplastics Have Invaded Some Of The Planet’s Most Remote Places

Microplastics Have Invaded Some Of The Planet’s Most Remote Places

A key reason plastic trash is so damaging to the environment is that it doesn’t disappear ― it breaks into small pieces called microplastics that can linger for decades or more and can travel on the air, in water, and inside living creatures.

Scientists around the world now issue frequent warnings that these plastic particles are nearly everywhere. They’ve been found on the planet’s highest peaks and in the lowest trenches.

The United Nations Environment Program estimated in 2014 that the scourge of plastics in our seas causes at least $13 billion in damage annually to marine ecosystems (at the time, the UNEP said that figure was likely a “significant underestimate”).

Scientists have also speculated the problem will soon be so widespread that the material will wind up in the geological record.

“Once buried, being so hard-wearing, plastics have a good chance to be fossilized ― and leave a signal of the ultimate convenience material for many million years into the future,” Jan Zalasiewicz, a professor of paleobiology at England’s University of Leicester, said in a 2016 paper. “The age of plastic may really last for ages.”

Here’s a look at some of the more far-flung places plastics have appeared on our planet. "Plastic litter is an increasing global issue and one of the key environmental challenges we face on global scale," a researcher who found plastic in a remote region of the French mountains said last month. 1Tomm via Getty Images

In an isolated section of the French Pyrenees.

Researchers expressed astoundment last month after discovering microplastics in a secluded region of the Pyrenees mountain range in France, about 75 miles from the nearest town. The scientists speculated that the plastic particles — so small you can’t see them with the naked eye — were transported by the wind to an area thought to be as close a representation of a pristine environment as exists.

“It opens up the possibility that it’s not only in the cities” that people are breathing in plastic, but that “it can travel quite some distance from the sources,” Steve Allen, a lead researcher on the study said at the time.

This wasn’t a one-off finding. Allen and his team found a daily average of 365 deposits of microplastics over an area of a square meter. In an interview with The New York Times, Allen described the material as like dust from the Sahara Desert, blowing across the planet.

At the bottom of the Mariana Trench.

Researchers said last year they observed heavy doses of microplastics at the bottom of the Mariana Trench, the deepest known place on the planet.

In the trench’s most polluted areas, researchers at the Chinese Academy of Scientists said they counted as many as 2,000 pieces of microplastics in a liter of water. 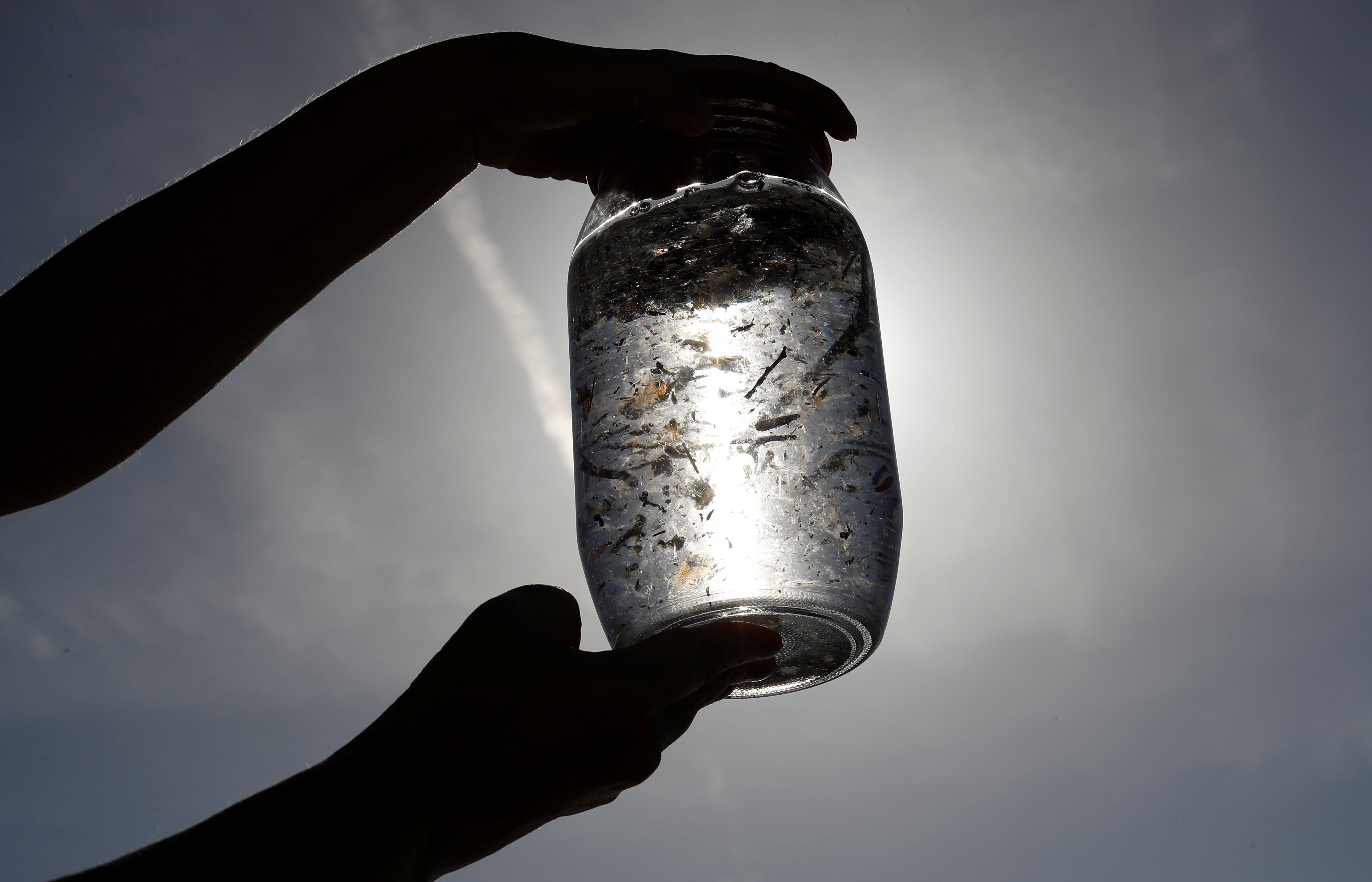 Microplastics have been seen at the bottom of the world's deepest ocean trenches. In 2018, researchers looking at deep-sea images 36,000 feet beneath the surface saw a plastic bag floating by. Eric Gaillard / Reuters

“These results suggest that manmade plastics have contaminated the most remote and deepest places on the planet,” the researchers wrote.

Earlier in 2018 scientists scouring the Deep-Sea Debris Database, an effort to catalogue such things, said they found the deepest-ever piece of plastic trash: A plastic bag floating in the Mariana Trench some 36,000 feet deep.

In Arctic and Antarctic sea ice.

Greenpeace noted in 2018 that it found plastic waste and traces of dangerous chemicals in water and snow samples in Antarctica. Aside from microplastics found in more than a dozen water samples, the environmental group said it saw large pieces of waste linked to commercial fishing in the area, including buoys and fishing nets drifting by.

“We may think of the Antarctic as a remote and pristine wilderness,” Frida Bengtsson, who works on Greenpeace’s Protect the Antarctic campaign, said in a statement at the time. “But from pollution and climate change to industrial krill fishing, humanity’s footprint is clear. These results show that even the most remote habitats of the Antarctic are contaminated with microplastic waste.” Greenpeace found plastic and dangerous chemicals in more than a dozen samples in Antarctica in early 2018. Alexandre Meneghini / Reuters

German scientists said earlier in 2018 that they found record levels of microplastics in sea ice throughout the Arctic. The researchers noted that as sea ice thaws at increasing rates due to climate change, the plastic will eventually make its way back into the water column where it will have unknown effects on wildlife.

“No one can say for certain how harmful these tiny plastic particles are for marine life, or ultimately also for human beings,” Ilka Peeken, a researcher at the Helmholtz Centre for Polar and Marine Research, told BBC News at the time.

Many remote islands have been coated by ocean plastics for years, but some are so far from civilization that researchers are perpetually stunned by the levels of pollution.

Henderson Island, which lies some 3,000 miles from the nearest major population center in the middle of the eastern Pacific Ocean, was declared a UNESCO World Heritage Site in 1988. The U.N. agency says the area is “one of the few atolls in the world whose ecology has been practically untouched by a human presence.”

But in 2017, scientists declared Henderson as having the highest density of plastic waste anywhere in the world. By some estimates, more than 37 million pieces of plastic are on the island. 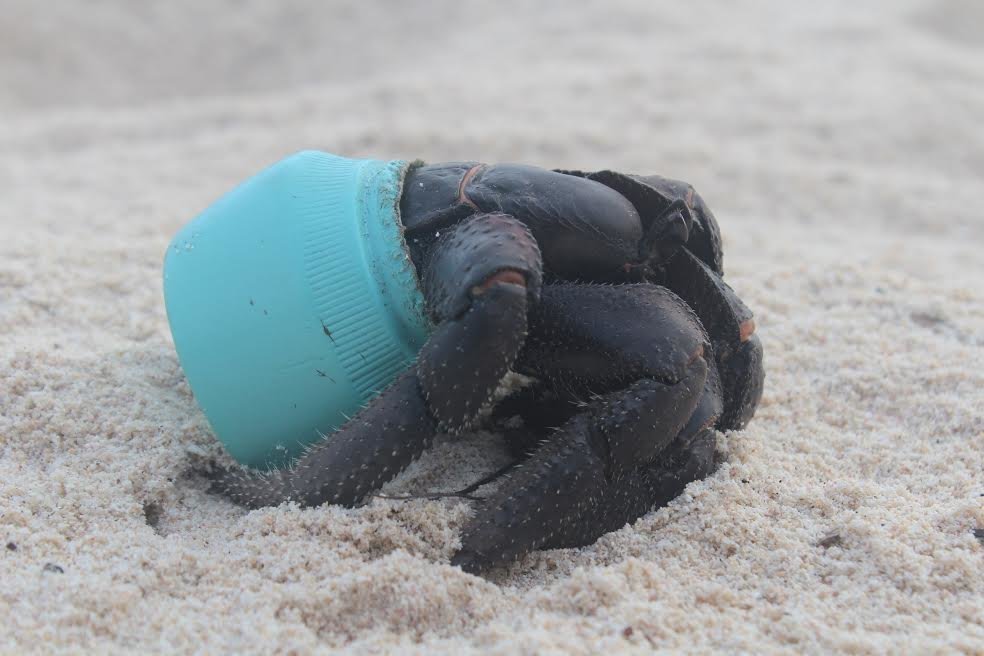 Hundreds of crabs make homes out of plastic debris on Henderson Island in the Pacific Ocean. This crab inhabits an Avon cosmetics jar. Jennifer Lavers

This article was written by Nick Visser from Huffington Post and was legally licensed through the NewsCred publisher network. Please direct all licensing questions to legal@newscred.com.