Even the most seasoned cruiser will find the sailing experience on Sea Cloud different than any other at sea. With only 32 cabins spread over three decks, the ship has the intimacy of a yacht. The level of personal service is distinctive, too: A maximum capacity of 64 makes the number of passengers almost equal to the number of onboard crew.

Most unique, however, is Sea Cloud’s ambiance—one that couples an authentic sailing experience with pampered luxury.

From the moment of embarkation, it’s impossible for guests to forget they’re on a salty historic vessel of a bygone era. This four-masted tall ship (whose masts are made of wood rather than aluminum) has 29 sails measuring an impressive 32,000 feet in area. 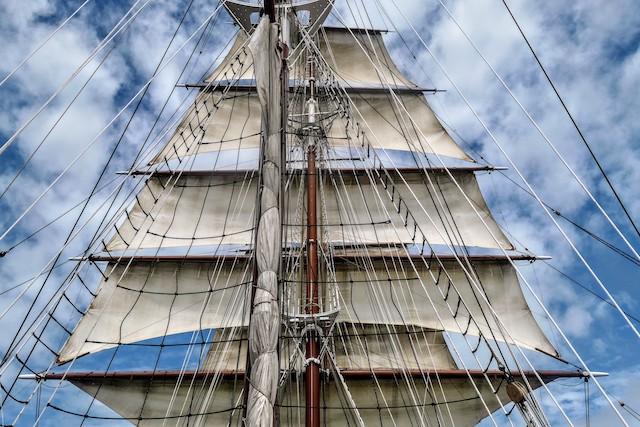 The main mast, the highest point on the ship, towers some 178 feet above the deck. When crewmembers scale the rigging to hand set the huge sails, these very agile but normal-size humans appear diminutive. (Sea Cloud is the only passenger sailing ship that still sets sail manually without electronic controls.) Down on the main deck, lines (halyards) need to be coiled or uncoiled as the sails are hoisted or lowered. 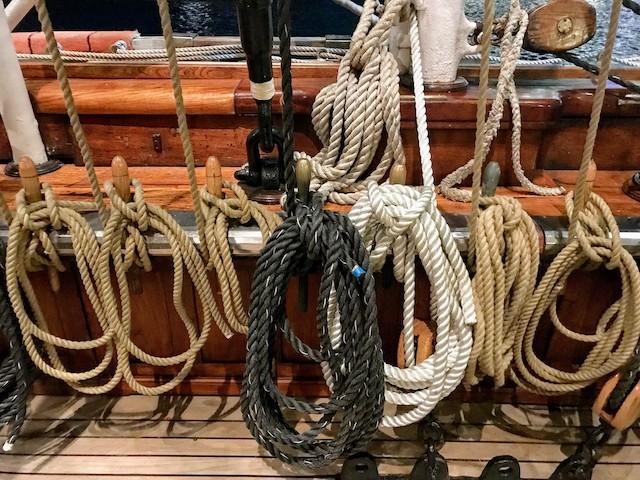 Coiled rigging on the Main Deck of Sea Cloud

Because Sea Cloud was built at a time when some modern safety regulations were either lax or non-existent, the vessel was totally overhauled in 1979. Ongoing maintenance and periodic refurbishment keep it looking shipshape and functioning efficiently and safely. All the mahogany, teak and brass on the decks require continuous care to preserve their luster so someone is always sanding or polishing something. 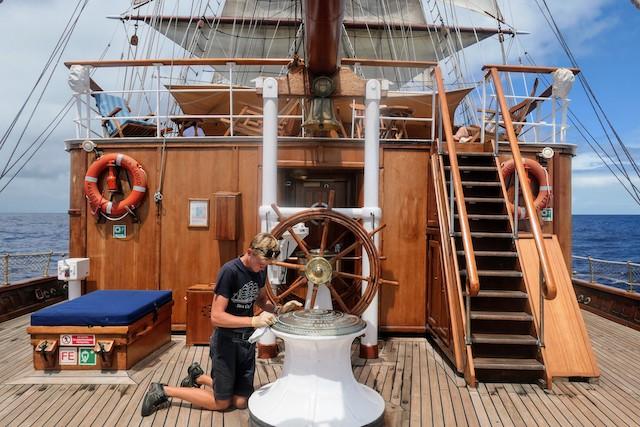 Those who want to learn more about sailing can speak to crew or even work alongside them as they hoist the sails and handle the lines. Or they can learn about knots at an onboard lecture or ask questions of the ship’s captain who maintains an open bridge policy. 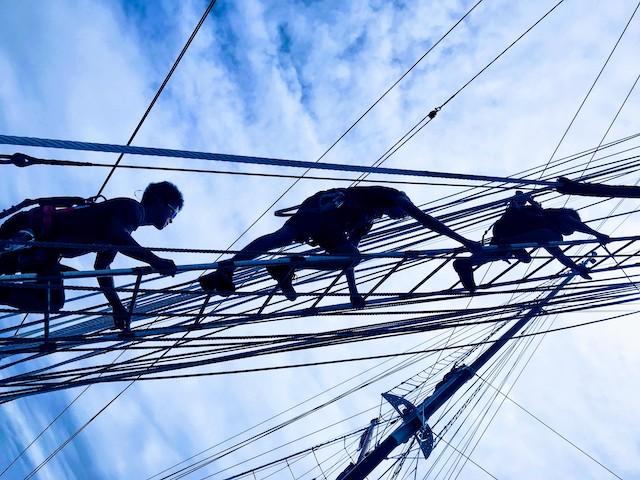 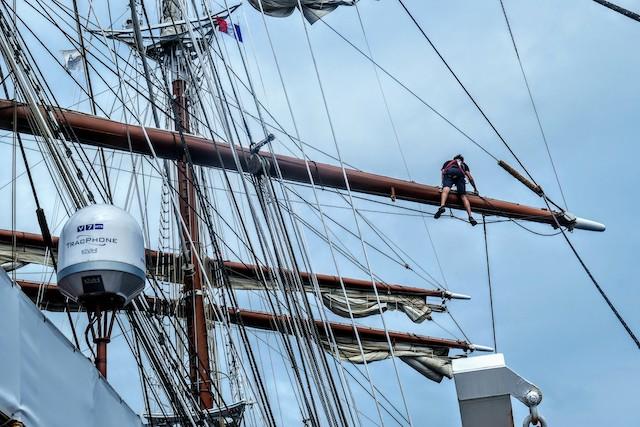 A crew member working on one of the ship’s booms

The gentle listing caused by winds and changing tides is a persistent reminder that the ship is at one with the sea.

A yacht with a storied past

When today’s Sea Cloud was christened in 1931, it was the largest private sailing yacht in the world. Financier E.F. Hutton and socialite/heiress Marjorie Merriweather Post (founder of General Foods Corporation) commissioned the windjammer as their personal yacht to visit exotic locales with their family, friends and business associates. No expense was spared to outfit it with the finest décor and accoutrements.

After the couple divorced in 1935, Mrs. Post assumed sole custody of the ship she had helped design. When she remarried Joseph E. Davies, an old friend who would become the American ambassador to Moscow, Sea Cloud became a virtual floating embassy and center of diplomacy.

During WW II, the sturdy German-built ship was called into service: The U.S. Coast Guard chartered it for one dollar and equipped it with anti-submarine technology, using it primarily as a weather recording station under the name IX-99. The yacht was returned to its owners after the war and underwent a four-year, $7.5 million makeover to recapture its stately appearance.

In the 50s, Post decided to sell Sea Cloud. Because of the high costs of maintaining the vessel and keeping crew, the ship passed through a number of hands—including those of Dominican Republican president and dictator, Raphael Trujillo, who had been a frequent guest onboard. In 1979, a group of German businessmen rescued the legendary ship and restored it to its former glory as a passenger ship. Between 2010 and 2011, the legendary ship was updated again to conform to new Safety of Life At Sea (SOLAS) regulations.

While Sea Cloud serves an upscale, international clientele, the tenor is decidedly relaxed and casual. On a small ship like this, it’s easy to make fast friends. 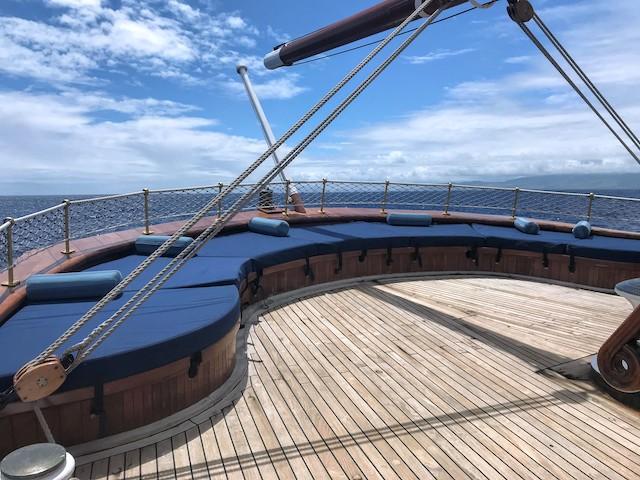 The Blue Lagoon, a quiet place to relax, read a book or catch some rays at the stern of the ship

Among the different cabin configurations, none are as posh (or spacious) as the two owners’ suites that were meticulously furnished and decorated by Mrs. Post. Six other original cabins, also located on the main deck, exude the same 1930s charm and elegance. Post also once owned Mar-A-Lago, the Palm Beach property now used as a private club and winter White House by President Donald Trump. One guest who visited the Florida property and stayed in the owner’s suite on Sea Cloud remarked how the furnishings of the two looked so similar. 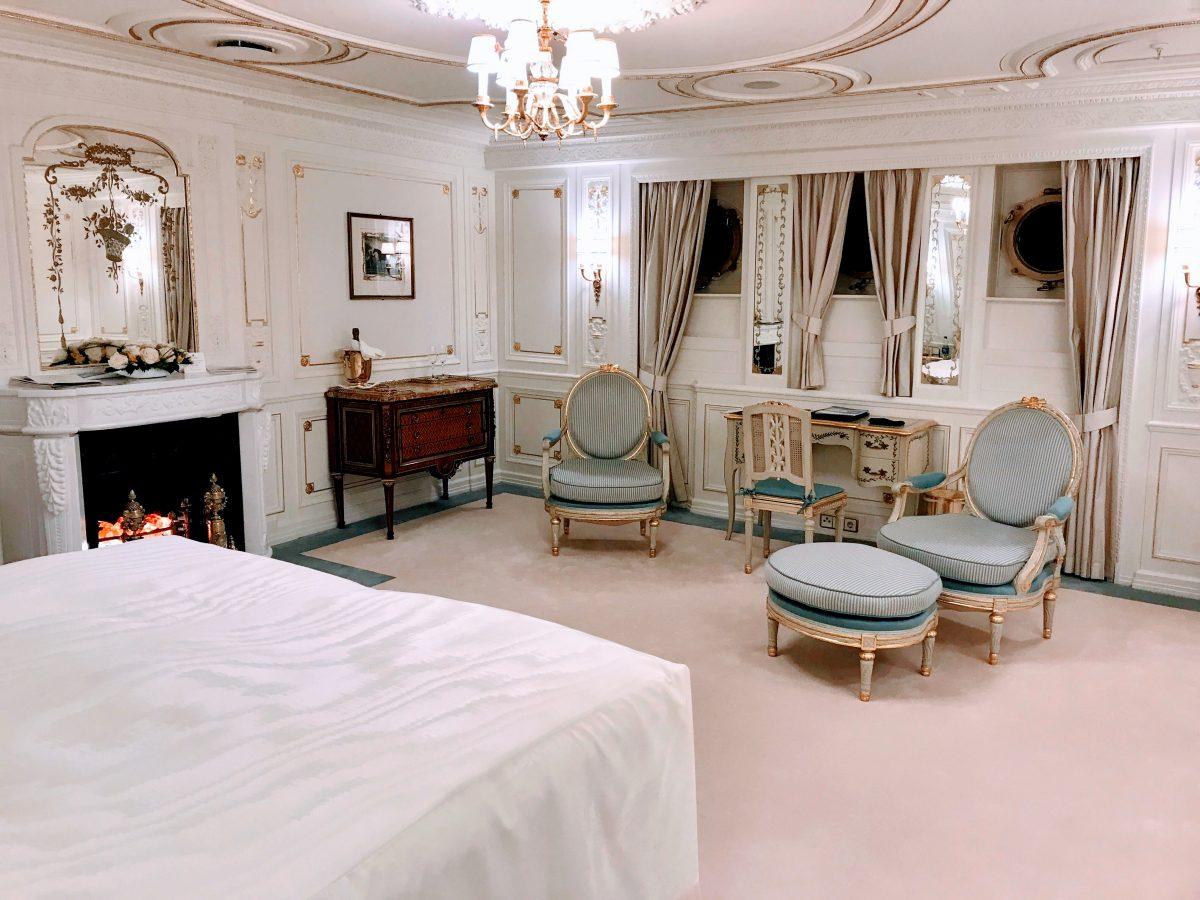 A Who’s Who of guests have stayed in these cabins, including James Michener, Walter Cronkite, Donald Rumsfeld, Ross Perot and Robert McNamara and, of course, actress and philanthropist Dina Merrill, the daughter of Post and Hutton, who spent much of her childhood onboard. Those who crave an even saltier experience can book one of the four former officers’ cabins, which are pared down but as lovingly restored.

Like a private yacht, none of the cabins have door locks and regardless of size, all are tastefully appointed—offering ample storage space and twice-a-day housekeeping, Occitane toiletries, and minibars stocked with complimentary soft drinks and bottled water.

Sea Cloud is known for its culinary excellence. When the dinner bell rings, tastily prepared and beautifully presented multi-course dinners are served in the cozy but elegant, wood-paneled restaurant on the Promenade Deck. Galley crew “goes overboard” catering to guests’ food allergies, sensitivities and preferences. Lunch buffets on the Lido Deck are outstanding in terms of both quality and abundance. Wine and beer are complimentary with meals. 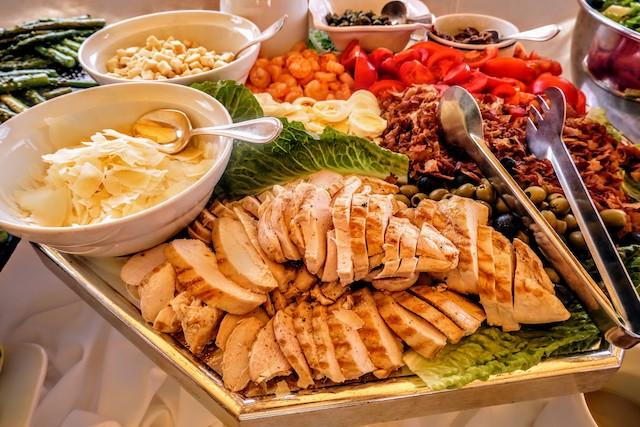 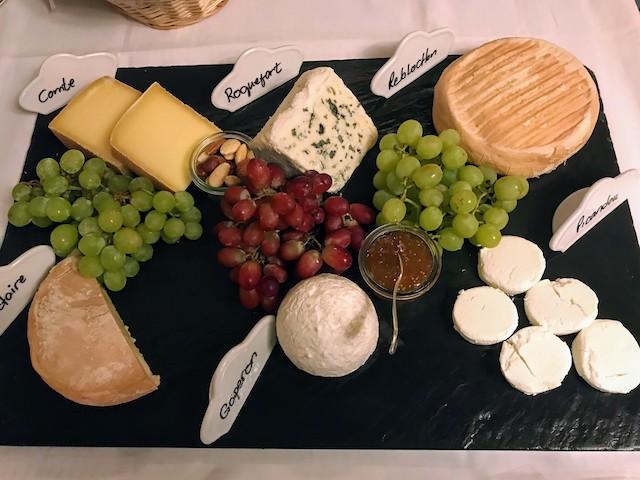 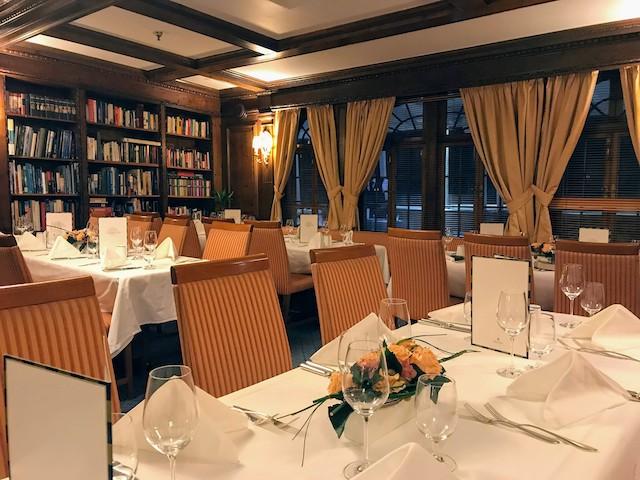 The restaurant on Sea Cloud being readied for dinner 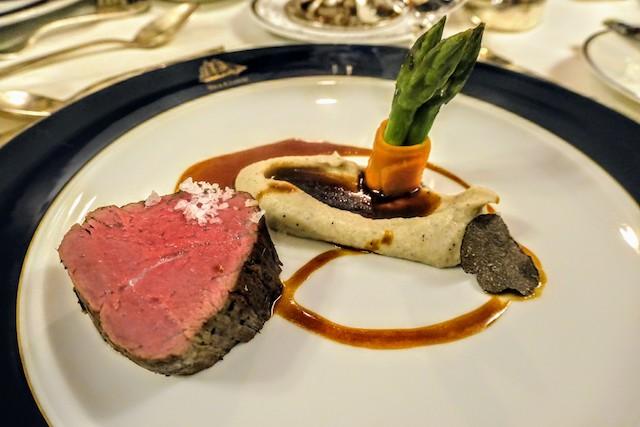 An expansive daily buffet breakfast offers hot and cold choices with freshly baked breads and pastries. Many meals are themed (e.g. either to an ethnic cuisine or port) and paired with musical entertainment.

Sailing the seas, with a new ship on the horizon

Depending on the season, Sea Cloud sets sail on the Caribbean, Baltic and Mediterranean Seas. The vessel’s small size allows it to visit smaller ports with fewer ships. In addition to its direct bookings (sometimes tied to special events on land or sea), companies like Lindblad and National Geographic book whole-ship charters of Sea Cloud for their expedition cruises. 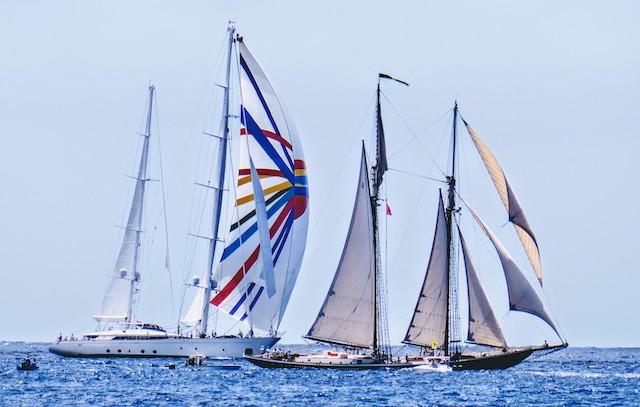 Passengers on Sea Cloud had a front row seat for the St Barths Bucket Regatta, a top-class sailing event

Often called “the most romantic ship in the world, it is a popular venue for weddings and celebrating milestone anniversaries. 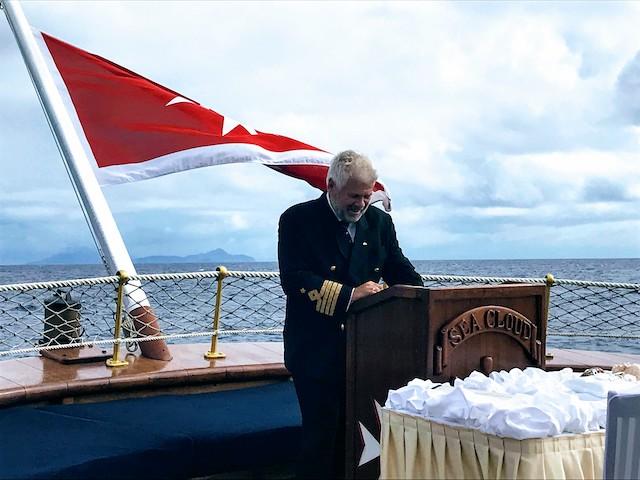 Captain Evgeny Nemerzhitskiy officiates at a wedding aboard Sea Cloud

Sea Cloud garnered a coveted five-star rating in the 2019 Berlitz cruise ship guide but the appeal of a luxury ship like this one is by no means universal. After all, Sea Cloud has no pools, no casinos or spas, no specialty restaurants, no room service, no children’s programs and no television.

However, Sea Cloud’s appeal to the niche market of sophisticated travelers who love sailing and slow travel is robust. Some 60 percent of passengers are passionate repeaters who appreciate the ship’s just-right size, top-notch cuisine, exceptional crew (some of whom have worked on the ship for more than a decade) and rich nautical legacy. One guest professing her love for Sea Cloud called it a “ship with a soul.”

Based on its popularity and that of its sister ship, Sea Cloud II, the company will be launching a third sailing ship, Sea Cloud Spirit, a brand-new build with expected delivery by September 2020. The environment-friendly ship will hold 136 passengers in 68 cabins, and offer new and expanded itineraries.

This article was written by Irene S. Levine from Forbes and was legally licensed through the NewsCred publisher network. Please direct all licensing questions to legal@newscred.com.