As the director of the Alaska Whale Foundation (AWF), Andy Szabo studies the fascinating cultural behaviors of humpbacks in Southeast Alaska—and oversees critical research that’s helping to better understand and protect the health of this very special population. Thanks to a longtime, exclusive partnership between Lindblad Expeditions and AWF, he regularly comes aboard our ships in Alaska to share his latest findings and observe whales alongside our guests. Andy recently took time out to share some of his best whale wisdom.

Anything a humpback has ever been observed to do, it’s also been observed doing here in Alaska—but there are also a number of things they’ve been observed doing here that they’ve not been seen doing anywhere else on Earth, including cooperative bubble-net feeding. And within the population of about 4000-6000 humpbacks in SE Alaska we have really only identified 50 or 60 whales that routinely engage in this fascinating, coordinated behavior. These working groups, which we’ve been observing for over 25 years, stay together for decades and have learned to divvy up their roles—you have your bubble blowers and your vocalizers, and the one who corrals the fish. So, it is a pretty remarkable population and of course everything is set against this incredible backdrop of Alaska’s rain forest, glaciers, and mountains.

What can guests expect when spending time with you on a Lindblad ship?

When you’re out on the water and you see these animals it’s not always clear what’s going on or just how special these encounters are until someone can come along and illuminate some of the really intriguing behaviors happening. I can point to a specific individual and say “look for these flukes here” or “see that whale there, that’s Melancholy and she’s had this many calves and we know everything about her”, or “that whale there is 70 years old, a leader of this group, and one of the most remarkable individuals anyone has ever observed in the wild.” Once people start to hear those kinds of things it really changes the whole experience and resonates a lot further with them.

How has Lindblad been able to help your efforts?

We’ve asked your captains and staff to help deliver real-time information on the whereabouts of specific animals we’re looking for. And since Lindblad vessels travel a lot further than we can, they can also give us information from areas we aren’t able to frequent. On the flip side we’re compiling all this data so on any given day when your expedition leaders know they’re going to be in an area where we’re working they can contact us and we can steer them where we’ve been encountering either large numbers of whales in general or more often these specific groups of bubble-netting whales which everyone wants to see. So we’ve developed a really nice back-and-forth relationship. 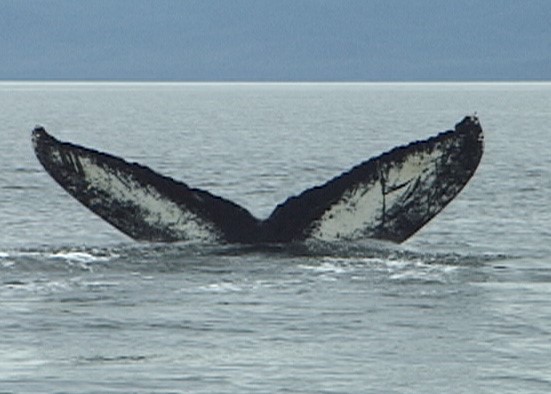 This is Viking Petal, my favorite whale who I’ve seen for over 18 years. He has this way of appearing at the right place at the right time—we can go an entire year and just happen to be cruising through Frederick Sound and he pops up. Here, we photo ID-ed him using the fluke prints on the underside of his tail—they are like 15-foot-high billboards advertising each whale’s identity.

Is there a particular project you’re currently working on that’s inspiring you?

Yes! We’ve started to use drones armed with high-resolution cameras and laser altimeters to fly over whales and take photos. Some of those photos can actually help us estimate body mass and body condition of individual whales. This is something that has become increasingly important over the last few years because we’ve been observing a growing number of emaciated whales, and the number of calves being produced is at a record low for three years in a row. With these drones we’re working to create a baseline so we know what the population tends to look like and can track it over multiple years to provide some insight into why we’re seeing so many skinny whales. We’re also using some drones (aka our snotbots!) to fly over and collect whale blow samples. You can actually use the mucus-like substance they exhale to do genetic analysis and hormonal testing to determine if the whales are chronically stressed.

When is your favorite time to visit Alaska?

People ask me that all the time and bar none I’d have to say it’s May. First of all the weather is spectacular—you have the most days of sun, spring comes out in full force so hiking around the forest the birds are all singing and everything is verdant and lush. You also find humpback whales doing some of the more interesting behaviors we’ve been observing of late including depredating. They exploit juvenile salmon being released from hatcheries in the area which means you frequently find solitary whales just moving up and down literally feet from the shore bubble-netting alone over and over again on salmon in four feet of water. It’s something I’d never seen 10 years ago, a new behavior, and it’s pretty cool to watch!

August is also a really wonderful time to predictably see large numbers of whales and of course when you have bears grabbing salmon right out of the water and many other iconic wildlife moments that tend to happen later in the season.

What’s next for AWF?

We just had a board meeting and identified a 5-to-10-year vision, and man it is big! We recently purchased a small facility on Baranof Island that we turned into a research center/field station. Now that we have this place on the map, we’ve recognized that our contribution to conservation in the region can be much bigger. We can now start engaging in terrestrial projects, in ecological monitoring projects, and we can support more visiting researchers, volunteers, and student interns, which means we can have more people out on the water doing more work simultaneously. I think things are going to expand in terms of the reach and the scale of the work that we’re doing in a big way. It’s a very exciting time for us.

Want to travel with Andy next season? Explore all five of our Alaska itineraries, ranging from compact and highly active to voyages that roam farther afield.