What to Expect When Exploring the Russian Far East

Beginning in 2019 the National Geographic Orion will visit the Russian Far East and the Bering Sea. Our Field Correspondent, Jennifer Kingsley, recently returned from 50 days in this remote region. We asked her to share some stories and a preview of what Orion’s guests will discover here, at the edge of the world.

With the support of Lindblad Expeditions, I have spent the last three years traveling to remote Arctic communities all over the world. My passion as a journalist is to listen for personal stories, which I believe contain the soul of a community. In the fall of 2017, I became a National Geographic Explorer and made my most ambitious journey yet: 50 days in Russia’s far eastern corner called Chukotka.

Photographer Eric Guth and I entered Russia from Nome, Alaska in a nine-seater prop plane. The flight only took an hour; it’s hard to believe that two different worlds can be so close together. We soared above the Bering Sea until the mountains of Chukotka began to show through the mist. Then we descended to a Soviet-era airport, surrounded by razor wire, and our journey into beauty, hardship, survival, and unforgettable stories began.

There are some stunning natural areas here. Beringia National Park protects the Russian side of the Bering land bridge, which provided a migration route for Inuit ancestors during the last ice age. However, even this wild landscape hints at the layers of history we would encounter everywhere. This abandoned village site, Avan, was used by Inuit for generations, and heaps of whale bones still outline ancient roofs. Across the spit, you can make out the remains of a Cold War border post, a reminder of another history and a powerful legacy. 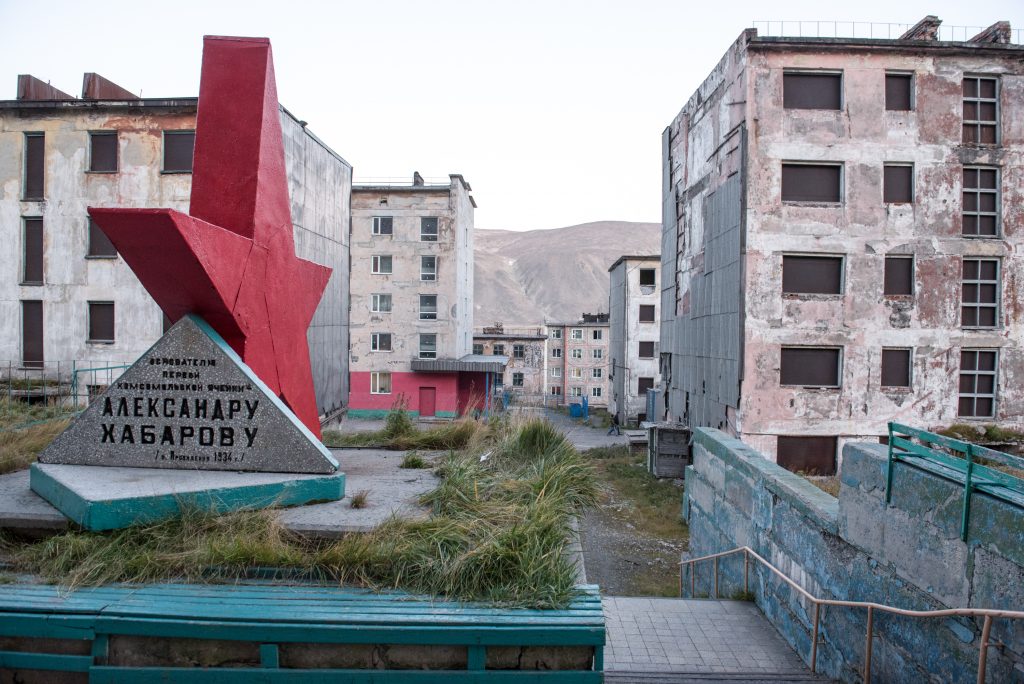 There is no escape from history in Provideniya and that adds to the richness of the area. This town of 2,000 was our first stop, and we both found it beautiful. The texture here mirrors a story of enormous change. More than half of the population left the Far East when the Soviet Union collapsed. Now, some windows are sealed with steel plates, others are overflowing with house plants and flowers. Behind these facades, we found welcome. 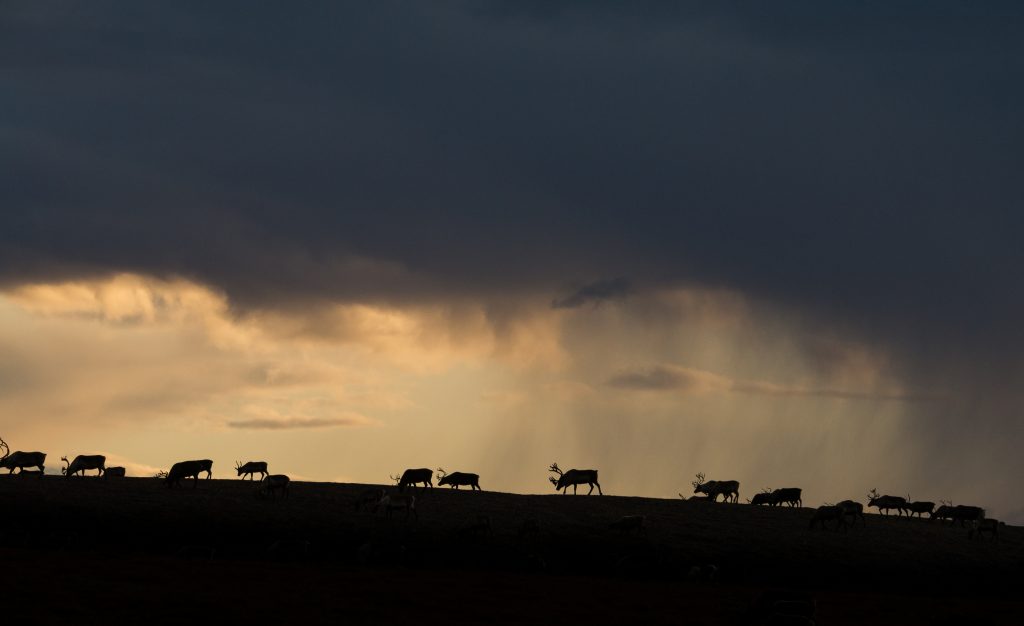 The land in Chukotka is part of the tundra that circles the entire Arctic, so we found many reminders of Canada, Alaska, and Greenland here. We also found both ancient and modern rhythms. In some ways, the place has been transformed by waves of political and economic change, yet it still pulses with the hoofbeats of reindeer and the migration of walrus. The people here live very closely with the land and for many, life revolves around what nature brings with each new season. During our stay, every meal included fresh wild berries. 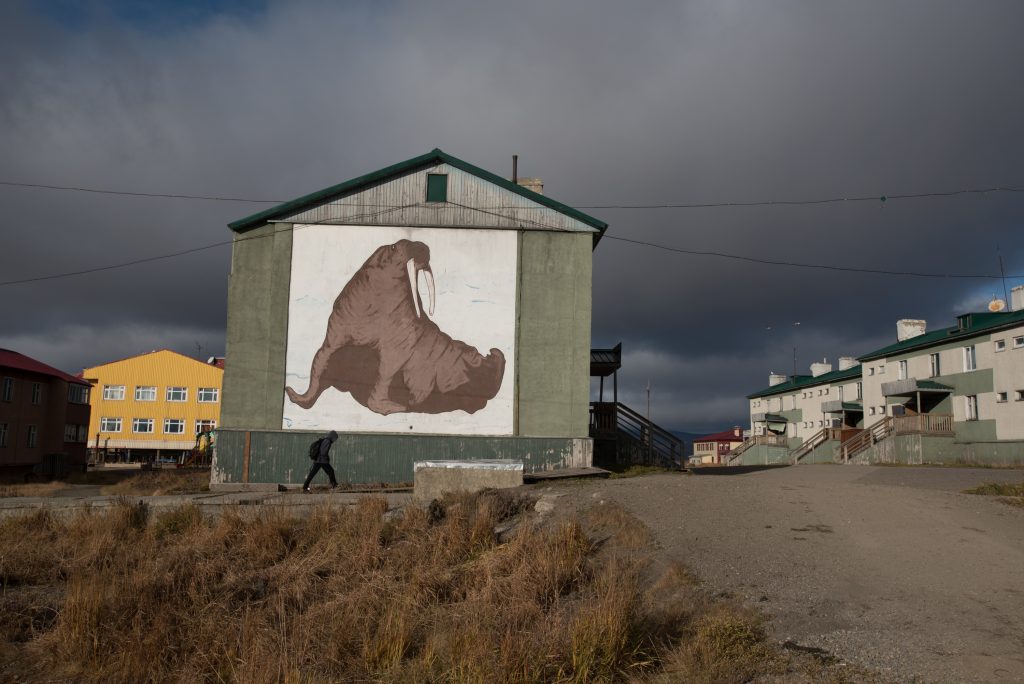 Exploring the Russian Far East also helped me question my ideas of beauty. As a newcomer, there was something unexpected around every street corner, from murals to greenhouses to playgrounds. Lorino is a hunting community which relies heavily on the marine mammal harvest, as is reflected in the street art on this building. This traditional activity takes place in a modern setting, yet there’s no border between communities and the tundra that surrounds them. Berry picking, for example, might happen a few hundred meters from the grocery store.

Listening for the stories that people want to tell steers me away from stereotypes and towards diversity. These people, or anyone else you or I might meet on the road, hold a piece of what makes this remote region so unforgettable.

Elizavete (left) keeps this wooden figure hidden in her apartment. It’s like a mother figure for her Yupik clan, and she speaks with it during difficult times. Zhenya (center) returns to his home village to hunt whales and walrus. When he was a child, the Soviets relocated everyone from this community, but it’s still home. Dancers and musicians from all over Chukotka form the renowned group Ergyron which both preserves old traditions and creates new ones.

Each person I met helped me understand a new dimension to this extraordinary place which calls forward the strength and resilience in each of us. 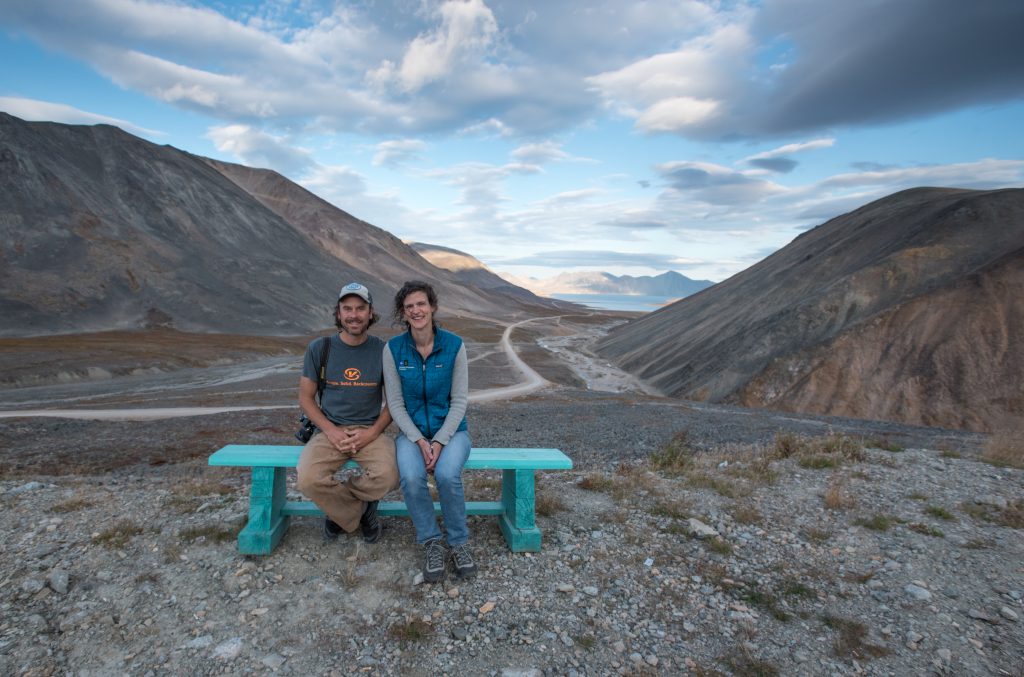 Jennifer Kingsley (above right) is the founder and project lead for Meet the North, a journalism project that builds cultural understanding. Eric Guth (above left) is a photographer and a naturalist/certified photo instructor with Lindblad Expeditions. Learn more about both of them and Meet the North at MeettheNorth.org.

Inspired to join us in the Russian Far East? Explore our three brand-new itineraries:
Across the Bering Sea: From Katmai to Kamchatka
Bering Sea Wilderness: Pribilofs, Katmai, and Kodiak
Exploring Russia’s Far East and Wrangel Island