Edith M. “Jackie” Ronne never intended on visiting Antarctica, but an uncanny chain of events led to her living and working there for over a year, becoming an Antarctic explorer in her own right.

In January 1947, en route to Antarctica, Jackie’s husband Commander Finn Ronne invited her to fly down to Texas to christen his private expedition ship, the Port of Beaumont. Jackie (a childhood nickname she picked up in Girl Scout camp) arrived with a single small suitcase containing (in her words), “a good suit, a good dress, nylon stockings, and high-heeled shoes.”

Unfortunately, while loading the ship for departure, the crane cables failed, dropping and destroying the aircraft that was required for mapping large portions of the Antarctic continent. Unfazed by the accident, Commander Ronne flew back to Washington, D.C. to procure a new airplane while sending his wife ahead to Panama to keep the expedition on schedule.

When he finally joined her there, Commander Ronne convinced Jackie to stay on board the ship, insisting that as a non-native English speaker, he needed her help in managing communications with government and media. At first, she refused, but eventually wrote home that she was considering joining her husband for the duration of the expedition. Before departing Valparaiso, Chile, Jackie received a letter from her aunt, warning her not to go, as Antarctica would “ruin her complexion.”

In her diary, Jackie wrote, “Finn needs me and I am going with him.” She was made the 23rd member of the Ronne Antarctic Research Expedition, serving as the official recorder, historian, and newspaper correspondent. Unbeknownst to the crew, Commander Ronne executed legal documents that should something happen to him, his wife Jackie would take over as expedition leader. Finn felt because she had assisted him in the many plans and preparations for the expedition, she was the best equipped to fulfill the scientific aims of the mission. And so, Jackie became the first woman ever to serve as a working member of an Antarctic expedition, the first woman ever to overwinter in Antarctica, and the first American woman ever to set foot on the Antarctic continent. 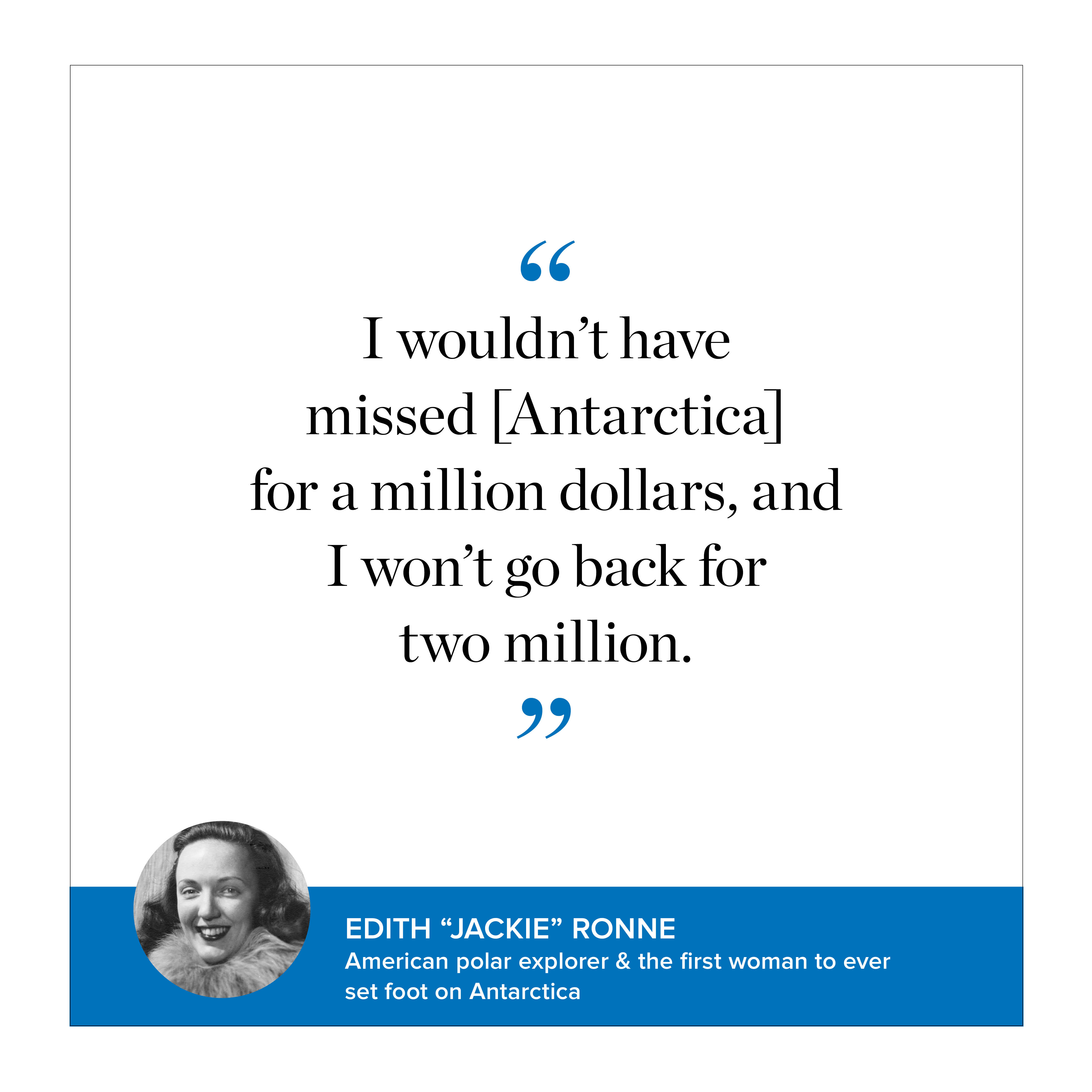 Despite vowing to never return, Jackie made a total of 16 trips to Antarctica, including a trip to the South Pole with Finn in 1971. For the rest of her life, she served as a de facto ambassador of Antarctica, writing and lecturing about the continent and publishing her memoir, First Lady of Antarctica.

From Snowy Setbacks to Pioneering Success

Together, they lived and worked in a 12’ X 12’ hut based on Stonington Island in Marguerite Bay (on the Antarctic Peninsula). She wrote newspaper articles and dispatched official reports several times per week via teletype, while also helping Finn make his flight plans over what remained as the last true terra incognita in the world. Jackie also served as flight crew on several of these missions, and assisted with scientific work across many disciplines, from geology to oceanography.

After 86 landings on unscouted snow, hundreds of flight hours, and 14,000 aerial photographs covering a quarter of a million square miles, the Ronne Expedition managed to map the last uncharted wedge of Antarctica, which Finn christened “Edith Ronne Land.” It was later registered as the Ronne Ice Shelf which is how it is still known today. Their newly updated map confirmed that the Weddell and Ross Seas were not connected, thereby defining the Antarctic landmass as a single continent.

Despite its significant scientific accomplishment, the Ronne Expedition faced several setbacks and difficulties. Crew dynamics were often strained. The three airplanes had to be dug out of the snow constantly. Vicious storms with 100 mph winds trapped crew indoors for days on end. Accidents were frequent: one crewmember walked backwards off a towering ice cliff, crashing through the sea ice, but was miraculously pulled out alive. The team’s physicist fell 100 feet down into a glacial crevasse and stayed suspended upside down, with hands pinned behind his back for 12 hours before being rescued (Commander Ronne said, “It was like pulling a tooth from its socket”). And one Air Force pilot slid on the ice right into the moving propeller of his plane, saved only by his thick fur hat. Afterwards he flew the plane all the way back to the main base where his bleeding head was stitched up.

Returning to a heroes’ welcome in New York Harbor in 1948, Jackie recalled the expedition as, “An extremely difficult experience. I was under enormous tension the entire time.” She went on to muse that, “the most difficult part is being in isolation with the same group over a long period of time. Even the way a man puts on his socks in the morning begins to irritate you.”

Sadly, the true extent of Jackie’s contribution to Antarctic exploration, geography and science may never be fully appreciated. While she earned a few bylines in the New York Times, the majority of her records and findings were published under her husband’s name. Moreover, her accomplishments as an explorer were often overlooked in favor of the novelty of a suburban American woman traveling to such an exotic place. Newspapers of the day framed Jackie’s monumental work with headlines like, “Leader’s Wife Undaunted by Antarctic Rigors” and “Washington Housewife In Antarctica”. Others merely described her as “an attractive former State Department employee” while the New York Times wrote, “Far from being the robust type one might expect to undertake an experience that has driven explorers insane, Mrs. Ronne is young and winsome.”

Yet Jackie’s passion for Antarctica outweighed the challenges of navigating a male-dominated world. She acknowledged that traveling to Antarctica, “Made my life. It opened up vistas and opportunities that I would have never had otherwise . . . Old time explorers were all captivated by the beauty, the isolation, and nature in the raw. Invariably, they all wanted to return in time . . . and so it was with me.”

Jackie Ronne passed away in 2009 and was buried next to her husband in Arlington Cemetery with the epitaph, “Antarctic Pioneer.”

The Inian Islands: Where Alaska’s Wildlife ...