Wild Moments from the Early Days of Special Expeditions

Two of our legendary field staff, Naturalist Tom Ritchie and Expedition Leader Tom O’Brien have been exploring with us since the days of Special Expeditions. They both have storied careers, have traveled the world and they’ve banked multiple lifetimes’ worth of amazing memories. But there are certain moments that to this day are still vividly etched in their minds.

Tom Ritchie recalls an incredible wildlife rescue from his first-ever trip in 1981. 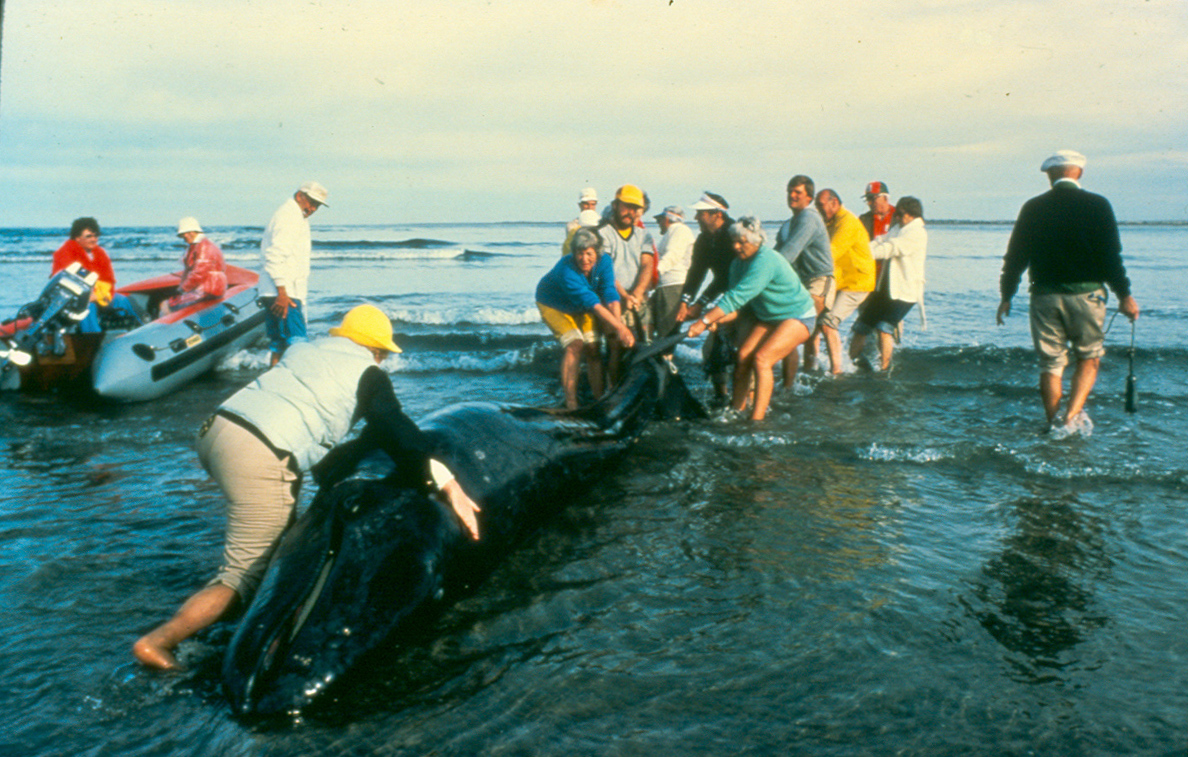 Tom (center in yellow cap) helps tow the whale out to sea along with guests and other staff.

My first trip with Special Expeditions was in 1981 aboard the vessel Pacific Northwest Explorer. We were in Bahia Magdalena on the Pacific side of the Baja Peninsula one morning, and enjoyed several hours in small inflatable boats observing half a dozen adult female gray whales with their babies.

We eventually headed back to the ship for lunch and to make preparations for another location in the afternoon, but on the way I spotted what I thought was a dead baby gray whale washed up on a distant beach. As we all looked at him with binoculars, his tail lifted up weakly as though he used his last bit of energy to signal us. I immediately called Expedition Leader Peter Butz and suggested we try to rescue him. Peter agreed and our flotilla, consisting of four boats and about 30 people made up of both guests and staff, headed over to the stranded baby at full speed. 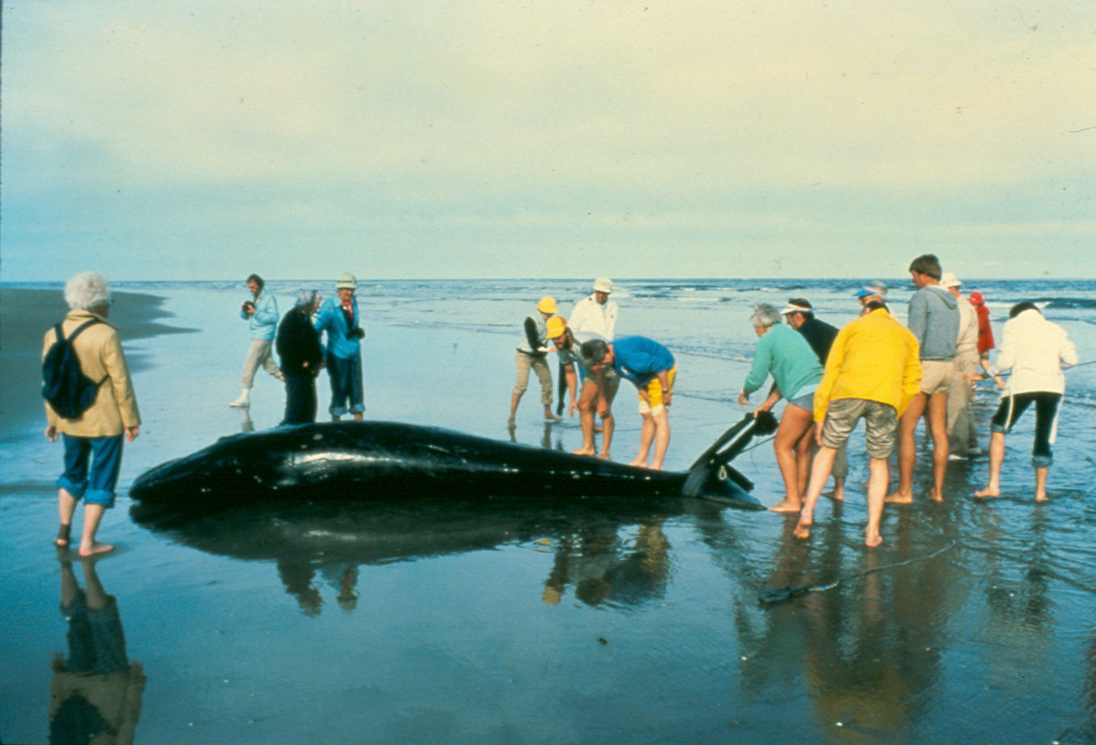 Soon, we were all gathered around the little whale lying helplessly on the beach. It was low tide and would be many hours before the tide came back in, so we had to do something. He would surely soon die if left helpless here on the beach. Since he was way too large for us to pick up and carry, we wrapped a couple towels around his tail stock and attached a long anchor rope to the towels. By pulling on the rope and towels, we slowly dragged him down to the beach and into the water. The water was quite cold, but we all happily plunged in fully clothed to get him into water deep enough to float.  Then, we removed the vests and rope, and faced him into the open water.  Several of us held him steady until he suddenly came alive and started thrashing his tail.  We pushed him off and he immediately swam away from shore, and since there were several adults in the vicinity we believed one of them was his mother.  Everyone was deliriously happy as we gathered on the beach shivering and hugging and crying and slapping each other on the back. It was one of the best things I’ve ever done.

WITNESSING A WAR ZONE IN THE PANAMA CANAL

Tom O’Brien recounts the unbelievable events that unfolded while he was leading an expedition in Panama in 1989. 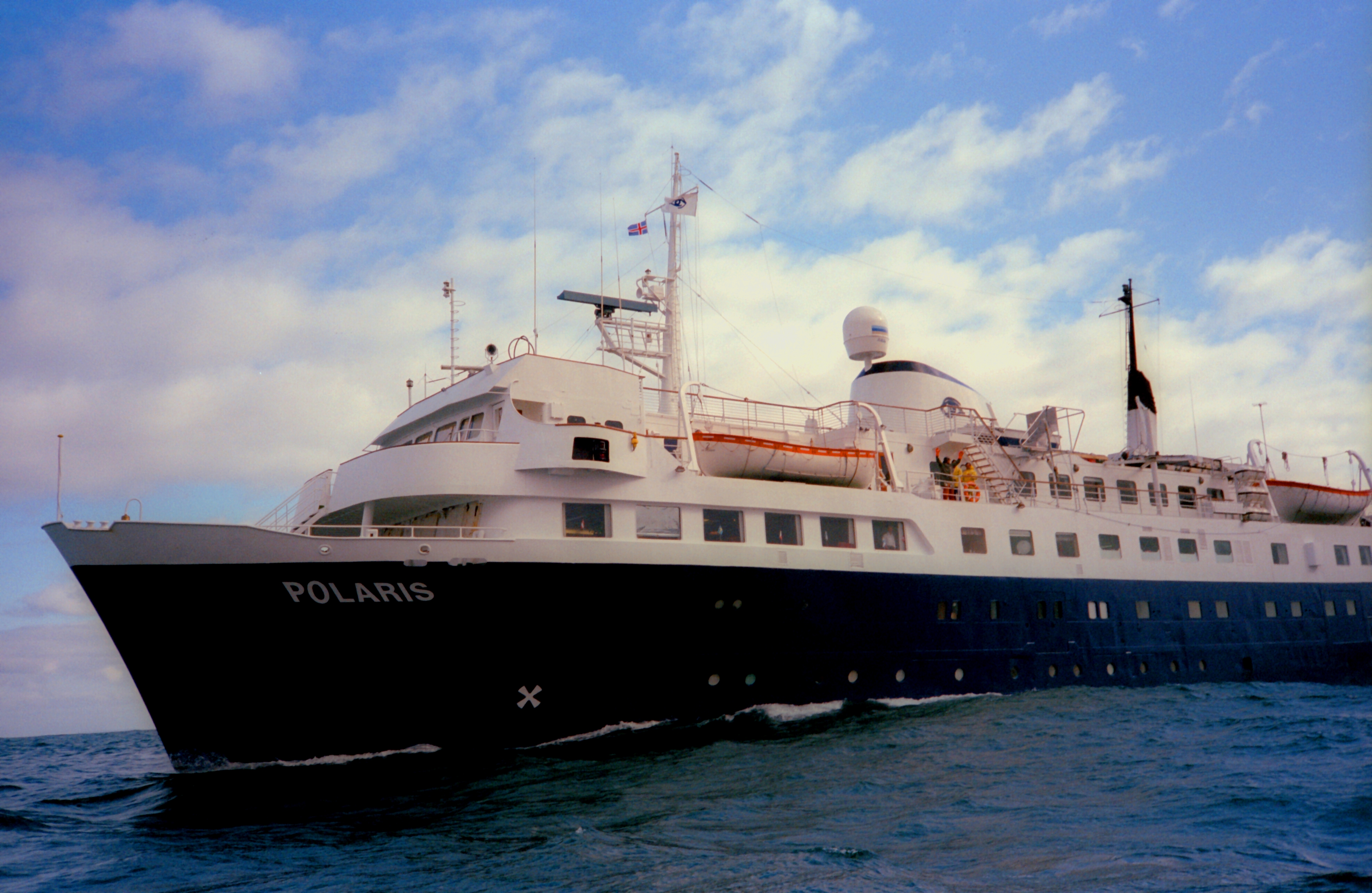 On the morning of December 19, 1989, staff and guests on Special Expeditions’ flagship M.S. Polaris were out on a sunrise Zodiac cruise in the lowland tropical forests and mangroves of the northern Caribbean coast of Panama. We passed an indigenous Kuna paddling a dugout canoe, who approached us with urgency and the excitement of relevance, pointing to the sky while making shooting noises and airplane signs and saying something like “Noriega, U.S.A., bang bang…”

With the Kuna paddler’s gesticulations fresh in our minds, we returned to the ship for breakfast, when the captain told me that we had been contacted by our long-standing shipping agent in the Canal urging us to forego our planned calls in Atlantic Costa Rica for the next days and stand by in front of the pilot station of the Canal entrance in Colon to be ready for any opportunity to transit. Rumors were flying and nobody knew what the status of the Canal would be for the foreseeable future. I explained the situation to all guests and then we waited through a long and uneventful afternoon and evening full of second-guessing, doubt, and a lot of onboard lectures.

The following morning, December 20, 1989 at sunrise, we got a call that we would join a high priority cargo vessel (I think it was an early Liquid Natural Gas carrier) on its priority transit through the Canal. The canal pilot came on board looking nervous and into the Gatun Locks we went. All guests were out on the deck with the tropical air heavy with tension and uncertainty. There was no other ship traffic to be seen. As it happened, our bird-watching Christmas Migration Count naturalist from the National Audubon Society had a hobby of identifying military aircraft, and quickly announced to all of us on deck that we were seeing a major military air build-up with U.S. aircraft that were carrying “lots of bombs.” I remember him pondering, “there is definitely something big going on.”

And so it started. As we transited Gatun Lake and got closer to Panama City, we birdwatchers witnessed Operation Just Cause and the U.S. bombing of Panama. We were soon all instructed to go inside the ship and stay at least 20 feet away from windows, but most of us huddled next to curtains in the dining room or library to watch history in action. A Soviet cargo ship was the only other ship that we saw all day coming the other direction as we watched bombs, flames, and smoke all over Panama City and planes rocketing by above. We felt safe, kind of, and a little bewildered that we were actually transiting during an active war. As expedition leader, I was only giving thanks that we would be able to get the ship into the Pacific Ocean for our next three months of operation.

Unbelievably, when we finally safely exited the Miraflores Locks, a humpback whale breached in front of us as if to welcome us into the Pacific. Our next day’s stop was supposed to be on the Panamanian island of Coiba, but we weren’t allowed to approach because it was being repeatedly strafed by machine-gun firing aircraft in the post-invasion search to find Noriega. Actually we did not set foot on land again until a few days later in the safe waters of Costa Rica, but the ship made it into the right ocean, and those of us on board had another story of a lifetime to tell from our expedition adventures.