6 Fascinating Birds to Find on an Amazon River Expedition

If you’ve ever wondered why people get addicted to bird-watching, a boat trip along the Amazon River should quickly answer that question. Exploring the Amazon’s Pacaya Samiria Natural Reserve has an uncanny way of inspiring travelers who’ve never gone bird-watching before to start scanning the trees and the sky for the most stunning, elusive, eccentric birds—a habit that’s hard to break once the trip is over. Countless varieties of mesmerizing birds thrive in the Pacaya Samiria’s tropical rainforest climate. Here are a few to look out for on your adventure. 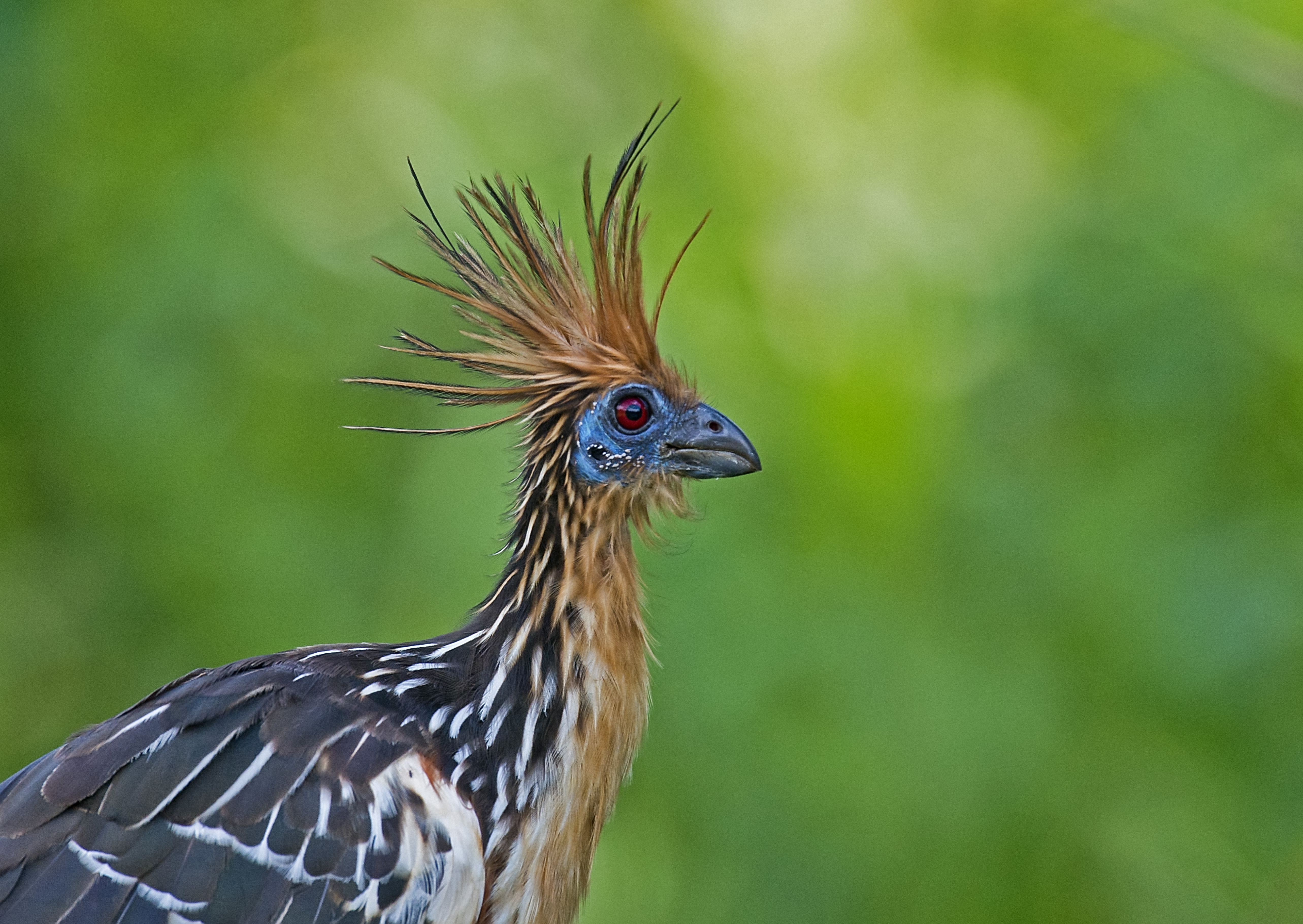 Spotting a hoatzin is one of the most thrilling bird-watching experiences you can have in the Amazon. This blue-faced bird, with its orange crest and its red and black feathers, has a decidedly prehistoric look—and some ornithologists believe it’s related to the archaeopteryx, a dinosaur with bird-like features that dates back 150 million years. Watching hoatzin chicks in action is a surprising sight: The baby birds have winged claws which, unlike the vestigial claws on certain other birds’ wings, actually serve a purpose. They allow babies to crawl back up a tree after they’ve jumped into the water to avoid getting eaten. The clawed wings also help a baby hoatzin walk seemingly on all fours, like a dog, with its winged claws acting as two front legs. 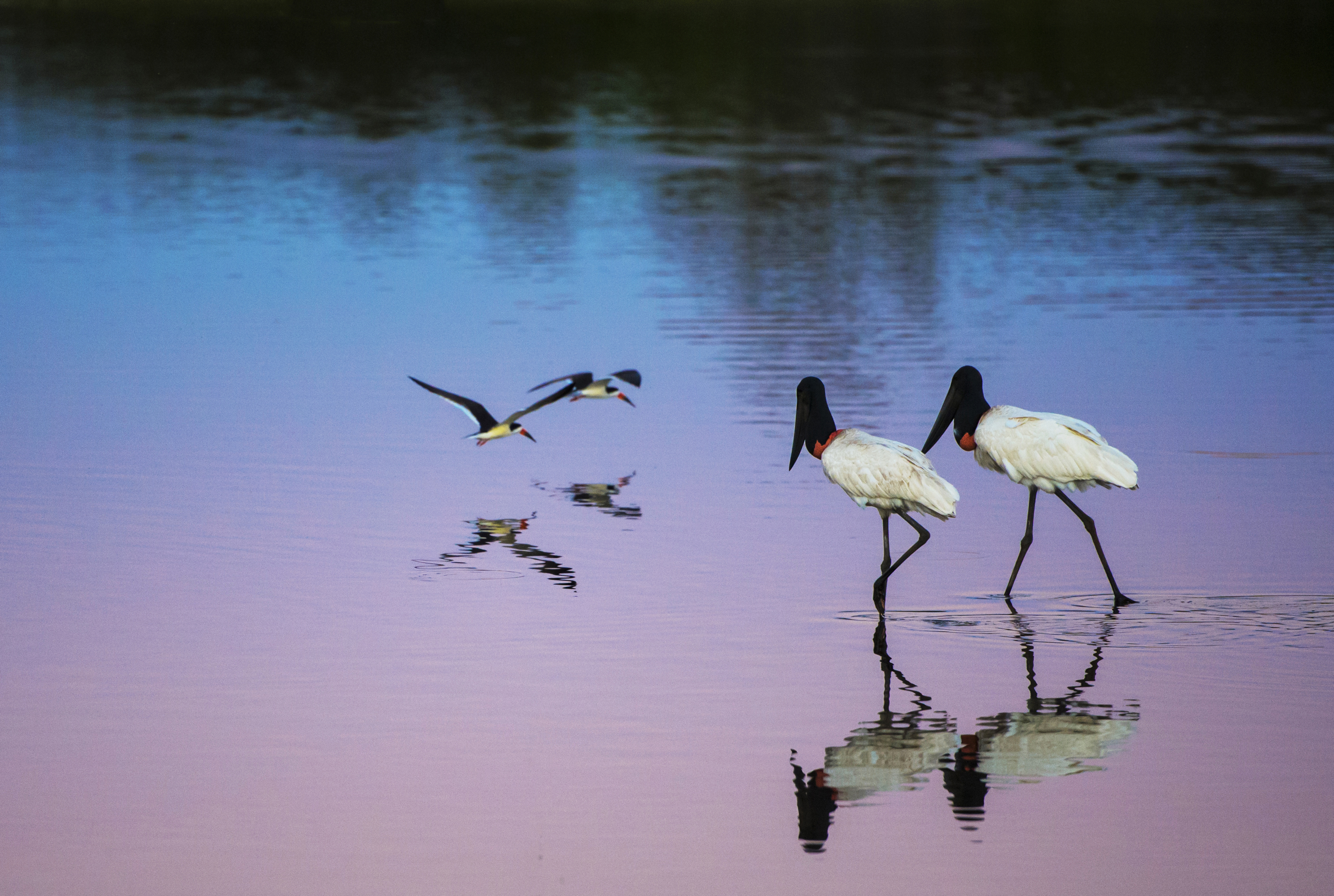 Bend your neck back and look way up, to the highest tree tops in the Pacaya Samiria Reserve, and you might catch a glimpse of a jabiru stork. One of the region’s largest storks—the biggest can tower over the average human—this bird dresses to impress, with its ebony head, snow-white body, and bright red patch around its neck. Make sure to keep an eye out for groups of jabiru storks gathering at freshwater pools, trying to lure fish into their trap. But the best place to spot a jabiru stork is often in its nest: They build gigantic, durable homes that last for years—and can expand until they’re two meters in diameter or beyond. 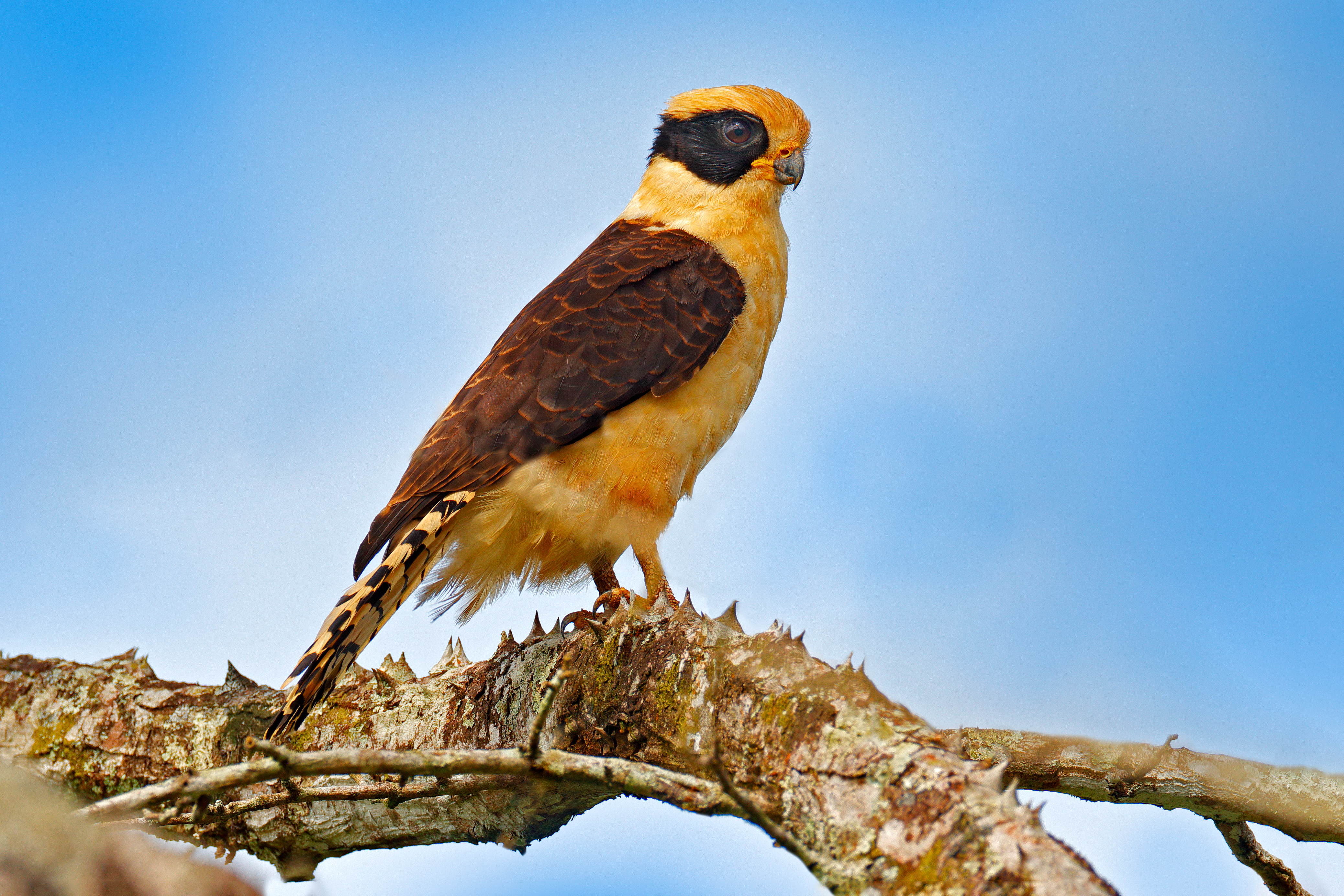 What was that sound? Someone on the boat laughing maniacally? Nope, it was just a laughing falcon. This forest-loving bird, unmistakable with its black mask-like eye patches and fuzzy yellow-white plumage on its head, hangs out in the trees to look out for its favorite meal: snakes lounging in the sun at the edge of the thicket. Although they’re not members of the hawk family, they’re also known as snake hawks, and they attack their slithery prey with enough force to sometimes decapitate them. Their eponymous laugh-like cry usually rings out only in the morning and at sundown, but when it does, it can go on for an eternity—or, well, five whole minutes. 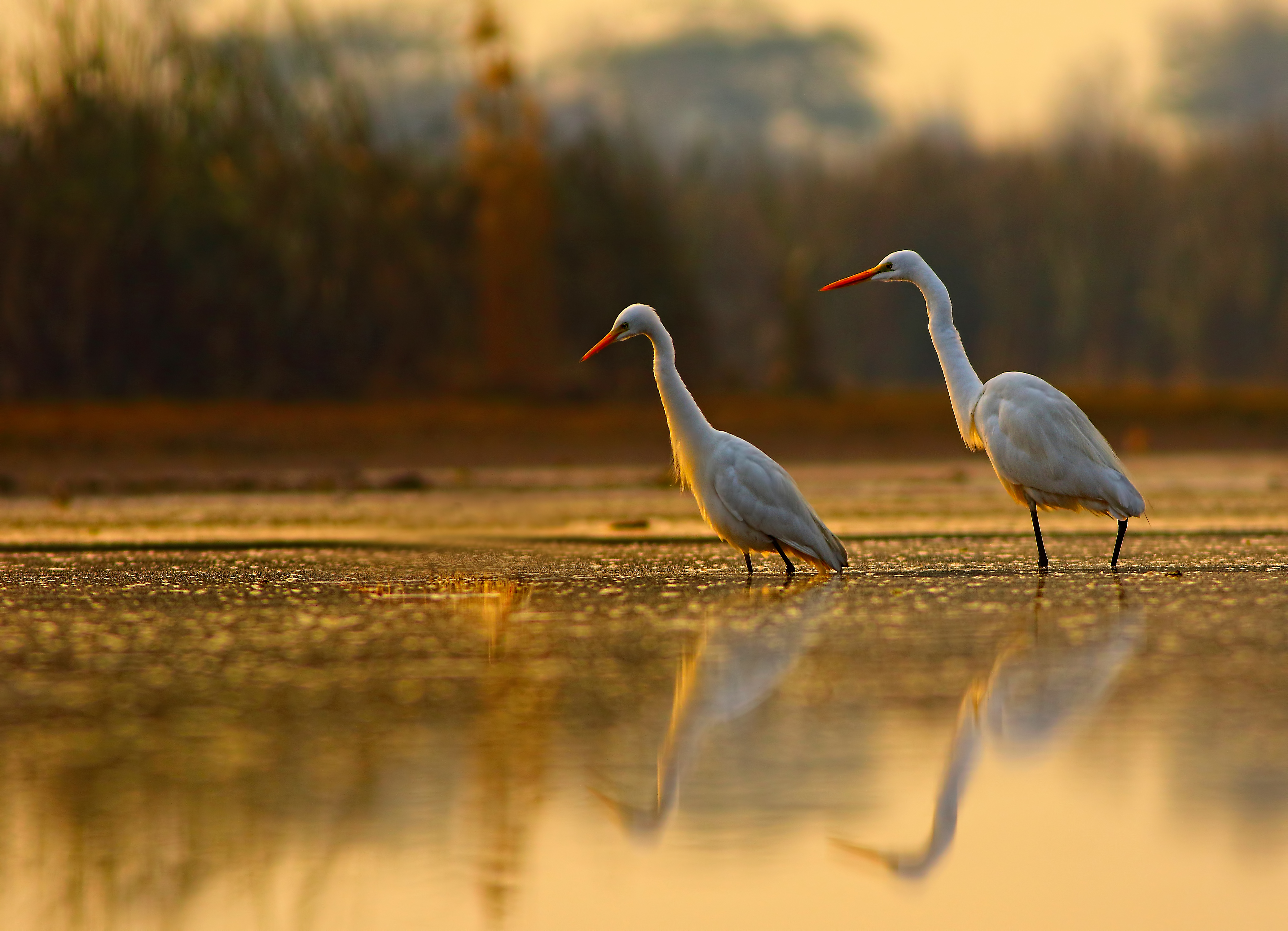 The great egret turns heads everywhere it goes. With a long and curvy neck, an elegantly pointy yellow bill, jet black legs, and crisp white feathers from head to tail, this majestic bird always looks ready for a very formal affair. Spotting a great egret during mating season is a special treat: That’s when the bird fans out the long white feathers (aka aigrettes) on its backside, creating a fireworks-like effect.

As magnificently colorful as birds can get, blue-and-yellow macaws are always a jaw-dropping sight even for avid birders who’ve spotted them before. The macaw announces itself with a piercing scream, often before its orange belly, blue top and green head come into view. These birds mate for life, and during the breeding season the males command even more attention thanks to their gloriously bright plumage. 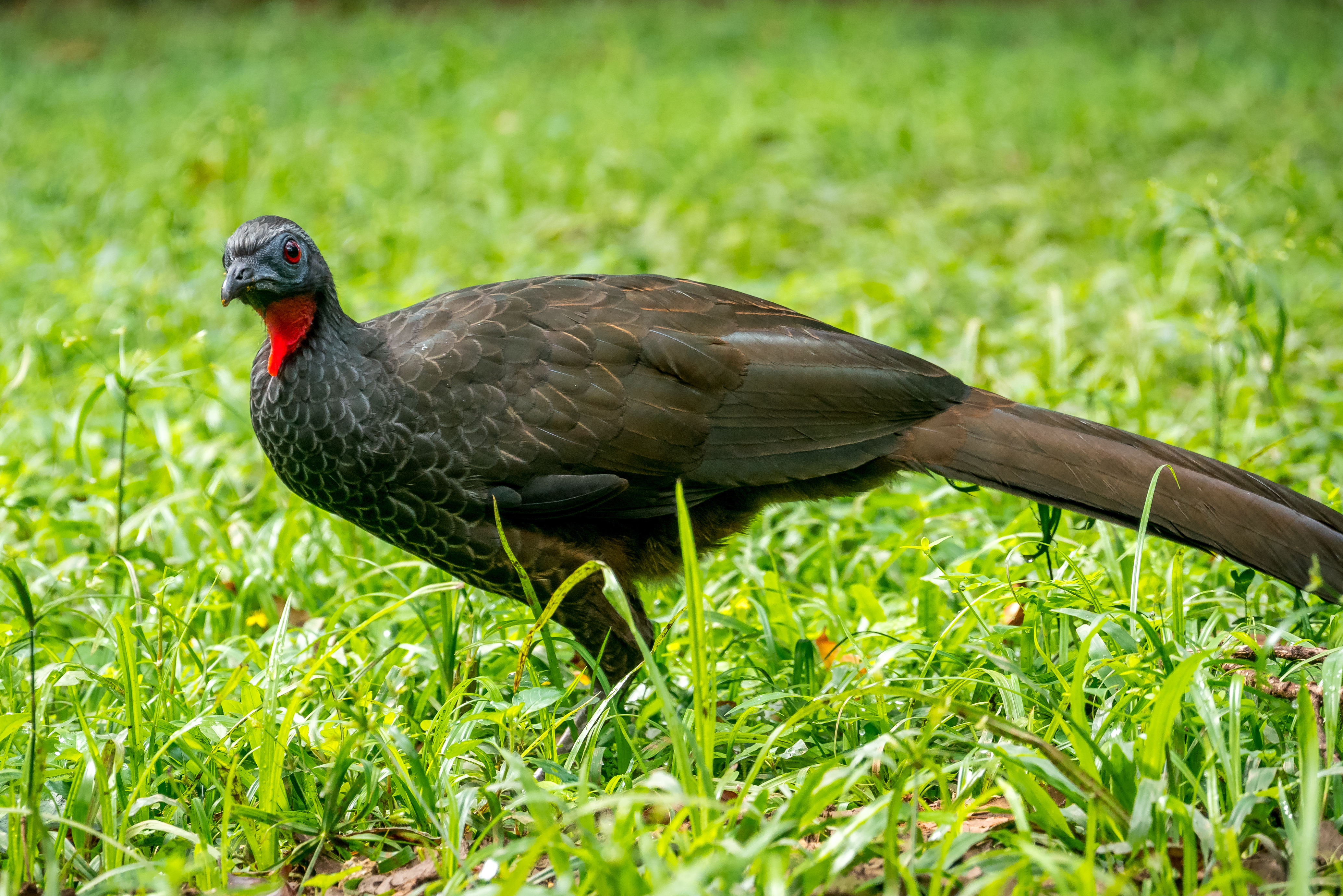 If you hear a loud crashing noise in the forest and look up to spot what appears to be a turkey in a tree, chances are you’ve just seen a Spix’s guan. This big, fruit-loving creature bears an uncanny resemblance to the iconic Thanksgiving bird from some angles, and it has a charmingly clumsy way of getting around, falling through one tree only to land on another. Its distinctive crimson neck stands out from its brown-plumed body, and makes it even easier to spot—if you’re fortunate enough to be in the right place at the right time. 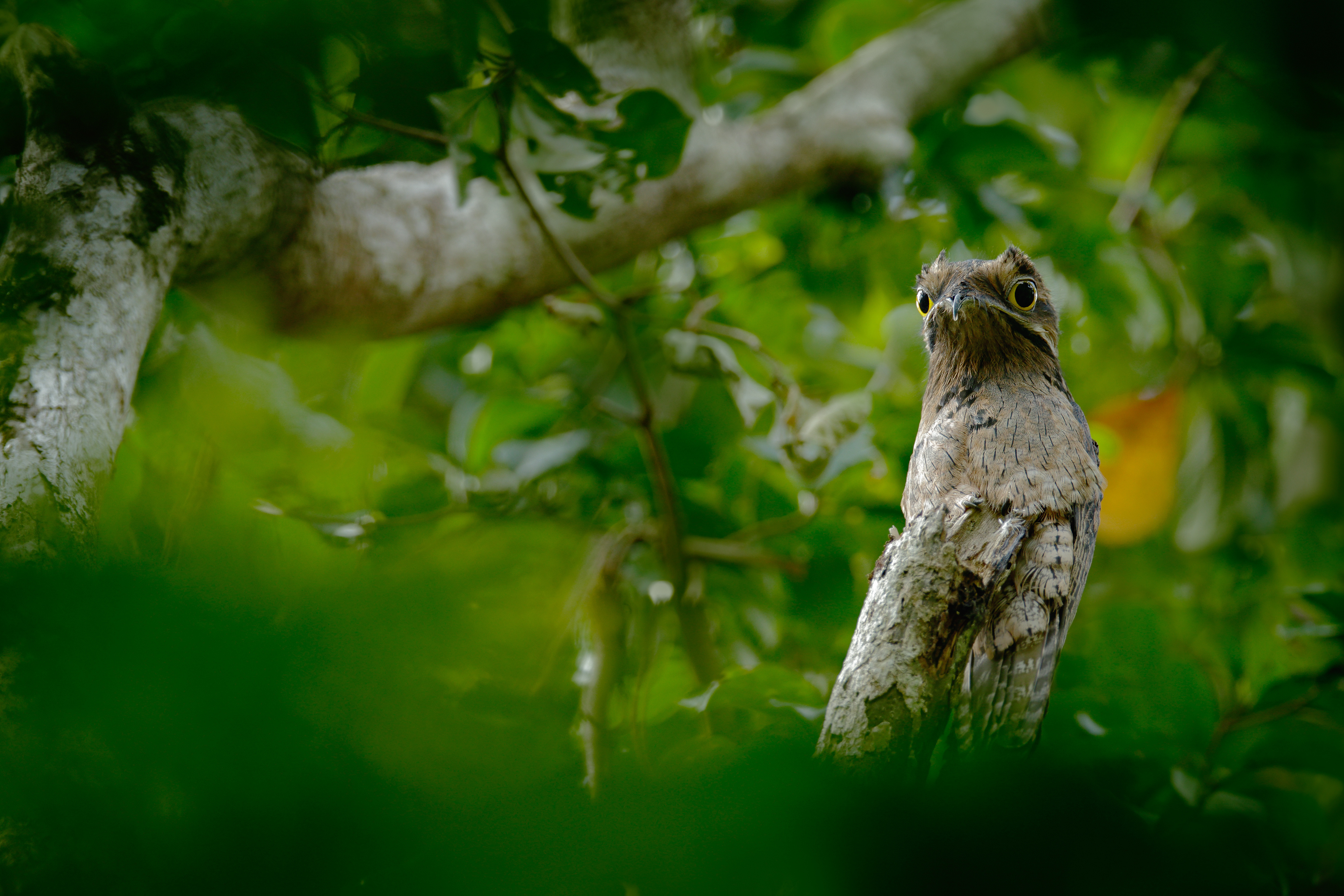 The potoo presents an enticing challenge for bird-watchers: It’s nocturnal, and its superpower is its ability to sit completely still, allowing its bark-colored brown and white plumage to blend seamlessly into the tree branches. Potoos use their impressive camouflage skill to capture their prey of choice: flying insects (the bigger the better) and bats. You might have better luck hearing a potoo before you see one, since its bird call sounds like a long, melancholy growl.

Watch for all these incredible birds plus sloths, monkeys, butterflies, pink river dolphins, and much more on our 10-day Upper Amazon expedition. Board the elegant Delfin II to experience the many wonders hidden in the Pacaya Samiria Natural Reserve.

Plastic Pollution Is Destroying Our Ocean, ...

My Wild Alaska: The Katmai Coast

Teachers in the Wild: Meet the 2019 Grosvenor Fellows