Spending a day under the coconut palms of Guna Yala, off the northeastern Caribbean coast of Panama, is a rare chance to experience a traditional way of life that can also seem decades ahead of its time.

The indigenous Guna people inhabit around four dozen of the 300-plus islands that make up the Guna Yala archipelago, formerly known as San Blas, and live in a vibrant setting that inspires first-time and repeat visitors to reach for their cameras. Although deeply protective of their culture and lifestyle, the Guna are friendly and hospitable, welcoming travelers in an array of richly colorful outfits made from locally handcrafted fabrics called molas. A walk around one of the islands, browsing the craft vendors’ shops and lounging on a secluded beach, can feel like a respite from the busy cities of the Panamanian and Colombian mainland. What’s less apparent is that the islands’ way of life is hard-won. It’s a triumph of the Guna’s struggle for autonomy—they were granted political freedom from Panama after their 1925 revolution—as well as their determination to protect their pristine natural environment from the ravages of development and climate change.

The fact that the Guna Yala islands remain largely unspoiled, a stunningly unbuilt panorama of tropical plants and serene beaches, is a testament to the locals’ efforts to liberate themselves from colonialism and outside interference. For decades, the Guna fended off attempts by real estate developers and foreign investors to build on their land, and as of two decades ago, buyers from outside Guna Yala are no longer allowed to purchase property on the archipelago.

As a result of their autonomy, the Guna have been able to make good on their commitment to safeguarding the thriving greenery, sparkling blue sea water and clean white sands that surround them. Guna Yala contains hundreds of acres of thick forest, and the indigenous farmers are loyal to the local practice of nainu agriculture, planting diverse crops near riverbanks to keep the soil fertile and protect the land from erosion. According to Guna tradition, any extra crops that a family has left over after their seasonal harvest—native produce like plantains, pineapples, yams, sugar cane, and corn—get donated to those in need. 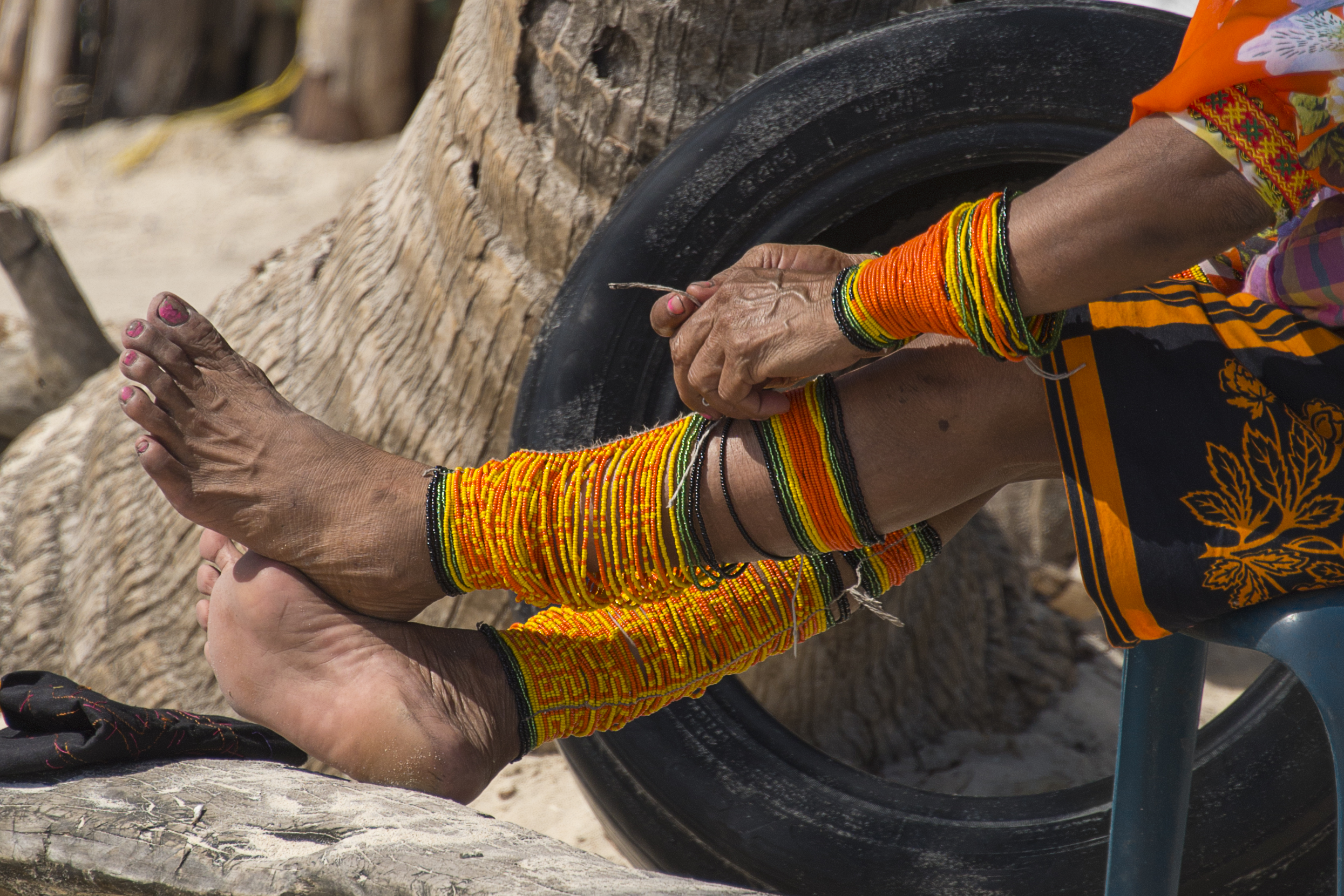 A Guna woman in traditional clothing with mola embroidery and colorful bracelets made of hundreds of small beads.

The Gunas’ self-determination has also meant the freedom to hold onto their ancestral custom of placing women at the center of society.  While men still hold most of the political leadership positions in Guna Yala, women occupy a revered role in the culture as the primary property owners and chief breadwinners. After weddings, the groom typically moves into the bride’s family home, instead of the other way around, and the most important celebrations in the community revolve around the births of girls and other milestones in the lives of women.

Gender fluidity is also a feature of life on the Guna Yala islands, since many locals identify as Omeggid, a “third gender” status in which a person born male chooses to live as a woman. Still mostly marginalized and misunderstood in the rest of the world, this transgender identity has deep roots and a supportive community in the Guna Yala islands. It’s another way in which the Gunas’ traditional lifestyle reflects values often considered forward-thinking or controversial elsewhere.

Even one afternoon spent around the Guna Yala islands can feel like a transportive experience. A few of the islands are dotted with small hotels owned by the indigenous residents, but visitors who pass through just for the day can still soak up the local lifestyle, spending leisurely hours winding through pathways lined with wooden thatched-roof huts or resting in a hammock, a favored piece of furniture around the Guna Yala towns and beaches.

Browsing the craft vendors’ artisanal wares is another way to mingle with locals and support the economy. Many of Guna Yala’s lush green seaside villages sustain themselves by selling those embroidered molas, along with handwoven sombreros called vueltiaos and intricate fabric bracelets. After the trip is over, a textile or accessory might do more than decorate a tabletop or adorn an outfit back home. It can spark memories of a place where the values of protecting nature and the community point the way forward, resonating far beyond the borders of a remote Caribbean island.

Interested in visiting the Guna Yala islands? Join our brand-new itinerary Panama & Colombia: Exploring the Caribbean Coast, and you’ll have the opportunity to wander the archipelago and have unique encounters with the local people.