If you haven’t watched the Netflix documentary My Octopus Teacher (now nominated for an Oscar!), we highly recommend adding it to your list. This moving story chronicles the year-long relationship between a diver and a female octopus—and sheds fascinating light on these complex, enigmatic creatures.

Connecting with the undersea world is a key part of a Lindblad expedition and our undersea team is no stranger to cool encounters with incredible lifeforms. Each summer they dive into the icy waters of Southeast Alaska to explore, and nothing excites them more than coming across one of their favorite cephalopods: the giant Pacific octopus. Here, divers Ashley Knight (@ashsplashley) and Gail Ashton (@gvashton) share some interesting facts about the octopus.

Giant Pacific octopuses really do live up to their name
There is a good reason that Enteroctopus dofleini gets the common name giant Pacific octopus (affectionately known as GPOs). As the largest members of the cephalopod family, they really can grow to be giants, weighing over 100 pounds with arm spans reaching over 26 feet long. That’s a lot of octopus! Among the shallows where we dive in Alaska, we more commonly come across the smaller juveniles which would fit in the palm of your hand.

They are undisputed masters of camouflage
In just three-tenths of a second, GPOs can expertly blend into their environment by changing colors using special skin cells called chromatophores. These cells expand and contract and can even produce different textures—like bumps, ridges and ‘horns’ above an octopus’s eyes—that mimic surrounding surfaces. This is one of the reasons it’s always so exciting to find one on a dive and watch it move over different backgrounds, changing color and texture as it goes. It makes us wonder how many we miss that are just watching us pass by!

They have the biggest brain of any invertebrate
Octopuses use this intelligence not only to change the color and texture of their skin but also to control the sensors in their suckers to touch, taste, and smell their surroundings. As divers, this is probably their most appealing trait—most other organisms swim away or don’t react to your presence, but these curious cephalopods seem to want to interact, watching you, watching them, trying to work out if you’re predator or prey, or maybe a playmate. It is definitely a two-way encounter and it’s one that is always cherished. 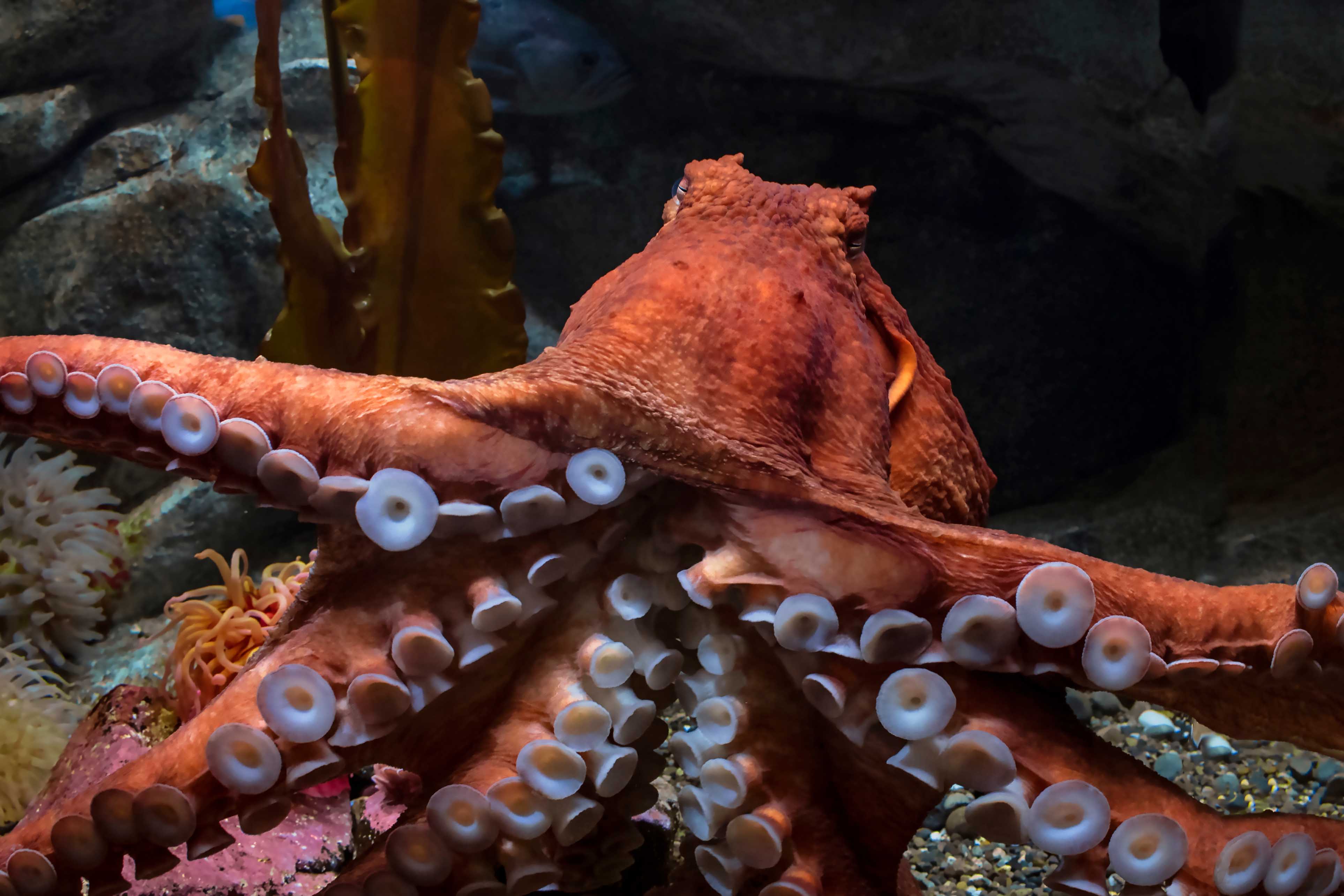 They can perform some amazing feats of strength and agility
Thanks to their muscular, yet supple, boneless bodies and their powerful suckers, GPOs are incredibly strong and nimble. There are over 2,000 suckers spread out across their eight arms, and the larger ones near the center of the body can lift more than 30 pounds. That’s the strength needed to pry open shellfish and crush hard-shelled crab, but it also helps them achieve other tricks they’ve been known to do like opening jars to get at crabby treats or aquarium lids to escape and roam! Those suckers really do act like suction cups by conforming to the shape of the things they touch and contracting the surrounding muscles to create a suction.

Like humans, octopuses sleep in more than one stage
There is still so much to learn about these creatures. Most recently, a research study found that when octopuses sleep, they have two stages akin to human’s REM and deep sleep stages. The octopuses in the study changed color from dark to pale as they switched back and forth between stages. It is exciting to think that they may be dreaming during REM just like us, but just like our pets who seem to be dreaming sometimes, we will never really know unless they could tell us!

Discover our undersea program on a small-ship Alaska expedition this June. Choose from our 8-day Exploring Alaska’s Coastal Wilderness or our 6-day Wild Alaska Escape.

Vaxication Is The Newest Travel Trend: ...