It’s a penguin party down in the ice! Eight of the world’s 17 penguin species live in Antarctica and the subantarctic islands of the Falklands and South Georgia. But can you tell a gentoo from a chinstrap? This penguin primer will get you up to speed so you can know before you go.

Anyone who has seen March of the Penguins knows these emblematic penguins endure unimaginable obstacles to keep the species going. Unlike all other penguins, which nest on land, emperors make their colonies on the sea ice likely never once stepping foot on land. Males incubate the egg on the tops of their feet with a special brood pouch while their mates head off on the arduous journey to reach the ocean and feed. If all goes well, the females return with fish stores just as the eggs are hatching and fuzzy baby penguins are ready for a hearty meal. Males lose almost half their body weight while incubating the eggs so as soon as mom returns they’re off to the ocean to take their turn. These incredible swimmers dive deeper and longer than any other bird, up to 700 feet, and can stay underwater for 18 minutes as they hunt crustaceans, squid, and fish.

Sighting an emperor penguin on an Antarctic expedition is one of the most thrilling events. Standing at nearly four feet tall and weighing up to 99 pounds, the largest of all penguin species is usually encountered alone or in very small groups on sea ice. While emperor penguins are closely related to king penguins and have a somewhat similar appearance, it’s much more massive for its size than the king. Look for that iconic penguin tuxedo and broad yellow patches on each side of the head.

ADÉLIE PENGUIN (Pygoscelis adéliae)
Where to spot: Near the tip of the Antarctic Peninsula to the islands and mainland in the Ross Sea

This is the species most people think of when they envision a typical penguin—that classic little man in a tuxedo. Adélies are entirely black and white with a distinct white ring around the eye and no bright colorful markings. They are one of three species of brush-tailed (or pygoscelis) penguins along with the gentoo and the chinstrap, and as the name implies their tails have very stiff feathers which stick out like a brush. Adélies in particular have a relatively long tail compared to most other species.

During breeding season, huge colonies commonly form with sometimes hundreds of thousands of individuals. Both courting and breeding are brief—it’s one of the shortest of all other penguins—with a lot of flipper-waving and calls. Males also present females with pebbles as a token of affection. Their molting period, which occurs at the end of the breeding season, is as swift as the mating period. Colonies can evacuate and disappear seemingly overnight. 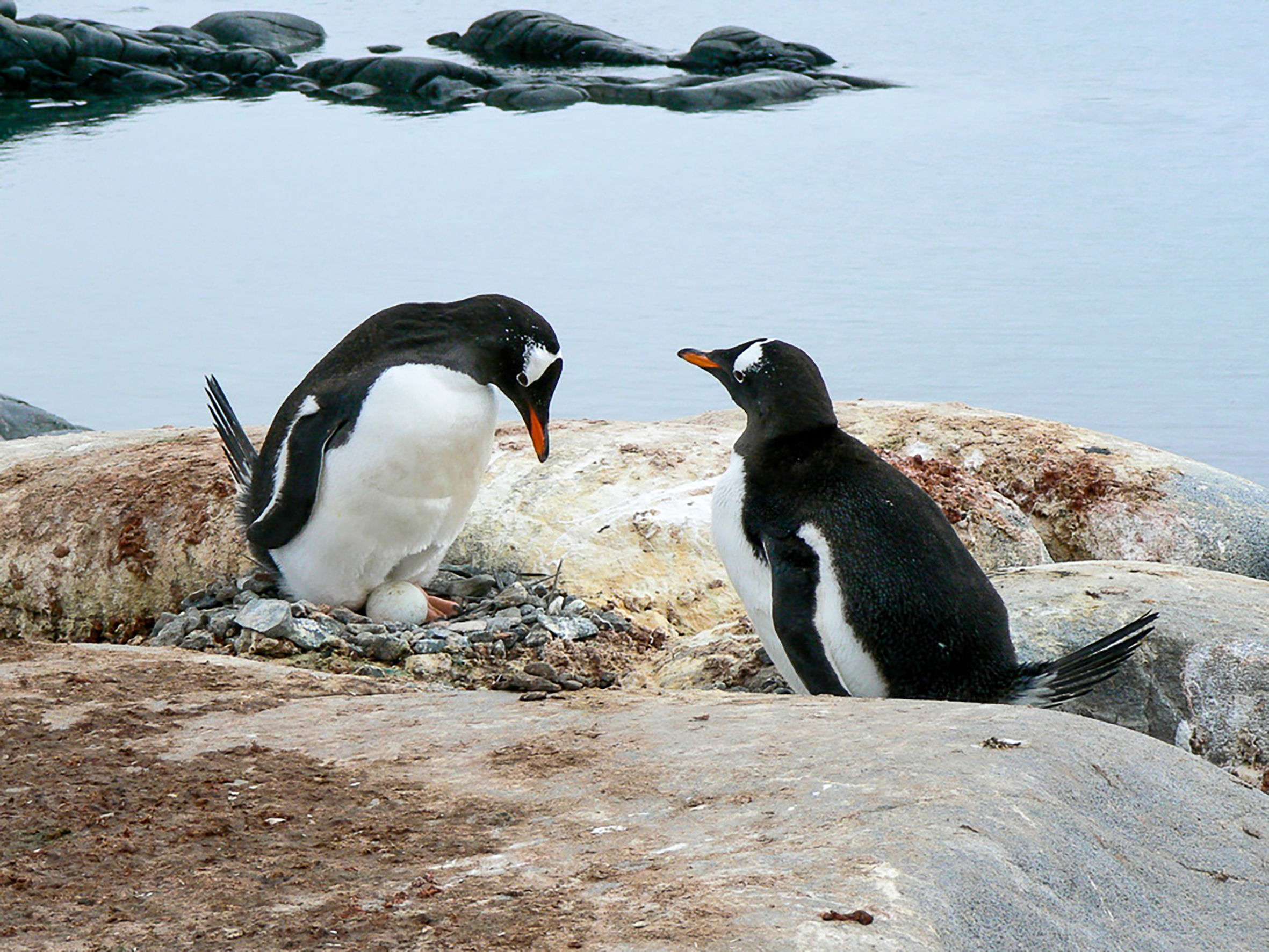 Although gentoos are the least common species on the Peninsula (and the second most scarce penguins of all with just 300,000 breeding pairs), their colonies are usually established in places that are easily accessible for Antarctic visitors. And they are just as easy to identify, even from a good distance, thanks to the white triangular patch above each eye and brilliant orange-red “lipstick” markings on their beak. Plus, there’s that 6-inch long prominent brush-tail.

You’ll also find these birds on many subantarctic islands and they seem equally happy nesting among exposed rocky outcrops in the snow as they are on a pebbly beach or grass tussocks. Gentoos build their nests with stones and males often woo females with carefully chosen pebbles they offer up as gifts. A very fun behavior to catch in person. All that flirting must do the trick because gentoo parents often form long-lasting bonds and are very nurturing once baby arrives.

Watching gentoo antics on land is exciting but try to spot them in the water where you’ll see them truly shine. These guys can swim up to 22 miles per hour—faster than any other diving bird—and dive to depths of 655 feet.

CHINSTRAP PENGUIN (Pygoscelis Antarctica)
Where to spot: This abundant species is found all over Antarctica and the subantarctic islands

The third member of the brush-tails, chinstraps look similar to the Adélies in both markings and size except for that narrow black band (or strap) under the head which makes it look like it’s wearing a little black helmet. With roughly 7 million pairs in the world, this is one of the most abundant species so chances are you’ll see a whole lot of them when you make landfall. And also like Adélies, the chinstraps tend to form huge colonies numbering in the hundreds of thousands or more.

Mates give an incredible performance, aptly named the ecstatic display, when they are courting or exchanging places at their nests. They’re very social birds in general and have multiple forms of communication from bowing and preening to flipper and head waving and gesturing. But they’re also one of the most aggressive species of penguins and can get into some very heated showdowns over nesting space. KING PENGUIN (Aptenodytes patagonica)
Where to spot: Only on subantarctic islands. St. Andrews Bay on South Georgia has a significant rookery

Nothing can quite prepare you for the soul-stirring experience of coming ashore on South Georgia and seeing tens of thousands of stately king penguins all on a single beach. The most striking and brightly colored of the penguins, kings are second in size to the emperor and sport a beautiful yellow-orange throat patch, an orange, inverted teardrop-shaped marking on either side of their black heads, and long, curved elegant beaks. Since they form breeding colonies on subantarctic islands and not sea ice, king penguins can spread their breeding season over a much longer time, between 14 and 16 months. They also spend a much longer time raising and caring for their chicks.

Like emperors, kings do not build nests but incubate their egg on their feet, keeping it warm under a feathery fold of skin. Both parents take turns incubating for periods of 1 to 2 ½ weeks while the other goes off to hunt. Chicks have fluffy brown plumage until about a year old when they acquire their adult feathers and coloring. They look so different from their parents that juveniles were once thought to be a different species. And sailors christened them ‘oakum boys. The brown plumage reminded them of the color of oakum used to caulk timbers on sailing ships.

Rockhoppers are one of the most fun penguins to watch as they hop among rocks and boulders, sometimes stumbling or even tumbling down. Standing less than 24 inches, rockhoppers are the smallest of the Southern Ocean penguins which adds to their cute allure. The distinct yellow plumes above their red eyes are also very endearing. These penguins are part of the crested group along with macaroni penguins (and several other species located in other regions) and they’re the most elaborately adorned of all penguins.

The rockhopper penguin typically nests on steep, rocky shorelines with direct access to the sea, although these preferred sites often involve a lengthy, difficult climb to reach. But this species is tenacious and patiently hop back and forth. You’ll often find their colonies nearby or mixed in with nesting albatrosses, another fascinating bird to observe.

MACARONI PENGUIN (Eudyptes chrysolophus)
Where to spot: Close to the Antarctic Convergence Zone and subantarctic islands including Falklands, South Georgia and South Sandwich

Another crested penguin, the macaroni is so named because it brought to mind the English dandies of the 17th century who strutted around London in gaudily plumed hats and outrageous costumes. This scrappy little penguin looks very close to a rockhopper but its crest is gold in color and considerably thicker. Not only are macaronis the most common penguin in Antarctica, they are the most numerous species of all penguins with an estimated nine million pairs. However, since it typically nests along steep, rocky shorelines on isolated, storm-tossed islands it does make encounters with them much harder. Good news is individual pairs have an unusual habit of nesting within the colonies of other species, so it is likely a few will be sighted.

Ferdinand Magellan, the famed Portuguese explorer, lends his name to these skittish penguins which his crew came across on their attempt to circumnavigate the world in 1520. Another more classic looking penguin they are all black and white, except for a small but noticeable region of pink flesh on the face that flushes red as they get excited or try to cool off on land. They also shed beak feathers, pant and stretch their flippers to catch a breeze and release excess heat. Additional distinguishing traits include two black bands that run across the top part of their white bellies and a stretch of white feathers swooping down from each eye and around the neck.

Unlike any of the other species listed here Magellanics nest underground in burrows. They typically mate for life and return year after year to the same nesting site from which they hatched. Once chicks reach a suitable size they vacate their little homes and (like most other juvenile penguins) form dense creches for protection near the closest beach.

Browse all six of our Southern Ocean itineraries which will bring you up close to these majestic birds.

Smart Fun in Magdalena Bay with ...