The Indelible Mark of the Marquesas Islands

Tattoos are so ubiquitous these days, it’s often easy to overlook them. But there’s one place in the world where the tattoos are so distinctive and artful, they stand out from the inking seen anywhere else on the planet. That place is the Marquesas, an incredibly remote and enigmatic island group in French Polynesia.

The History of Marquesas Tattooing

Body art in the volcanic Marquesas dates back to at least the late 1500s, and sailors traveling to the islands over the centuries have helped spread the popularity of tattoos worldwide. But in the Marquesas, tattoos go beyond ornamental gestures, communicating a specific societal status, paying tribute to legendary heroes or sacred locations, and signifying the offer of protection or fertility. It’s typical for Marquesan body art to cover the face or head and stretch all the way down to the feet, in elaborate designs made up of meaningful spirals, bullseyes, crossed lines, geometric shapes, animals, and thick bands of ink alternating with decorative borders. But while the islands’ tattoos come in all kinds of styles and have spawned copy-cat art elsewhere, the Marquesas tradition stands out for its immensely intricate patterns and darkly shaded designs that can take a lifetime to complete. 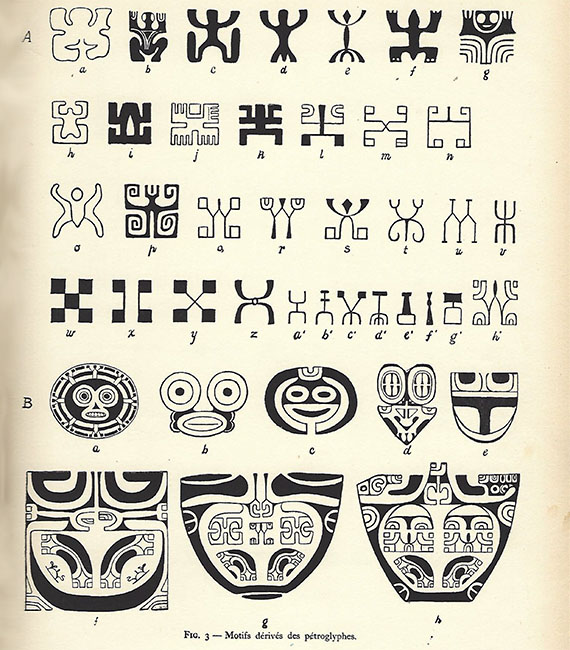 A page from Willowdean Chatterson Handy’s influential book showing Marquesan body art motifs. Today it is widely recognized as a primary source and a key piece of documentation of one of the most important dimensions of Polynesian life.

Around the islands, getting a specific kind of tattoo often depended on the role the wearer plays in the local society. For example, warriors might wear spiral shapes around their eyes and chiefs might get spirals on their cheeks or thighs. Women traditionally received tattoos on their right hands by puberty, to signal they were ready to prepare certain foods and to apply coconut oil to the bodies of the deceased. Members of certain tribal communities often chose their own distinct patterns. As extensive tattooing can be long, painful and costly, the inking might signal courage, endurance, wealth or even age, since locals would typically add to their tattoos throughout their lives.

Getting a tattoo in the traditional Marquesas culture wasn’t just a matter of making an appointment with an artist and laying still for a few hours. The elaborate, weeks-long or even months-long ritual of receiving that first set of tattoos often involved the entire community. In wealthy families, the firstborn son (opou) began at adolescence, kicking off an expensive process that started with building a special house on the family’s property for the tattoo artists to live and work in, and cooking for them during their entire stay.

Mixing the pigment meant heating up ama nuts to open up their shells, then cooking the kernels on stones over a fire to make soot and drying the soot-stained stones on banana leaves. The dried soot combined with water, coconut oil or vegetable juice makes a permanent ink. Artists traditionally painted the tattoos onto the skin using tools made from the bones of animals native to the Marquesas. They chose a different tip for each line or shape to create the detailed designs.

Over the centuries, the body art traditions impressed travelers to the Marquesas, including Moby Dick author Herman Melville, who lived on Nuku Hiva for a month in the mid-19th century and based his novel Typee on his time there. But colonial intrusions in that era threatened to erase the local culture of the Marquesas, and a ban on tattooing by French authorities in 1884 sent the practice into hiding in many island communities, nearly bringing it to a halt.

By the early 1920s, when Hawaii’s Bishop Museum sent scholars to the island to document the dying traditions, expedition member Willowdean Chatterson Handy reported finding only about 125 locals wearing body art, and only one tattoo artist. An impeccable draftsman, Willowdean was tasked with documenting their adornments and she painstakingly copied every motif she could find during her 9-month stay. Her observations and drawings resulted in the influential 1921-22 study, “Tattooing in the Marquesas.”

In the 1980s, when the art of Polynesian tattoo began its dramatic revival, pages from Willowdean’s book could be found circulating among tattoo artists in French Polynesia. Although the ink is now often applied using machines, the body art of the Marquesas has made a welcome comeback and remains a sacred way to connect past with present and to proudly display one’s identity and individuality. Travelers exploring the islands can experience the gorgeous natural environment of sharp-peaked mountains, green valleys, limestone caves and bright blue ocean that inspired much of the body art. For lucky visitors to the Marquesas, a trip will also offer a glimpse of the local residents wearing spectacular, modern-day examples of this centuries-old, one-of-a-kind art.