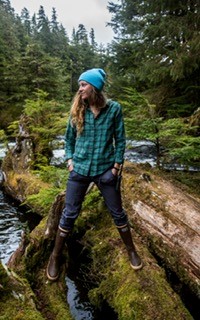 Watching Alyssa Adler nowadays, whether she’s gracefully drift snorkeling through a pass in Polynesia or emerging from a dive in frigid polar waters, it’s hard to believe she once wasn’t the greatest swimmer.  “As a child I wasn’t very comfortable in the water,” she recalls. “But when I started diving in college a whole other world opened up, showing me how powerful it can be to conquer fear.”

After graduating with a degree in marine biology, Alyssa continued to push herself out of her comfort zone traveling the world and developing her diving skills in Greece’s Ionian Sea, the Caribbean waters of Honduras and Bonaire, and the Galápagos Islands. She also spent time as an AAUS Scientific Diver on an offshore reef ecology project, participated in several of NOAA’s reef survey missions, and has acted as lead scientist on long-line shark capture and tagging trips.

Today, Alyssa is the definition of fearless! Since working as an undersea specialist for Lindblad she has added extreme cold-water diving to her list of achievements. Now, a typical afternoon for her means coming face-to-face with apex predators like leopard seals and powering through the bone-chilling plunge into icy waters. With her camera in tow Alyssa surveys the seas looking for unexpected species to present to guests back aboard ship. “More often than not, my favorite animal encounters are with individuals so small that most people wouldn’t give them a second glance,” she explains. By highlighting these lesser-known organisms, Alyssa hopes to inspire a fresh perspective and create a deeper understanding of the ocean and its inhabitants.

Cold water wakes up Alyssa’s creative soul in a completely different way than the tropics, which is why she chose the remote and challenging Inian Islands of Southeast Alaska as the focus of the National Geographic Early Career Grant she received last August. Her last year has involved extensive underwater documentation, observation, and data collection along select regional bull kelp forests, all which will be used to tell the story of Nereocystis, an annual kelp that thrives in this ecosystem.

Alyssa has the true spirit of an explorer and the innate passion of an educator and advocate. With a disarming and easygoing manner, she effortlessly shares her love of the natural world and her desire for true ocean conservation with everyone who is lucky enough to spend time in her orbit.

I explore because nothing makes me feel more alive, alert, or capable than using my foundation of experience to push the boundaries of what I know out there in the field. Especially as a polar diver with Lindblad, I can venture to places people have never been and see parts of the underwater world which have actually never been seen by human eyes, and that concept is thrilling.

What is your favorite Lindblad destination?

Southern Argentina and the coast of British Columbia.

I’ve always dreamt of exploring Russia’s Kamchatka Peninsula. I haven’t been yet, but will be working on a Lindblad voyage to this destination in July!

You can go anywhere you want, do anything you want. No dream is too grand as long as you can design the correct path, and then take many small steps to reach your ultimate goal.

Reunite & Reconnect—Gather Family or Friends & Save