I recently returned from my second expedition as a Global Perspectives Guest Speaker for Lindblad Expeditions-National Geographic. It was my fourth trip to Antarctica, but my first to South Georgia and the Falkland Islands. Ever since my initial visit to the White Continent in 2009, I’ve said it’s my favorite place on Earth. But in the weeks leading up to this voyage, several well-traveled friends insisted South Georgia would become my new favorite. 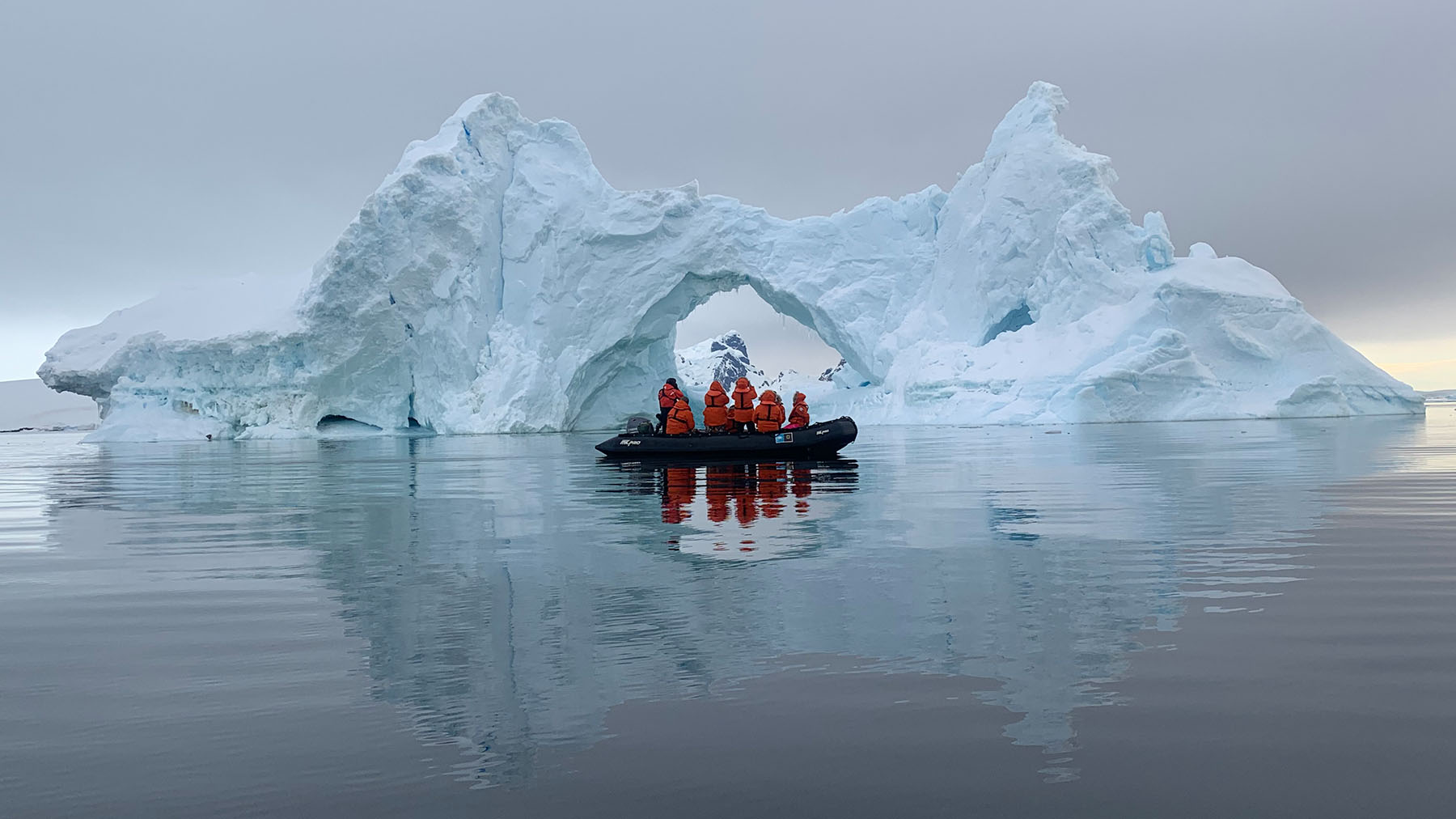 Both places are spectacular and breathtaking but in very different ways. Antarctica has an indescribable expansiveness and pristine beauty—a deep sense of peace is pervasive. I feel like I can really breathe in Antarctica, in a way that I can’t breathe anywhere else in the world. South Georgia, on the other hand, is unexpectedly wild and primal, epic in its own way. 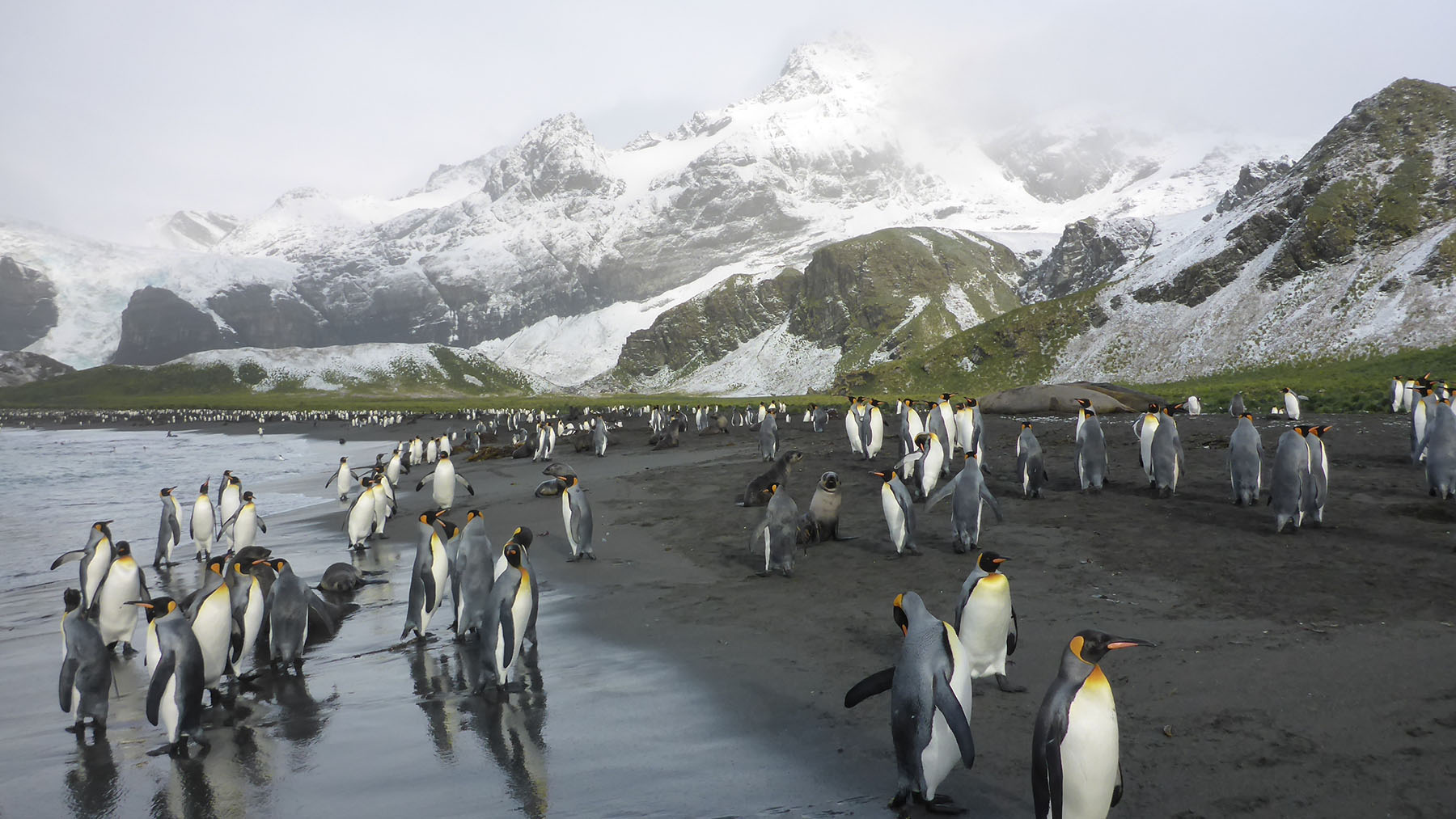 Our 21 days at sea were filled with numerous firsts—even for many of the National Geographic Explorer staff and crew. On day 7, we witnessed the largest gathering of fin whales that anyone—including the captain and all the naturalists—had ever seen! We were surrounded by about 75 to 100 individuals. No matter where you looked, the ocean surface was dotted with whale blows. On day 10, we saw a few blue whales—including a small calf—relaxing at the surface. I had always hoped, but never actually thought, that I’d see the world’s largest whale. Being in the presence of these magnificent creatures was truly thrilling, and I was surprised to see how blue they really are! 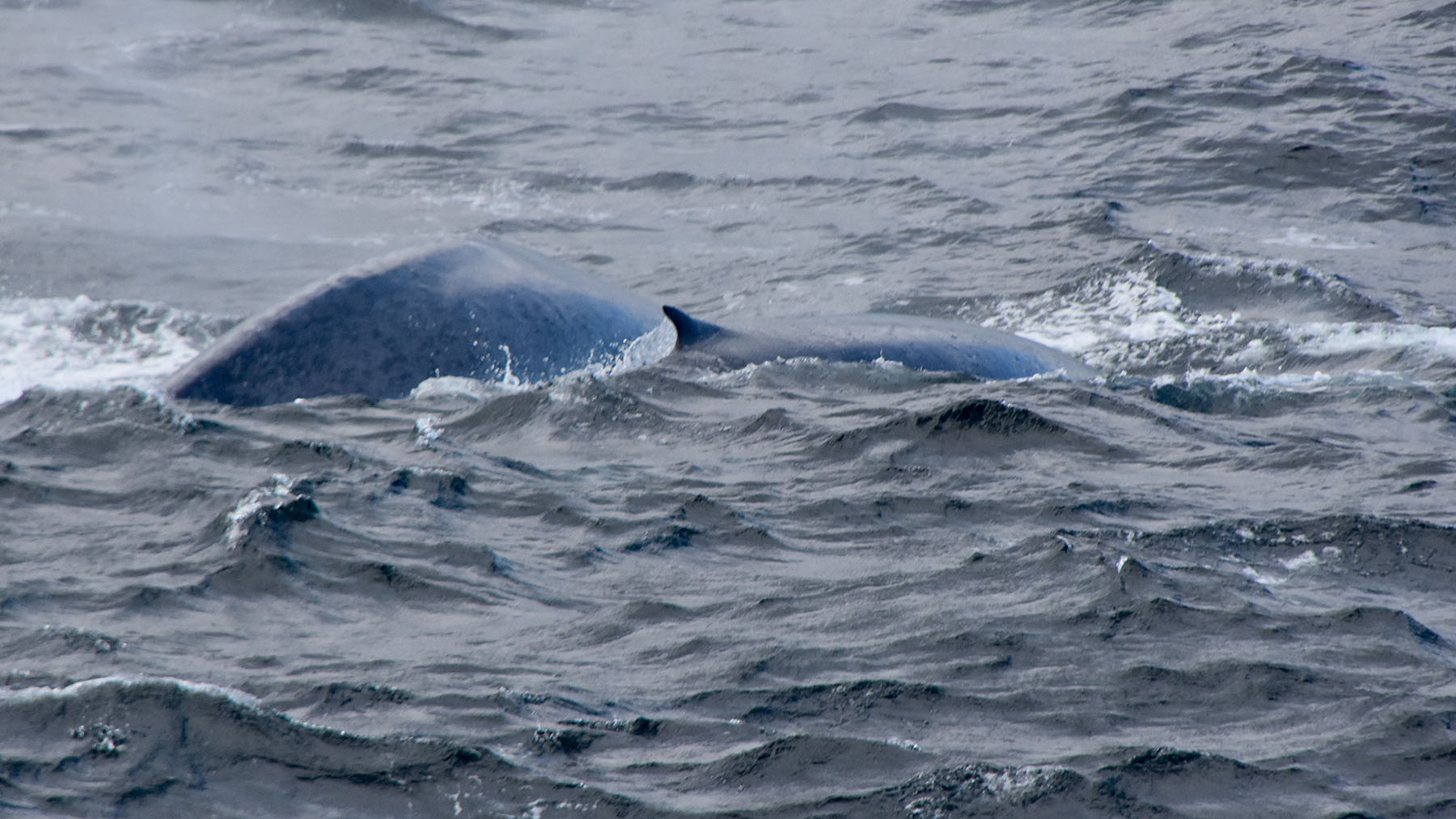 Day 11 found us in South Georgia where our first stop was Ernest Shackleton’s grave. As a longtime admirer of this intrepid explorer, I was excited to fulfill my dream of paying tribute to Shackleton by taking part in the traditional whiskey toast. I don’t like whiskey, but I was willing to take one for the team

Later on, during a spectacular sunset, we saw a sun pillar—a rare event caused by light reflecting off ice crystals. One of the naturalists, who’s worked in Antarctica for 25 years, said it was only the second time he’s witnessed this phenomenon. While it was difficult to capture photos of the sun pillar, the sunset was as photogenic as ever. 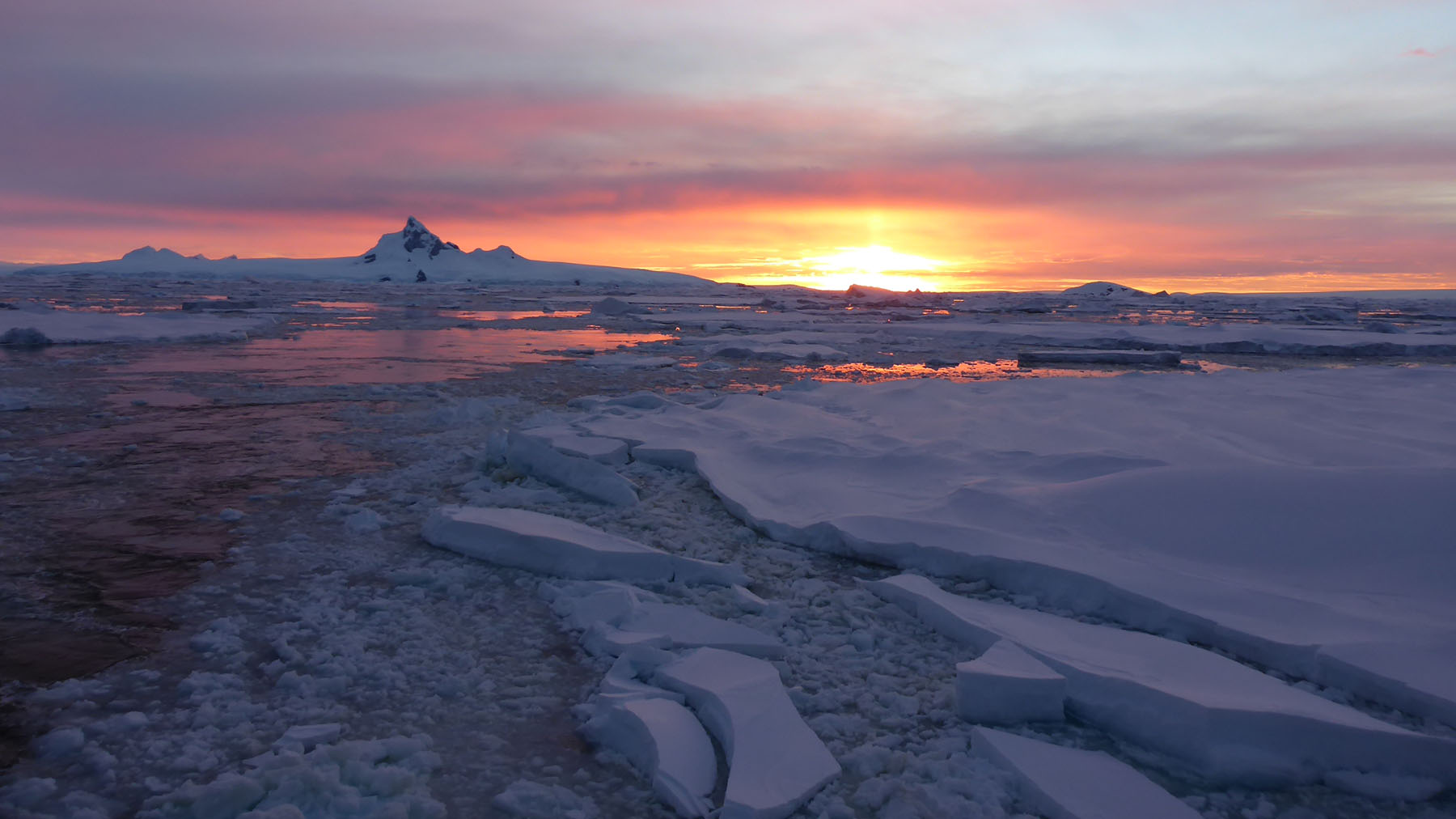 Because I’m a penguin expert, the highlight of this expedition was Day 12, watching the sunrise in Gold Harbor, South Georgia, amid a massive king penguin colony! It was a riot of color—and most definitely worth the 4:45 a.m. wake-up call.

On day 15, we saw sperm whales—another species I never expected to see in my lifetime. Three large individuals, with their wrinkly skin and unique left-sided blows, logged at the surface for about 15 minutes. We watched from the ship’s deck and gasped with delight as they slowly arched their backs to dive beneath the surface, disappearing into the inky depths. 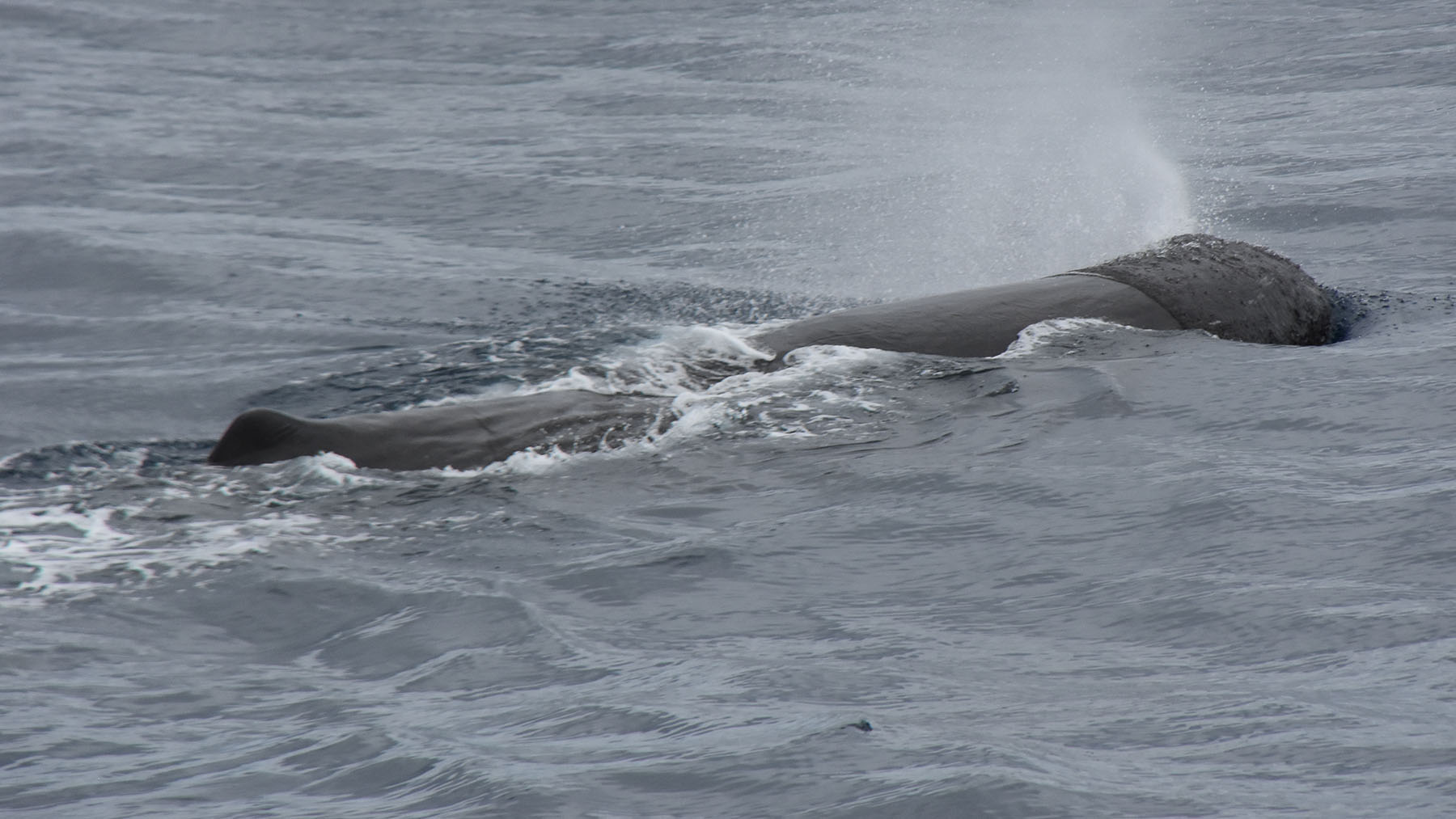 Before the expedition’s end, I experienced several other “firsts” that included seeing wild rockhopper and macaroni penguins, wandering albatross, an albatross colony in the Falklands, and more. Every minute of the voyage took my breath away. Antarctica has a way of getting into your blood, and each trip leaves me wanting to return. Now, I feel the same way about South Georgia. Turns out my well-traveled friends were right!

Dyan deNapoli (aka The Penguin Lady) is a renowned penguin expert, TED speaker, and award-winning author. She is on a lifelong mission to raise awareness and funding to help save the world’s threatened and endangered penguins. Read more about her work at thepenguinlady.com.