Our thoughts go out to everyone impacted by the invasion of Ukraine. We are closely monitoring the situation and hoping it will be resolved soon. In the meantime, we are making alternative plans for our departures that call in Russia. We will continue to make adjustments to our itineraries as necessary. Lindblad Expeditions will directly follow up with guests with more detailed information as it becomes available.

A mythic land under the midnight sun

The Arctic is imbued with a romance—from the history of polar exploration and dauntless early Vikings to the 18th- to 21st-century Northwest Passage and North Pole explorers. It has a reputation for extraordinary beauty and majesty, which is reflected in its central symbol, the polar bear. We’ve explored it for over 30 years, which enables us to offer an Arctic expedition exploring several diverse sectors of the vast Arctic geography—and assure your safety and comfort. With a fleet of three top-tier ice-class vessels fanning out across the vast Arctic, we offer a great variety of ways to explore this region. Discover cultural centers like Iceland, the iconic coasts of Norway, the ice edge of Greenland, and so much more.

A Circumnavigation of Iceland

A Circumnavigation of Iceland

Our Ships in the Arctic

Read firsthand accounts of kids' adventures with us in the Arctic.

See, do, and learn more by going with engaging experts who have been exploring this region for decades. Go with an expedition leader, naturalists, undersea specialist, National Geographic photographer, and more.

Veteran expedition leaders are the orchestrators of your experience. Many have advanced degrees and have conducted research or taught for years. They have achieved expedition leader status because they possess the skills, the experience, and the depth of knowledge necessary to continually craft the best expedition possible for our guests.

Explore the Arctic with a team of naturalists—many of them polar veterans—with a variety of specialties: zoology, biology, ornithology, geology, polar history, and more. Our guests consistently cite the expertise and engaging company of our staff as key reasons to repeatedly travel with us.

Travel and photograph with a bona fide National Geographic photographer. These top pros are at your side and at your service—providing advice, tips, and slideshows. Access to photographers of this caliber will help you improve your skills and ensure you’ll go home with incredible photos.

Every Arctic expedition also offers an exclusive service—a Lindblad Expeditions-National Geographic certified photo instructor. This naturalist is specially trained to help you become a better, more confident photographer—and to help you understand the movements of wildlife so you can create top shots.

Video chroniclers accompany every expedition and shoot vivid HD footage—with no recycled footage ever—to provide you with a professionally edited and completely authentic memento of your expedition. Working during the day and editing into the night, they have your DVD ready for preview prior to—and available to purchase at—disembarkation.

The cultural activities were wonderful and it seemed like we were warmly welcomed each time we stopped.

Today we awoke on National Geographic Endurance to beautiful pink skies and icebergs passing by the ship as we sat down for breakfast. We enjoyed a nice cruise into the furthest northwestern fjord of Scoresby Sund. Today was a lovely day filled with ice and dramatic scenery, making it hard to walk away from the window for even just a moment.

Here in the North, the weather is fickle. It was only yesterday that we were racing to escape the strongest winds the ship has ever faced. Yet, in the early hours of the morning, we were rewarded with calm waters and clear skies. The most spectacular northern lights of the voyage welcomed us into this new fjord, churning and twisting like green and purple flames. It only takes a quick look up into the sky to realize why the belief in magic has endured in these latitudes.   As soon as the aurora was replaced by the sun, the expedition rushed into the Zodiacs to cruise and explore the fjord. The glacier, flanked by the brownish traces of its past glory, towered above our boats like a giant. Only the peaks surrounding it seemed big enough to contain the glacier’s inexorable advance. Everyone aboard our fleet was mesmerized by the whites and blues of the frozen colossus. After gazing at it for hours, we reluctantly made our way back to the ship, where we enjoyed a well-deserved lunch.   After a short break, our expedition headed back into the Zodiacs. This time, however, instead of cruising through the water of the fjord, we had the opportunity to go ashore. Setting foot on one of the oldest lands in the world is hard to convey in just a few words, even more so when one is walking under the gaze of the ancient geological layers present in every surface protruding from the water.   Going back to the ship keeps getting harder and harder every time as the wonders of Greenland unravel before us.

This morning at 7:00 am was noticeably darker than days before. One reason for that was the grey sky, however it wasn’t the main one. The days are getting shorter and shorter very fast at this latitude and this time of a year. The sea was rough, but not too much, wind 4 knots, and a scouting party was sent ashore of the Blomsterbugten, a little bay within the Kaiser Franz Joseph Fjord System. This fjord is a part of the Northeast Greenland National Park, the largest national park in the world. Three morning activities were offered for the guests, including long and medium hikes as well Zodiac cruises. The geology of the surrounding cliffs and mountain slopes was quite spectacular.  Thousands of red, yellow, brown and dark-grey layers filled all the space between the sea water level and the clouds.  The hikers had opportunities to watch a couple of Arctic hares that already changed their coats to the winter ones. A family of muskoxen were observed and photographed at a close distance. Meanwhile, the wind and corresponding waves were getting stronger, and the Zodiac cruising was a memorable event for those guests who had chosen this activity.   As lunch was being served, the wind picked up to 70 knots per hour (126 km/h) and, as our Captain Oliver reported to us at the evening recap, the wind was gusting to only a fraction below 100 knots per hour (180 km/h). This was the record wind speed for this ship so far! The wind was raising billions of sea water droplets that reflected the sun light and created a rainbow just along the sea surface. The ship showed no deviation from the intended route, but the captain made an announcement advising guests not to go on the open decks to be safe. From inside, the storm was quite special to watch, as the sky was blue and sun was shining during it.   In the late afternoon, naturalist Jim Wilson made an excellent presentation overviewing bird migrations and the ways they were studied.

The day began with plans to land and hike at a spot about halfway into Storefjord. Fresh snow on the hills created a scene with a distinct autumn vibe; summer has ended here in East Greenland.   Approaching the landing, we spied a polar bear sow and cub chewing on something right on the beach we hoped to land. While she and her cub moved out of sight, their presence there required a plan B for the morning, so National Geographic Endurance sailed into a small unnamed tributary of the main fjord. Information about water depths here is unreliable so the ship moved cautiously, using the latest sonar technology to sound our way into the end of this new-to-us fjord. What we found was a huge open alluvial fan filling a glacial valley that seemed perfect for exploring.   With scouting complete and sentries on station, we shuttled ashore for a walkabout. The entire area consists of glacial moraine – unsorted rocks and boulders dominate the landscape, with melt water streams and sandy berms mixed in – making for some slow and careful walking. However, one didn’t need to go far to enjoy the landscape that surrounded us.   The philosophy of exploring with flexibility, allowing plans to evolve and change, adapting to what the planet offers each day, paid off in spades this morning. I wonder what tomorrow has in store for us?

The crossing from Iceland to the coast of East Greenland was smooth and surprisingly speedy! We made good use of the morning at sea with mandatory briefings to prepare for the Arctic, a fun talk by Dagny about life and culture in Iceland, and some seabird spotting. By late morning, the forbidding, dramatic Blosseville Coast appeared on the port side of the ship. This flood basalt landscape features some of Greenland’s highest mountains in its rarely glimpsed interior, and it makes for a perfect introduction to this harsh part of the world.   As we prepared to enter the fjord proper, a surprise quickly presented itself. What looked for the longest time like a snow patch turned out to be the first polar bear of our voyage. The bear was a beautiful individual that looked to be in good shape with a few weeks to go until the return of the sea ice for the winter. After getting impressively close with the ship and observing the bear from the bow, we made our way into the fjord in preparation for an afternoon Zodiac cruise. Our first observation was a rare meteorological phenomenon–sun dogs were visible around the sun. These bright spots are part of the 22° halo caused by the refraction of sunlight by ice crystals high in the atmosphere.   Our Zodiac cruise turned into a real wildlife spectacle! Within a few minutes, we spotted two walrus and yet another polar bear resting on the beach. We had fantastic views from the Zodiacs. With our voices lowered, we enjoyed the bear as well as a group of harp seals that swam past the boats. Further inside the fjord, the first slivers of grease ice coated the water, harbingers of the approaching winter. Nights are cold enough for ice to start forming in calm conditions.   Towards the end of the cruise, we came across a shy bearded seal hauled out on a flat iceberg, basking in the late afternoon sun. With such a famously skittish species, we took care to approach slowly and to maintain appropriate distances, and the seal was undisturbed by our presence. This was a particularly rewarding way of interacting with wildlife.

The Arctic is clearly a place we should seek to better understand and appreciate—for its own sake and for the sake of the world at large. 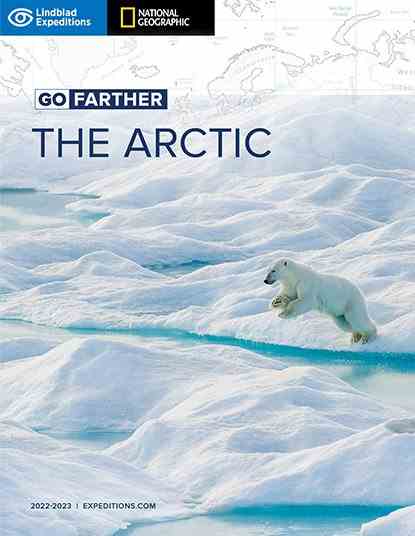