The ocean may be our business—but for us it’s certainly also a pleasure. We spend our lives sailing on it, snorkeling in it, photographing it, writing about it, and exploring it from top to bottom. Over the years we’ve had countless inspiring experiences on the water and we’ve seen lots of thrilling marine life—but sometimes the ocean surprises even us beyond our wildest expectations. Here, Lindblad staff share some of those powerfully moving and unforgettable moments with our blue planet.

I was in the Southern Ocean this February, aboard the National Geographic Explorer. As we were leaving Elephant Island, where Shackleton and his men made landfall after the loss of the Endurance in 1915, we must have passed into an area rich in food, as suddenly, all around us were whale blows as far as the eye could see. We were in the middle of a huge feeding aggregation of perhaps 150-200 fin whales. As the whales surfaced at staggered intervals, the peppering of blows appeared almost like fireworks. Occasionally three or four would surface in synchrony; surfing the swell before disappearing back down. It occurred to me, as we watched this incredible natural display, that at the time of Shackleton’s ordeal, this may have been a commonplace encounter across the Southern Ocean; whaling in this region having only been up and running for 10 years. However, over the following decades, it’s estimated that more than 700,000 fin whales would be taken from these waters, pushing the population down to critically low levels. By the time of the International Whaling Moratorium in the 1980s, what was left were relatively silent seas. To see such a thriving abundance of life, here in the heartland of commercial whaling, filled me with incredible hope for the future, and I’m not ashamed to say it brought a little tear to my eye. It spoke of the resilience of marine life and illustrated so perfectly how, if given time and space, a species can rebound. There is still work to be done protecting our marine ecosystems, but that work is not in vain and positive change can happen.   —Ella Potts, Naturalist

AN INTIMATE CONVERSATION WITH A LEOPARD SEAL

It was a beautiful summer afternoon. The temperature was a balmy 30˚F. That’s summer in Antarctica! A group of us had spent the past hour exploring the ice-filled ocean in a Zodiac. National Geographic Explorer’s hotel team had just delivered us hot beverages (Zodiac-to-Zodiac service!) and although we saw others heading back to the ship, we were reinvigorated to continue exploring. We noticed a leopard seal on a nearby bit of ice and approached for a closer look. The leopard seal, perhaps in search of some privacy, dove off the ice and into the ocean. As the seal swam under us, we began to hear a low humming sound. Everyone in the Zodiac went quiet, listening. Our driver repositioned, and we heard it again! CT Ticknor, one of the wonderful naturalists we had the pleasure of exploring with, identified the sound—it was the leopard seal vocalizing with us! Well, vocalizing with the engine of our Zodiac! Our driver began to rev the engine for a few seconds at a time, and with each rev the seal responded enthusiastically. We were in conversation! CT told us that this was a very rare occurrence. She was awed that we were communicating so intimately with this animal. It was more than witnessing; it was interacting. Seeing CT’s true excitement and joy added another layer to the emotion that all of us were feeling. It was confirmation that we were indeed part of something amazing, and the moment was truly special.   —Gina Golba, Guest Communications Manager, and Mary Torres, Program Manager in the New York Office

MAKING FRIENDS WITH THE FRIENDLIES

When I’m asked where my favorite Lindblad Expeditions destination is it’s hard to not immediately say Baja California.  I was lucky enough to visit this region a number of times as a young child and revisiting this fascinating geography now as an adult reminded me why it’s always been so special to me.  I will always do my very best to visit this place, and these incredibly friendly and curious whales, as often as I can for the rest of my life.  —Jeremy Lindblad, Global Business Development Director

FLOATING OVER A WALL OF SHARKS

As Expedition Leader aboard the National Geographic Orion I decided we should go and explore the famed South Pass of Fakarava. I was skeptical that the stories would be embellished. We rolled off the Zodiacs for our drift snorkel on slack tide. As the bubbles cleared, I could see several grey reef sharks below me. After a few minutes the incoming tide began to gather speed, soon we were flying over beautiful coral and schools of fish. In front of me, was a wall of grey reef sharks. A literal wall of sharks from the surface down to the sea bed more than 100 feet below. I have never in my life seen anything like it. I started to laugh underwater in disbelief, so much so that my snorkel filled with water. As a shark biologist I have helped track species using satellites in space, surveyed marine protected areas for illegal fishing and even lived on commercial fishing boats, keeping count as sharks were hauled over the side and processed. But in all my travels, for research and filming documentaries around the world I am yet to find anywhere like the South Pass of Fakarava. To be able to fly through the water with sharks, on their own terms, no bait, no chum. Just tides and corals. It’s what I had been searching my whole life for. —Jimmy White, Expedition Leader

DANCING WITH A DOLPHIN 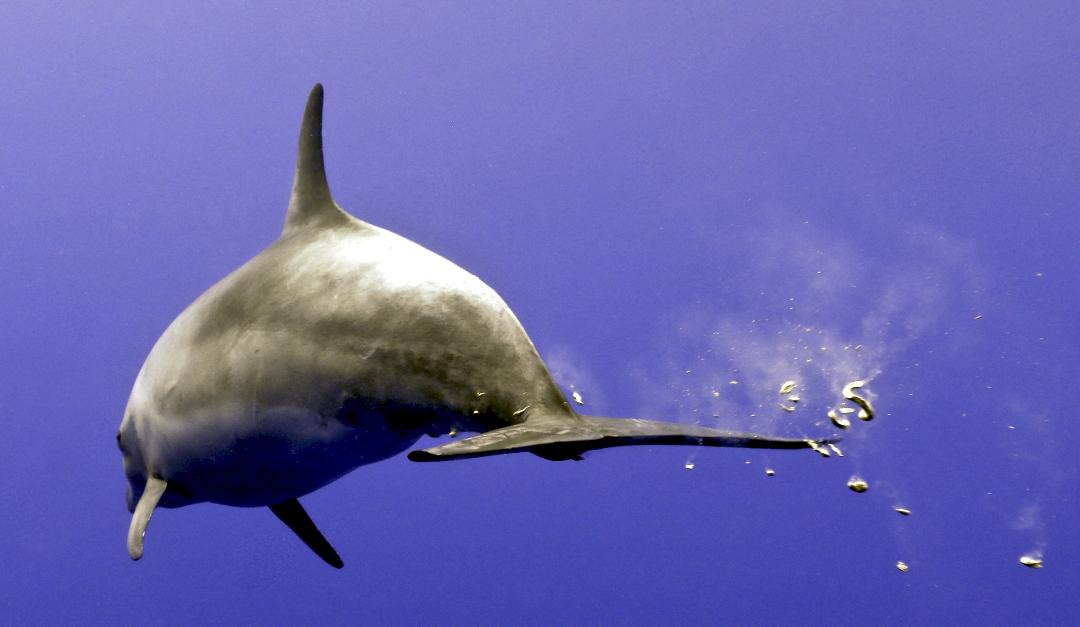 There are moments in the ocean when I’m caught in a major conundrum. Get the shot or put the camera down and just be in the moment. Sometimes, you get lucky and you end up doing both. We had one of those moments in the pass at Rangiroa in French Polynesia during a sunset dive. Big pods of dolphins had welcomed the National Geographic Orion as we sailed into Rangiroa, so we were hoping they might come to play. You hear them first, ears tuned to catch that fine frequency that vibrates through the water like melodic chirping. They made one quick pass and so we followed them into the blue. Soon enough, they were back, clearly with a mission….to head into the pass to do a sunset surf session on a series of large and concurrent waves that are created as the current shifts and water flows through the atoll. Yet they clearly wanted to say hi, and when I realized they were coming straight at us, I started shooting away. And closer, and closer, and soon one specifically came swimming alongside me, inviting me to dance. The opportunity to connect eye to eye, heart to heart, spirit to spirit with these curious, intelligent, and playful ocean creatures far triumphs any photo that I could have taken into the depth of a dolphin’s eye. At least for this day it did. That dolphin and I fell in love right there and for one blissful second, we were weightless together suspended in French Polynesia and there was not a care in the world. And then with a flick of a tail, it was off to surf the waves, but that intimacy we shared lingers on.  —Kristin Hettermann, Founder of OCEANSCAPES Photography 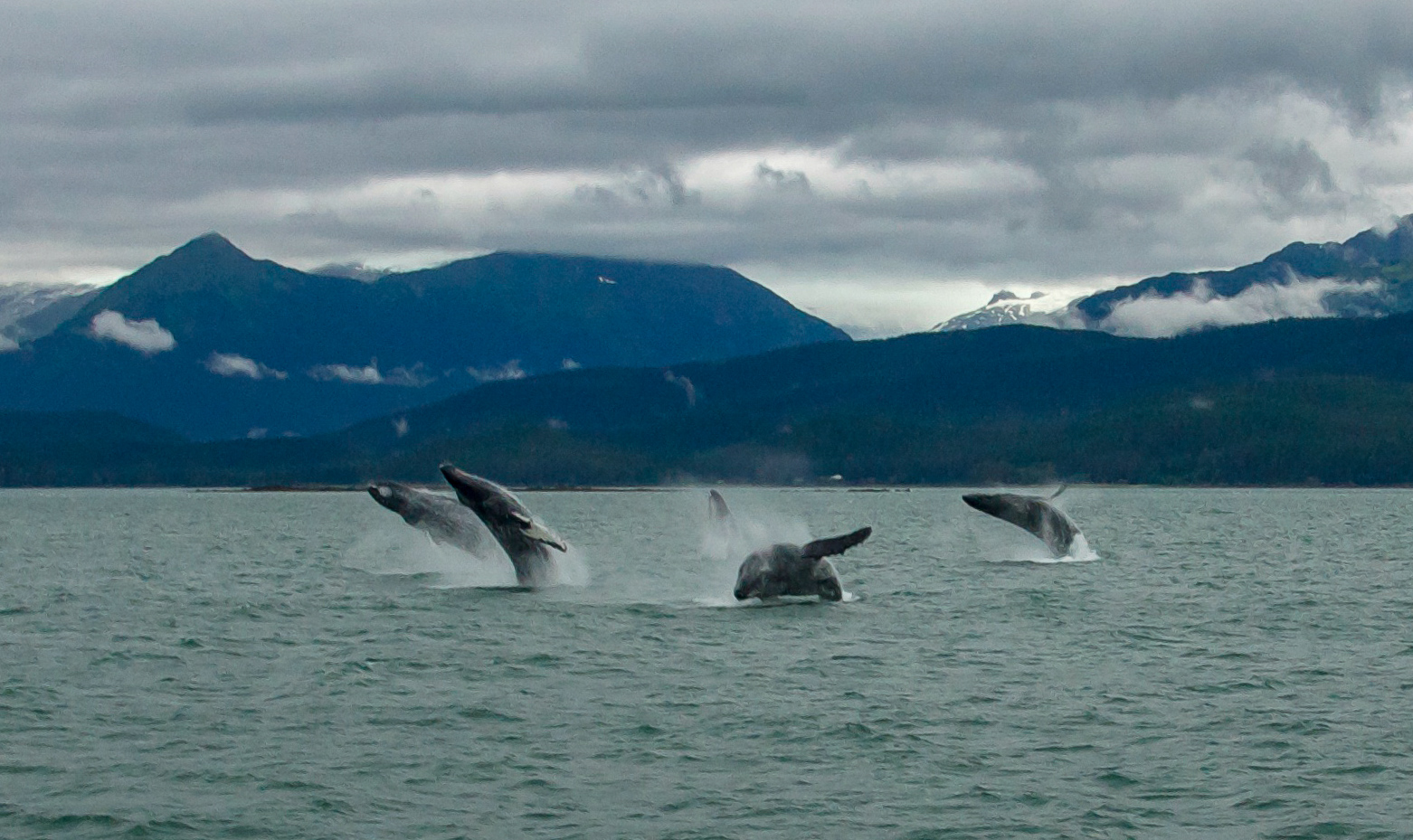 Back in 2016 I was working on a whale watching boat in Juneau, Alaska, which in the middle of the summer is exhausting, but amazing. It is peak bubble-netting season, and at that time, the group of humpback whales that had been in the area feeding for about a month was incredibly consistent. They would dive down for 7-8 minutes, set a net, then come back up and feed over and over; when the baitball was depleted, you would know because at least three of the whales would begin to breach repeatedly until they turned to travel and find a new school of herring to eat. One morning, we found this group of bubble-netters, and watched them set a couple of nets up and down Favorite Channel. With one other boat coming up to watch them, we get ready to leave the area, when all of a sudden five whales jump out of the water at the exact same time—in a star formation, as if they were synchronized swimmers. I look at my captain in utter confusion, we radio the other boat saying, “Um, did you just see that?!” Evidently, that was their signal that they had found all the food in the area, because we did not see a member of that bubble-netting group for the rest of the day, or even season, in the Juneau area. —Jill Niederberger, Naturalist

Your own amazing ocean moment is waiting for you. Discover it aboard one of our many ships sailing in destinations around the globe. And get an incredible look at the seldom-seen world beneath our ships with our exclusive undersea program.

Guest Spotlight: A Poignant Return to Attu in ...