“We eat an emensity of meat; it requires 4 deer, or an elk and a deer, or one buffaloe to supply us plentifully 24 hours.”
–Captain Meriwether Lewis

On July 13, 1805, this quote was inscribed in the journal of Captain Meriwether Lewis & Lieutenant William Clark. That fascinating peek into their diet sheds light on how physically taxing the Corps of Discovery expedition truly was. One of the earliest exploratory missions to the Pacific Coast, the famously arduous trip required stamina, resourcefulness—and clearly, a whole lot of meat! When wild game was abundant each Corps member ate up to 9 pounds a day. Along with the above, the men hunted, foraged or bartered with Native American tribes for a wide range of foods (many of which they had never tasted before). Things like burrowing squirrel; beaver tail; wild licorice root; wapato (a small starchy tuber); wild onions; and currants all made it onto their plates.

Read more about the Corps of Discovery diet in this fascinating post from PBS.

The Pacific Northwest is still known for its incredible bounty and some of the freshest ingredients around. Thankfully, expedition dining today looks quite a bit different than it did for the Corps. You can look forward to meals that celebrate the region’s world-famous flavors like a vibrantly pink coho salmon filet, bright green coils of fiddlehead ferns and a bottle of terroir-rich Pinot Noir. 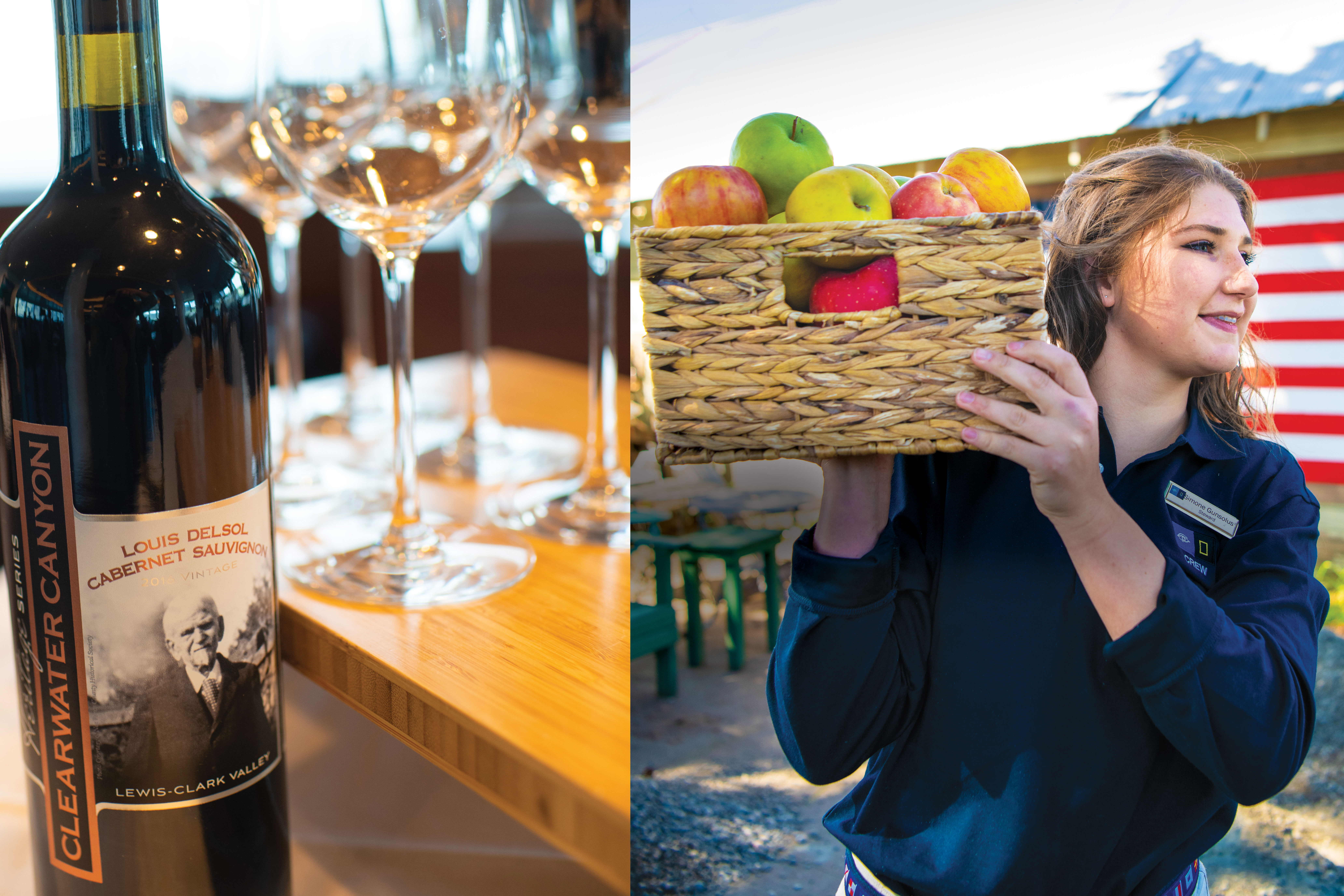 “It’s such productive and fertile soil, and everything that grows there is so unique,” says Ana Esteves, Director of Hotel Operations for Lindblad Expeditions. Esteves oversees the culinary programs on board the ships, working with Lindblad’s chefs to identify local vendors who are focusing on sustainable methods to grow the absolute best products. Those carefully selected products show up on menus and in tastings on board the Pacific Northwest itineraries, and guests often get the chance to meet these producers on their own turf and even stock up on delicious souvenirs so they can bring home a taste of the region.

While on expedition in the Pacific Northwest, if you happen to taste an intensely flavorful, garlicky green on your plate next to the locally raised lamb chop, it’s very likely ramps grown in the region and handpicked for your dinner. “We have a guy named Rick who is a forager, and he forages mushrooms, fiddleheads, and ramps for our Columbia and Snake River itineraries,” says Esteves.

The menus on each voyage depend on what’s fresh and in season that week. “We’ll give Rick a call and ask him what he’s finding. Then we’ll create our menus as we go based on what we discover that’s unique to the area,” says Esteves. 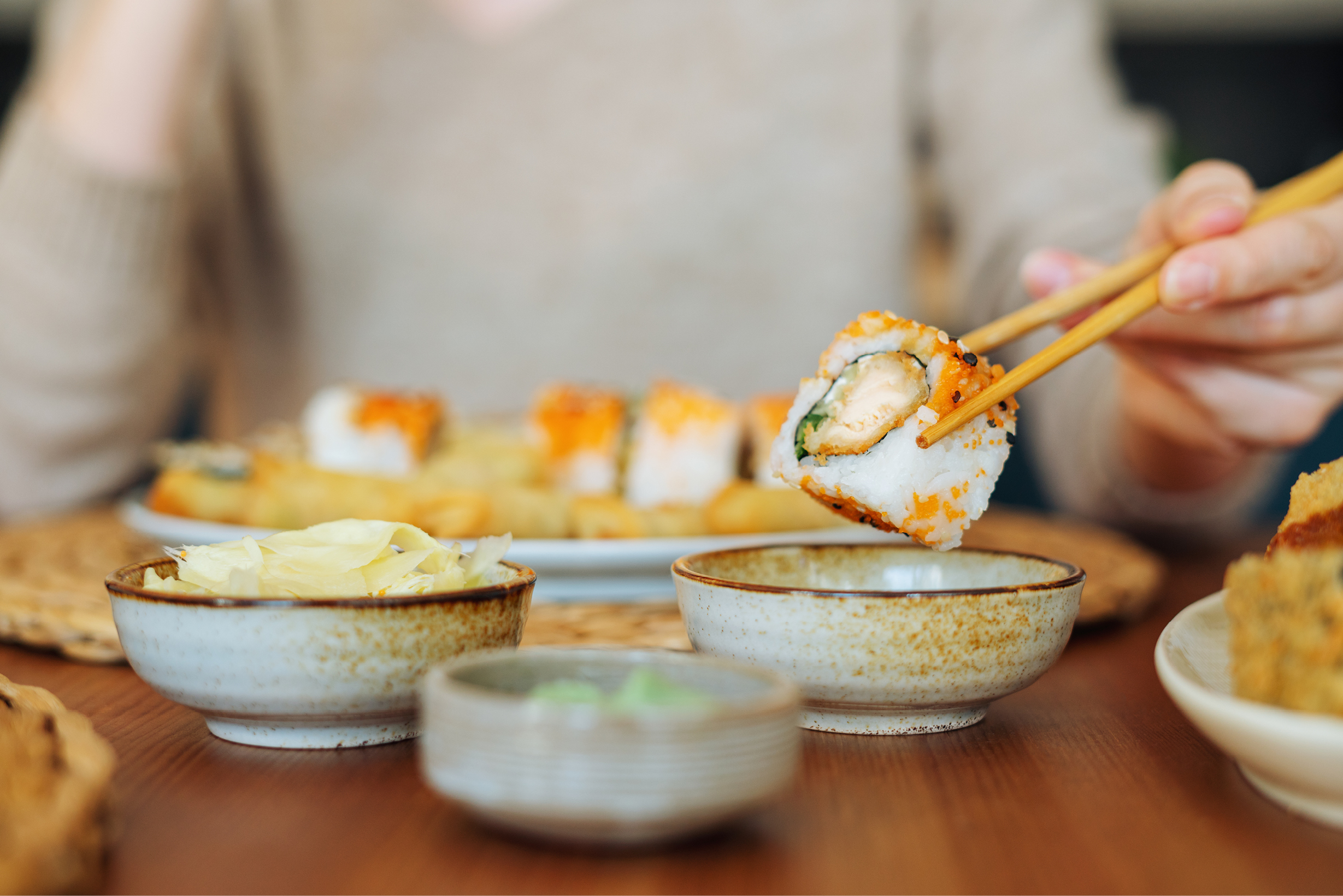 As for that wild salmon, the famous Pacific Northwest species are especially abundant in spring during the annual salmon runs. Esteves and the chefs source the most sustainable, flavorful fish for each menu. Currently, it’s coho and sockeye salmon, both highly sought-after varieties. “They’re wonderful either cooked, cured, or served raw. They have that buttery finish in your mouth,” explains Esteves. Coho or sockeye will typically show up in a range of styles on the menu, as salmon filets, house-smoked salmon chowder, salmon jerky, and salmon sashimi. Eventually, when the local population of wild king (also known as Chinook) salmon gets replenished in the region’s waters, Lindblad will serve it again; currently it’s off the menu, in keeping with the company’s commitment to sustainability.

All the meats on board, from the beef and the lamb, to the pork, chicken, and duck come from local farmers. And every grain in the plant-based vegetarian dishes—from lentils and farro to a wide range of flours—comes from a grower in Spokane, Washington. Some products have their own fascinating backstories. One excellent example: Oregon’s Ninkasi Brewing Company, which is named for the ancient Sumerian Goddess of Fermentation. The brewery saves up the grains used in making its craft beers, then upcycles them to a cattle farm for the cows to graze on. On the Columbia and Snake River trip, you can taste the beef from that farm while enjoying one of Ninkasi’s flavor-filled beers.

The carefully sourced ingredients are all part of what Esteves calls Lindblad’s “farm-to-ship” program. But it’s not only the chefs who get to go out and meet the farmers. Guests sometimes do too, in experiences like the “fruit loop” adventure around the Hood River Valley’s apple and pear orchards.

“The chefs are there with the guests, picking up ingredients for the ship and answering questions,” says Esteves. “They might also pick up local cider and honey for the ship, and guests have the opportunity to do that too. The itineraries are programmed in a way that allows guests to be part of the food experience.” 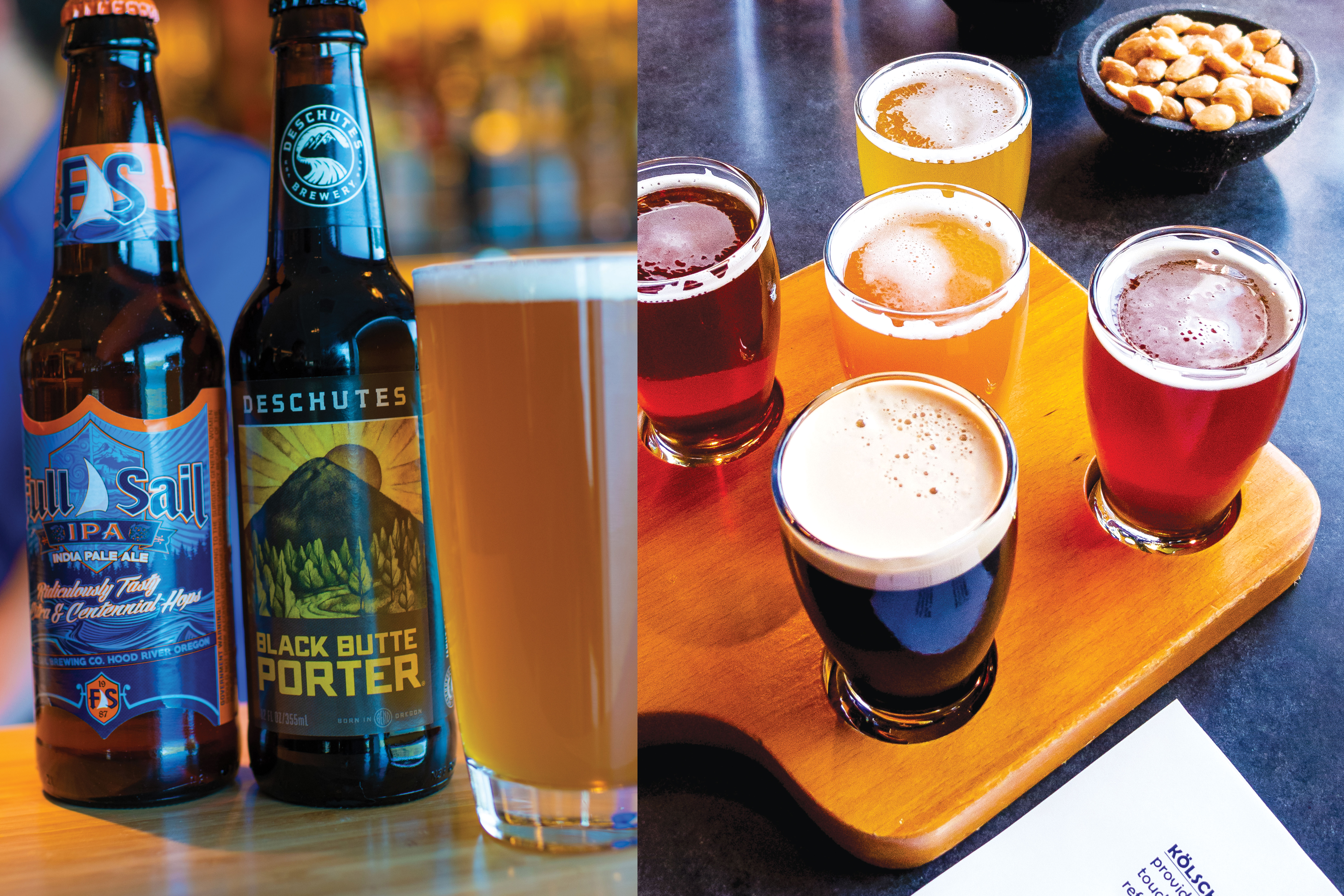 On the British Columbia and San Juan Islands voyages, guests can visit Washington State’s Aurora Farms, where Esteves and the chefs source a slew of ingredients. For a special dinner served on some cruises, “100 percent of the ingredients come from Aurora Farms,” says Esteves. A menu might include a Pacific wild halibut topped with edible flowers, a lamb chop seasoned with a rub made from local coffee, and a dulce de leche dessert made from cream from the farm.

The wine tastings offer another chance to interact with the people who create the Pacific Northwest’s coveted bottlings, on wineries in and around Oregon’s Willamette Valley and Washington’s Walla Walla regions. During eastbound itineraries, a winemaker from Clearwater Canyon Cellars comes on board to host a tasting. Pinot Noirs from Sokol Blosser, a family-owned sustainable winery in the Willamette Valley, are another longtime favorite on Lindblad’s ships. You might sip a glass with cheeses from Oregon’s Rogue River or the San Juan Islands creamery, and indulge in exceptional charcuterie from Olympia Provisions.

If you can’t part with the flavors after the trip is over, the good news is you can source some online or at your local specialty foods purveyor. It won’t be quite the same, which is why, chances are, you’ll soon find yourself plotting your return visit to this one-of-a-kind corner of the world.

Lindblad Expeditions is proud to provision our ships in perfect harmony with the terrain we explore. To get a taste of some of the culinary experiences mentioned above join us aboard one of our Pacific Northwest itineraries.

Capturing the Channel Islands: A Remote ...