What it’s Like to Swim with Sharks Around the World

Discovery Channel’s Shark Week has lasted for three decades—longer than any other cable show—and continues to show viewers how fascinating the species is. Sharpening your appreciation for sharks in front of a screen, however, is far different than spotting them just beneath the waves near your boat or just off the beach as you snorkel in a coral reef.

Close-up shark encounters in their natural habitat is a thrill that relatively few people experience and even fewer forget. And they are quite safe. In fact, in-water shark encounters are a highlight for many travelers on our Galápagos, Baja California, Belize & Guatemala, and South Pacific & French Polynesia trips. 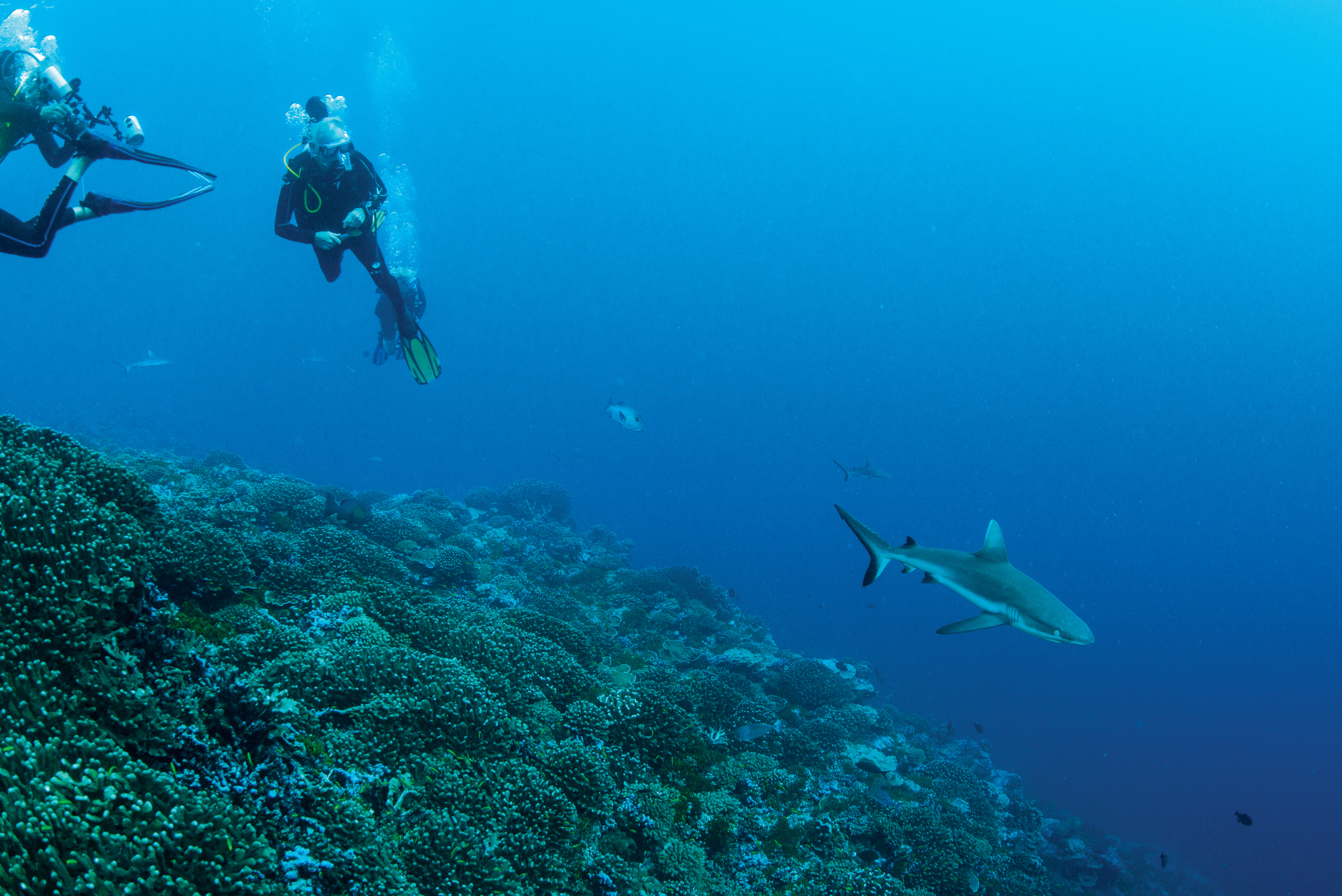 Shark biologist Jimmy White, PhD, calls his shark encounter while leading a Lindblad trip off the French Polynesian island of Fakarava the experience of a lifetime. “Soon after we rolled the [inflatable] Zodiacs off the National Geographic Orion for our drift snorkel at slack tide, the incoming tide began to gather speed,” he recalls. “Suddenly we were flying over coral, schools of fish, and a literal wall of grey reef sharks—from the surface down to the seabed, more than 100 feet below us. To move through the water with sharks on their terms—no bait, no chum, just tides and corals—is what I’d been searching for my whole life.”

White and his Lindblad colleagues recently discovered new areas for diving and snorkeling in French Polynesia, where travelers can see hammerhead sharks and manta rays together. And on one recent French Polynesia expedition, an oceanic whitetip shark surfaced at the bow of the ship while passengers were observing a pod of pilot whales. He called both “incredibly rare, once-in-a-lifetime wildlife encounters.”

Most people know little about sharks except for what they see in countless horror movies (Jaws, Open Water, Sharknado, etc.) and occasional news reports about attacks. In reality, no sharks—not even great white sharks—crack the top ten most dangerous animals to humans—various lists put fellow humans, mosquitoes, or box jellyfish at the top. Most shark species are harmless.

“The 400-plus species of sharks in the oceans range from high-order predators like great whites and tiger sharks to the epaulette shark, which walks on its fins out of the water between rock pools,” says White. “Each one fills an important ecological niche, and their presence in the ecosystem of the world’s oceans offers insights into the overall health of the marine environment.”

On our Wild Baja Escape expedition, many travelers choose to add a “Shark Extension” to spend a morning on La Paz Bay spotting or even swimming with whale sharks. These are the world’s largest fish, measuring up to 12.5 meters (41 feet) long and weighing up to 47,000 pounds. The filter feeders have evolved with large mouths not to threaten prey but to swallow plenty of plankton and occasional small fish. Swimming with whale sharks is a highlight of many trips in the Galápagos, too, where hammerhead and reef sharks are also routinely spotted in the shallows. And on South Pacific & French Polynesia trips, travelers can pet tawny nurse sharks in shin-deep water and may also see blacktip, whitetip, silvertip, grey reef, and hammerhead sharks.

Overfishing and reef habitat loss have contributed greatly to the shrinking numbers of many shark species, with shark populations worldwide in rapid decline and some species threatened with extinction. This matters because sharks are the top predators of the seas, responsible for keeping other marine life in a healthy balance. Studies show that regional elimination of sharks can cause disastrous effects, including the collapse of coral reefs and fisheries.

White believes that Lindblad travelers can come to appreciate sharks more by entering their world on shark dives. “There is nothing like the moment you see your first shark in the water,” he says. “It’s a privilege to encounter these incredible animals in the wild. Those are the moments you travel for and the memories that will live with you long after.”