The southernmost island of the Cyclades, Santorini was named for its patron saint Irene, who died here in exile. Known as Thera to the Greeks, millennia ago, the island was home to an advanced society that lived well but fled in haste before one of the most catastrophic volcanic eruptions of all time blew a hole in its center, leaving a caldera. The eruption in 1628 B.C. destroyed two-thirds of the existing island, creating the largest caldera on Earth—more than five miles across and 1,300 feet deep. It was an incident of such magnitude that it has been surmised to be the cause of the end of the Minoan civilization on Crete, 90 miles away; and has been suggested as the real-life event on which the legend of the lost city of Atlantis was based.

Remains of Santorini’s Minoan settlement, well-preserved for millennia under layers of volcanic ash, can be seen in the Museum of Prehistoric Thera and in the archaeological site from which the museum displays were sourced, Akrotiri. Highlights of the museum include a gold statue of an ibex and wonderful frescos such as one of blue monkeys that dates from approximately 1500 BC. Discovered in the 1960s, Akrotiri had multi-story homes with toilets on upper floors and sewer and drainage systems. Strolling through the ancient streets where the Minoans walked creates a powerful connection to the past.

From a prosperous ancient community to a current one that epitomizes the beautiful blue-and-white villages Santorini is known for: Oia. On the north rim of the caldera, the photogenic narrow streets of Oia are lined with residences, famous blue-domed churches, and shops selling everything from diamonds to gelato. It’s perched high above the caldera in a legendary location for viewing sunsets. 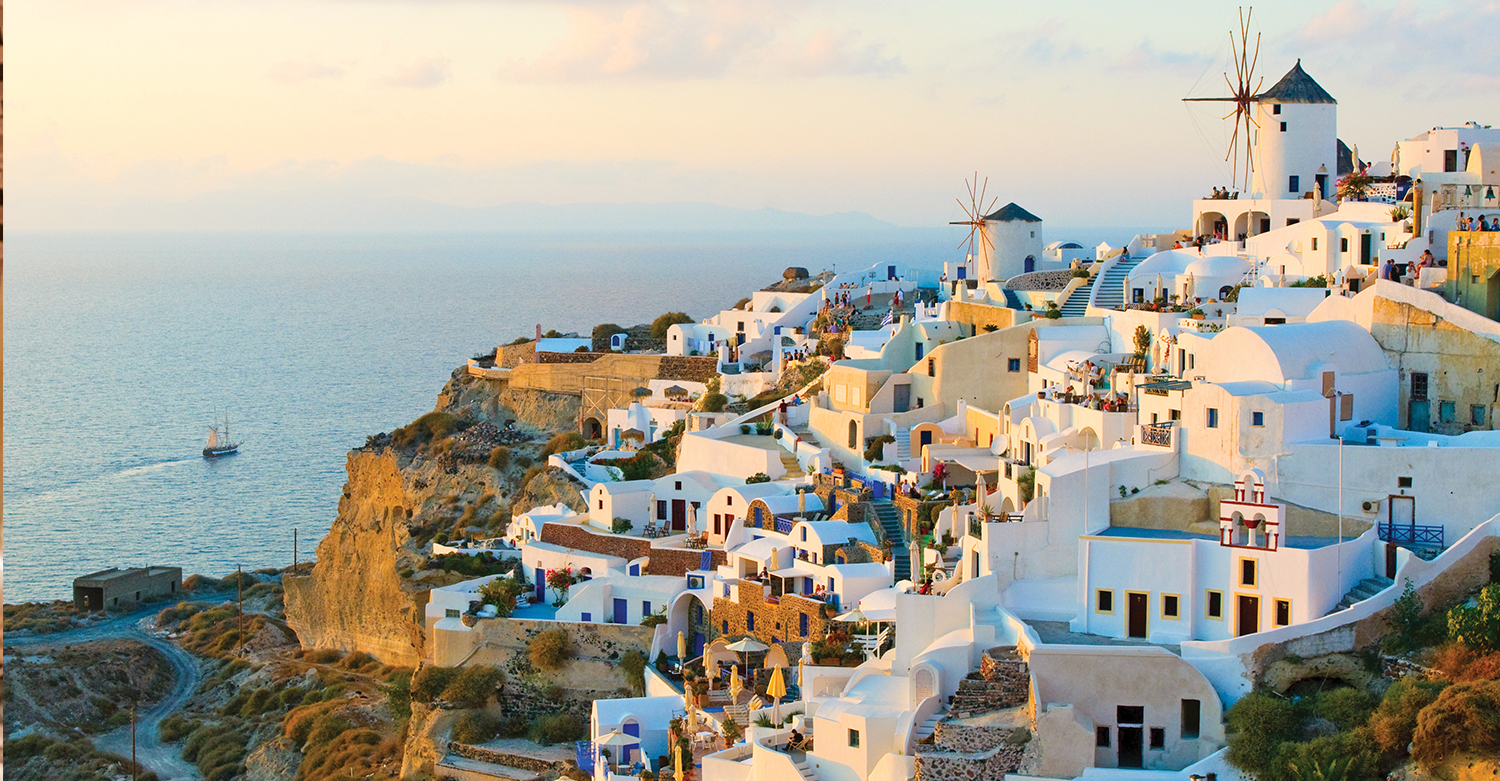 Villages historically were built far from the water to keep inhabitants safe from pirates, and building materials reflected what was available on the island. Trees are scarce so wood is uncommon. Stone is cool as is earth, so many structures on Santorini are comprised almost wholly of these natural elements. Homes have thick walls and small windows, and to protect residents further from the scorching sun and potential earthquakes, cave houses are dug into the soft volcanic soil.

As for the choice of white and blue to paint buildings, white reflects the sun and blue is a reference to the ocean, but more than that, these are the colors of the Greek flag. At one point not so long ago, it was law that buildings had to mirror the country’s national colors to show unity. Although not law anymore, many home and business owners stick to the tradition.

The combination of the island’s volcanic past, natural resources, and cultural history result in dazzling white villages punctuated by blue domes and set between the turquoise sky and the cerulean Aegean. Add fertile soil that produces tomatoes, white eggplants, fava beans, and of course the grapes that are made into Santorini’s well-known wine, and one can understand why this dramatically beautiful island is such a compelling location to visit. The icing on the cake? Looking down from Oia over whitewashed homes hugging the cliffs, down to the caldera that shelters our gracious ship Sea Cloud.