From the National Geographic Explorer in Antarctica 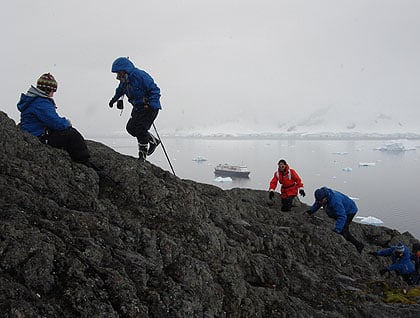 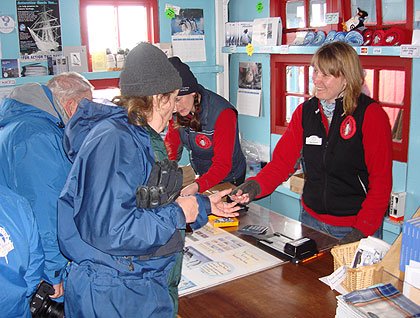 The weather in the Antarctic is dynamic; it changes not just from day to day, but from hour to hour. Anyone visiting this exceptional yet remote realm would hopefully have done just enough homework to intuit this. Even so, when the winds of change blow, the impression can be eye-opening. Our previous day was graced with sun, calm winds, and warm temperatures. This morning we awoke to a windless, sunless, cool sky. The threat of inclement weather was in the air. It was not uncomfortable due to a lack of breeze, but visibility was reduced; the scene was a monochrome world of shades of gray.

Paradise Bay is situated in the hub of Antarctic tourism operations along the west side of the peninsula, conveniently located very near the Errera Channel, Cuverville, and Neko Harbor. It is just across the Gerlache Strait from the Neumeyer Channel and Port Lockroy. It is also a short run to the Lemaire Channel and Petermann Island. All the aforementioned are top-list Antarctic tourist sites. And Paradise Bay has the moniker that tops all.

On a rocky outcrop of Paradise’s eastern shore sits a small seasonal Argentine base, Almirante Brown. For much of the early part of this century the base was unmanned. It is presently home to a small contingent of Argentine workers upgrading the base to working order. The cordial commander informed us that his government hoped to have the base fully operational by the beginning of next season.

A hike to the top of the snow-covered hill behind the base and Zodiac cruises along the shore and through the ice would comprise our morning activities here. The hike was a short one through snow, and the grade was somewhat steep near the summit. However, the path had been well-worn by previous visitors. The rocky, snow-free summit held a rich covering of mosses and lichens – hardy slow-growing life forms that had somehow managed a toehold in a very exposed location. From the summit a sheer cliff drops to the crystal waters below. A short way up the cliff from the waterline, the face is home to nesting imperial shags. Most nests held two chicks near fledging. They and the ice were Zodiac cruise highlights.

On February 19th 1904 the French explorer Jean-Baptiste Charcot sailed along the western coast of Wiencke Island in search of a suitable place to erect a beacon where he could leave news of his expedition. At this point he also needed a sheltered harbor where the leaking boilers of his expedition ship Francais could be repaired. Continuing south around Damoy Point, Charcot discovered an ideal anchorage in a small bay nestled in the southwest corner of Wiencke Island. He named it Port Lockroy after Etienne-Auguste-Edouard Lockroy, a politician who had helped to find finance for the expedition.

Following its discovery, Port Lockroy has been a refuge for explorers and whalers, part of operation Tabarin in WWII (an effort to monitor potential German ship traffic in the Southern Ocean), and then a permanent British scientific station. It is now a favorite destination for cruise ships and yachts. The former British Base ‘A’ was occupied almost continuously between 1944 and 1962. It has been restored to its former condition and is now a museum, shop, and Post Office operated by the United Kingdom Antarctic Heritage Trust (UKAHT). In the afternoon it was upon this relic of Antarctic history we descended to mail postcards and contribute money to the crown.

After graduating from Humboldt State University with a B.Sc. double-major in marine biology and zoology, he focused his academic attention on graduate work with marine invertebrates of the Pacific Northwest Coast. During his formative years he worked as a docent and volunteer with the California Academy of Sciences Steinhart Aquarium.