From the National Geographic Islander in Galápagos 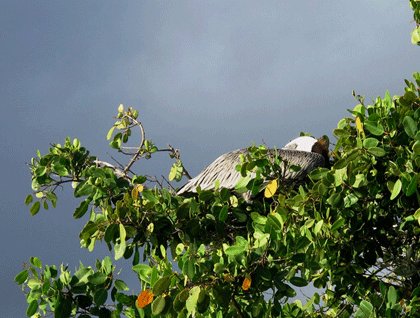 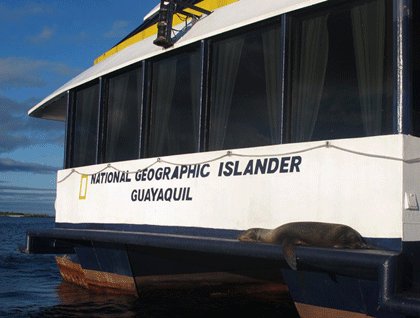 Floreana, or Charles, is one of the southern islands of the Galápagos archipelago. Charles Darwin visited it briefly in 1835, as well as many other past travelers who stopped there for various reasons: fresh water, firewood, tortoise meat. The island is protected by the Galápagos National Park nowadays and is part of our expedition this week. Before breakfast, we landed at a greenish beach, its sands mainly composed by small grains of olivine crystal. Behind the beach hides a brackish lagoon, and to our delight, a small group of greater flamingos was there today. They gave us a wonderful show of their flight skills, and their bright pink feathers glowed in the morning sunshine.

This whole area, located at the northern tip of Floreana, is called Punta Cormorant, although no cormorants have ever lived here. The trail led us through a small incense tree forest and ended at another beach, very different from the first one as its sands are white and so fine that it is called “the flour beach.” It is known for being a very important Pacific green sea turtle nesting area. We returned back on board for breakfast while the National Geographic Islander repositioned to a new anchorage.

Off the coast of Floreana there are some small satellite islets, one of which is called Champion. This islet is one of the last habitats of an endemic and endangered species: the Floreana mockingbird. Although the number of individuals is on the increase, it is still a fragile population, approximately 400 left. As we traveled by panga around Champion, we were lucky enough to spot several of them amongst some astonishing prickly pear trees. The mockingbirds are not alone here in this islet: everywhere we looked there was life. On the rocky shores we could spot blue-footed boobies, swallow-tailed gulls, Galápagos shearwaters, and brown noddy terns. The charismatic Galápagos sea lions were still there when we returned with our snorkeling gear ready to jump in the water. Of course, the underwater life is amazing, but the sea lions really stole the show today!

Lunch was due after all this activity. In the meantime, our ship had to relocate further west into Post Office Bay. This is a traditional spot in the islands, where the first barrel was placed by a whaling captain in 1793 making it the oldest post office on this side of the Pacific. The post barrel was the only means of communication between crew members of whaling ships and their families back in Britain and the US, a tradition that is still kept alive by the many modern visitors to Floreana. After collecting some postcards for eventual hand-delivery to their rightful addressees, we got into the pangas for a ride at nearby La Loberia, a wonderful group of islets inhabited by sea lions and marine iguanas. The waters here are quite shallow and several other species reach this area, particularly Pacific green sea turtles that come here to rest. A coastline full of color surrounded us: black lavas, white sands, emerald green mangroves, and turquoise waters. Sally Lightfoot crabs adorn the rocky shores, and many seabirds entertained us with their magnificent fishing skills. As the day died out, we returned to the ship to enjoy a refreshing drink and observe a wonderful sunset over the calm waters of the Pacific Ocean.

Gaby was born and raised in Guayaquil, Ecuador. Her first job in the Galapagos was on board a 90-passenger cruise ship as the cruise director’s assistant, and she fell under the spell of the Enchanted Isles. She returned to Guayaquil to study at the Espiritu Santo Technological University to obtain a degree in Tourism Management. Her fascination for the islands was still strong so, after finishing her studies, Gaby took the opportunity to join the Naturalist Guide’s course, jointly organized by the Galapagos National Park Service and the Charles Darwin Research Station. That was back in 1992, and she has been a naturalist since, keeping her deep love and passion for the islands during all these years.