At Sea, from Senegal to Western Sahara 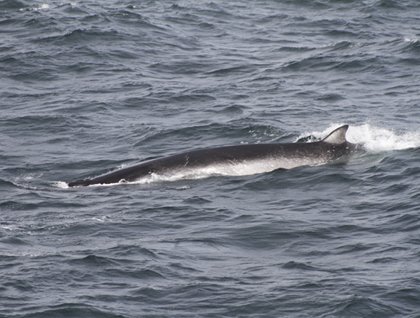 A day at sea anywhere is always filled with the potential for sighting wildlife, but in many cases the animals we search for are patchy in their distribution and rarely conspicuously abundant. And as we departed Dakar yesterday and headed north we were also aware that we were travelling through a region where there is relatively little known about the occurrence of some species that are infrequently observed.

A close inspection of the chart mapping our route revealed a notation from a previous transit through this region in 2012 which indicated that there had been good whale watching that day. But what were the chances of a repeat occurrence? It appeared to have been at a random location in the Atlantic Ocean, in over 2,000 meters of water with no indication of interesting bathymetry or some other feature that might prove to be attractive to whales, or their food.

As we made our way north, there were occasional sightings of groups of dolphins and occasional distant whale blows. And then as we approached the point on the chart things changed. Single blows became multiple blows, and it soon became apparent that we had once more found a significant concentration of whales. Closer inspection revealed them to be sei whales, a species with a poorly known distribution off the coast of West Africa. Our previous transits of the region in 2011 and 2102 had produced sightings of this species which were of interest to researchers, and now we had added another data point to the previous observations. And the location was a mere 20 miles from where the note on the chart indicated success 12 months ago (see the daily expedition report for National Geographic Explorer from April 22, 2012).

Richard was born and grew up near Portsmouth on the south coast of England.  An avid birder from an early age, he soon developed an interest in other areas of natural history, although birds remain his primary interest.  Despite being told that bird watching was not a 'proper’ job, he always wanted to turn his hobby into a career.  After graduating from Plymouth with a degree in biological sciences he started work researching the impact of oil and gas exploration on seabird populations, initially in European waters and then in waters around the Falkland Islands, where he lived for three years.