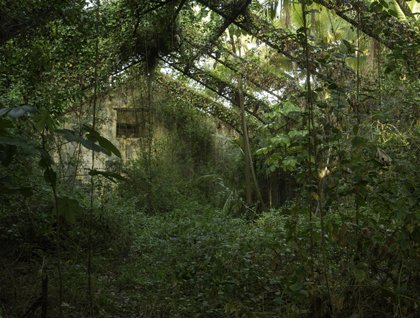 Ruins of prison on Ile Royale.

Ruins of prison on Ile Royale.

Today we arrived at the last of our easterly sequence of the three Guianas, finding ourselves in French territory. And how immediately obvious that always is: here we were served delicious tartes aux pommes by elegant young ladies who poured good strong coffee with a chaser of Perrier frappé. In La France Outre Mer, it is always the metropolitan culture that dominates, tartes aux pommes as though we were in Normandy and not on a tropical island with an abundance of fruits, save for apples. The local music too, played on board by Chris Combette and his band, might have come straight from Paris; indeed rumors have it that it did just that!

The name Guyana (or Guiana) is the Amerindian name for the entire territory, meaning land of rivers—a “Wild Coast” as the Dutch called it—carved up and fought over by the three colonial powers in question (Britain, Holland, France) for its value as a location for sugar plantations that operated at huge profit on the basis of slave labor. Not until the twenty-first century did any of the three Guianas have a road connection to the rest of South America. Their populations lived predominately on the coastal littoral and were oriented culturally to the Caribbean.

Our visit to French Guiana was in fact not to the mainland at all but to the archipelago of Les Iles Salut, a name freighted with irony given the archipelago’s role in colonial history. The “Salvation Islands” consist of L’Ile Royale (some 28 hectares), Joseph (20 hectares) and Diable (14 hectares), the latter infamous as Devil’s Island, a prison destination to which France’s most notorious political prisoners were dispatched to end their days in solitary confinement. Damnation rather than salvation, then, and the same went for the larger prison that operated on Royale for nearly a century from the 1860s to the 1950s. We toured the evocative prison blocks, hospital and cemeteries, pausing for coffee and cakes at the verandah overlooking Devil’s Island. It was also possible for guests to visit the neighboring island of Joseph by Zodiac

Devil’s Island is famous for several of its prisoners: Henri Charriėre, of course, the subject of the movie Papillon but most famously Capt. Alfred Dreyfus, the Jewish army officer falsely accused of treason in 1895. His case was courageously taken up in Paris by the novelist Emile Zola who wrote the famous open letter to the President of the Republic: J’accuse. Dreyfus was repatriated to France the following year; eventually to be released but the issue of anti-semitism ran on in Europe, with Zionism as its foil, for over a generation with devastating consequences. Devil’s Island, an apparently idyllic tropical island, has a disturbing past.

David studied history at the University of York in England and theology at the University of Wales. Research in the field of religious history (at Cardiff) followed on naturally. He has spent most of his professional life teaching history, most recently in adult education departments within the University of Wales where he has taught a wide variety of courses pertinent to the wider Atlantic world. In 1988, he made his first lecture-tour of the U.S. for the English Speaking Union. He has published extensively on Welsh history and topography–his most recent book being the Companion Guide to Wales (2005)–and is a frequent contributor of articles and reviews to Welsh cultural and literary journals. In the1990s, David was active in the field of international education, traveling worldwide and spending a year in the U.S. (in Atlanta and New York City). He speaks English and French in addition to his native Welsh.

David has worked for Lindblad Expeditions-National Geographic since 1993 on six continents and in over 65 countries. David is interested in many of the natural sciences, particularly ornithology, geology and marine biology; he most enjoys contrasting the broad perspectives provided by world travel with detailed investigations of local ecosystems on land and in the sea.