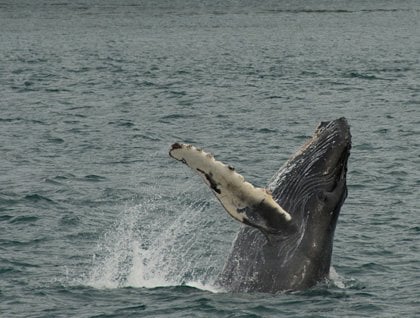 Wow! What a day! It's hard to cram as much wildlife into one day as we did today. The morning began rather inauspiciously, low clouds clinging to the forested mountain slopes and light drizzle sprinkling the sea. A couple renegade otters were spotted before breakfast, giving a prelude to what the day would bring.

Morning operations centered on Fox Creek, a small stream surrounded by abundant brown bear signs. Groups split into photographers and natural history folk, and proceeded to explore bear trails, bear rub trees, bear skeletons, bear food and bear habitat. No bears, however, were seen on the premises. Next came a round of kayaking, which proved to be incredibly popular. Guests paddled in single and double kayaks, delighted by the life floating and swimming beneath.

In the afternoon we visited the Inian Islands with our expedition landing craft. Informally known as "the Serengeti of Southeast Alaska,” the Inians lived up to their reputation with gusto. Humpback whales circled the boats, feeding on a plethora of small fish, diving and blowing near and far. Sea lions roared from the rocks and swam around us, eyeballing us with curiosity as they beat their dinner against the water's surface to break it into bite-sized chunks. Puffins buzzed us, an overwhelming number of bald eagles were draped in the trees, and a few sea otters made a brief appearance.

A humpback whale calf entertained us up until dinner with prolific breaching, and a delicious meal was chased down by an undersea video by Paul North and Lee Moll's presentation on glaciers.

Emily grew up in Boulder, Colorado and Pullman, Washington. Her love of nature began as a child during family vacations spent hiking, camping and exploring the mountains and deserts of the west. In contrast to her outdoors interests, Emily pursued an intensive young career as a classical violinist, culminating in degrees in history and music performance at the University of Washington.