At Sea, Underway to Rio 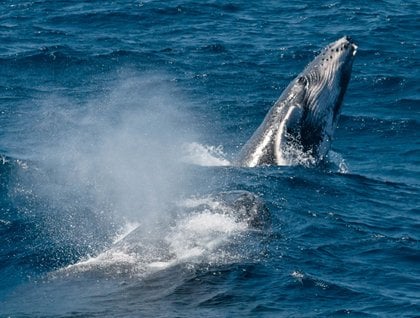 Humpback mother and calf at play. 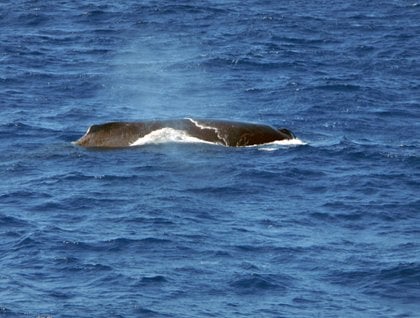 Humpback mother and calf at play.

Today we enjoyed a relaxed day at sea after our very active days in Salvador and Ilheus. It provided us a chance to catch up on our photographs and to hear some very interesting presentations from some of the experts on board.

As we sailed along the coast of Brazil we enjoyed seeing masked boobies diving after flying fish, which take off as the ship passes. The red-footed boobies we had seen in previous days try to take the flying fish on the wind while masked boobies prefer to dive after the fish once they return to the water after their flight.

Our primary destination today was the Rochas Abrolhos, a region of shallow coral reefs offshore of the Brazilian states of Bahia and Espiritu Santo. The name means “open your eyes” in reference to the many rocks and coral pinnacles in the shallow area. The area comprises a mosaic of marine and coastal ecosystems and encompasses the largest reef area and the highest marine biodiversity in the South Atlantic. Currently efforts are underway to expand the current limited coverage of Marine Protected Areas (MPAs) within the region by creating a buffer zone around the entire offshore area. The area is used by artisanal fishermen, but it may also hold oil and gas reserves and if these are to be developed, the biological resources need to be protected.

We came to the area, however, primarily because it is a site where we have often seen humpback whales in the past. This South Atlantic population mates and calves in the warm waters of the Abrolhos Region and then migrates south to Antarctic waters during the austral summer to feed on the rich waters there. We were certainly not disappointed as we soon encountered a female with a very young calf which breached and rolled around on its mother’s back. There were other adults in the area as well and we watched them for quite some time before moving on to another large group of adults engaged in the competitive mating displays of humpbacks where the males compete for access to females by fighting with one another while they try to achieve the favored “escort position” on the females port quarter. After watching these interesting behaviors we sailed on toward Rio de Janeiro.

Doug Gualtieri has worked as a Naturalist interpretive guide for over 20 years, beginning his career in Denali National Park and Preserve at a remote wilderness lodge leading hikes and giving lectures on the ecology and wildlife of that region. Later he began leading Lindblad Expeditions land extensions to Denali in 2002 and has worked with Lindblad in some form or another ever since. With a background in Biology and a lifelong passion for the natural world Doug moved to Talkeetna, Alaska in 1999 from his home state of Michigan, and never looked back.

Eric began his life on the far western edge of Chicago, where the concrete meets the cornfields.  His inspiration has always drawn from the expansive beauty of the natural world, as well as the endless forms that populate it.