At Sea Off Central Brazil 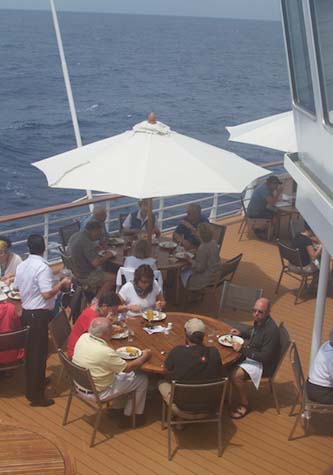 Pleasant and relaxing lunch on the sundeck off the coast of central Brazil.

Days at sea allow one to catch up on life and reflect on where one is and what one has recently done. On the National Geographic Explorer it is also a time to learn. Everyone aboard has come to not only experience a particular piece of our world but also to be enlightened about various aspects of a location different from where we live.

The day was filled with activities to educate and enlighten us about the region we are visiting. First on the agenda was Doug Gualtieri giving a very pertinent talk titled “ Mata Atlantic or the Atlantic Rain Forest: The Forgotten Forest.” Very few guests admitted that before this voyage they had not even heard of this unique environment.   Doug eloquently told us about the importance and uniqueness of this endangered environment. Originally stretching in a narrow swath from about Salvador south to southern Brazil and touching neighboring countries in the south, the forest over the last 50 years or so has been reduced to just a fraction of its size. Agriculture and urban expansion has severely fragmented and degraded the Atlantic rain forest. This environment’s uniqueness includes many species of organisms endemic or only found here, some of which are extremely endangered. And it has some of the highest biodiversity of anywhere; there are places with close to 500 individual species of trees per hectare. Fortunately conservation efforts are protecting some significant remains of the Mata Atlantica.

We also heard from our Global Perspective Guest Speaker, Alberto Pfeifer, on the status of the economics and politics of Brazil. We learned many facts about this extremely important South American giant. With over 200 million people the country has been in a position to influence the economy of not only South America but the world. However, most recently this emerging and economically expanding country has faltered with a slowdown in its prosperity. At this moment the outcome of the national elections will determine how it goes ahead.

The midday weather was perfect for lunch on deck. Light winds from the north were pushing us along gently and a warm comfortable temperature suggested to the galley and hotel department to produce an enjoyable deck atmosphere for lunch, which many people took advantage of to relax and converse about the days of travel and the anticipation of activities to come.

The afternoon brought a photo session by the photo instructors and National Geographic photographer, Kike Calvo. A number of guests contributed photos they had recently taken as examples to be critiqued and discussed. This was definitely a learning exercise for everyone.

In the late afternoon we then heard of the unique work of National Geographic Emerging Explorer T.H. Culhane. Biofuels could be one important alternative of the future. T.H. stressed how waste we produce daily could be simply and easily turned into minimally polluting gas. Definitely a relatively inexpensive process that has yet to catch the major interest of the world, but it could and should come to the forefront.

Following dinner we then heard from musicologist Jacob Edgar about aspects of world rhythms.

Definitely a day full of new insights into the world and that is what it means to travel on the National Geographic Explorer.

Bud received an undergraduate degree in wildlife biology at Colorado State University. He then immediately went to Alaska where he worked and lived for 30 years. At the University of Alaska, Fairbanks, Bud studied wildlife biology and received a master's degree conducting research on four species of alcid seabird nesting on a remote island in the Gulf of Alaska.