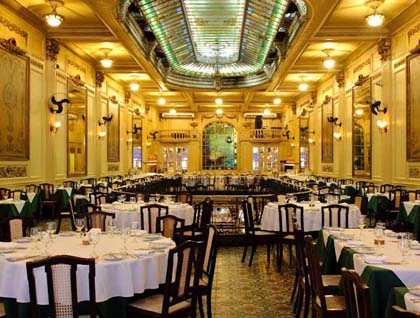 The early risers were on deck at first light to experience arriving in Rio from the sea. They were rewarded with partly cloudy skies and the morning mist to move past Sugar Loaf Mountain into Guanabara Bay and, a bit later, seeing Corcovado with the famous Christ the Redeemer Statue. Alas, or perhaps not, both Sugar Loaf and Corcovado were partly covered by clouds. But we saw the Rio-Niteroi Ferries crossing the bay and then heard the roar of the 737s and the “Ponte Aerea,” or shuttle flights, between Sao Paulo and Rio starting at 6:00 a.m. In the north part of the bay one saw the many cargo ships and the traffic on the Rio-Niteroi Bridge. The “Magnificent City” or “Cidade Maravilhosa” then was opened to us.

Of the various options, one group visited the Golden Lion Tamarin reserve and was rewarded with some spectacular close-up views and good photos of this endangered species. Many of us took the Corcovado excursion. We climbed through the Tijuca Forest on the old rail cog train (seeing the “jaca” fruit trees and some saw small monkeys) with five short stops before the top of the mountain. Bathed in clouds and mist, the Christ figure became visible to all and we got an occasional view of panoramic Rio below.

And in the afternoon we had a fun trip to Sugar Loaf Mountain. The cable car took us first to Urca Mountain (where we saw several Marmosets scrambling for morsels falling from the tables in the café) and then the ride on up to Sugar Loaf in the modern, glass-enclosed cable car. The view from the top is unparalleled – the crescent of Copacabana to the left, the Christ statue in front of us beyond Botafogo Bay and the yacht club, and Flamengo Beach and Santos Dumont Airport to the right. Downtown Rio with its skyscrapers is in the distance a bit beyond.

That evening there was a terrific evening set up by Musicologist Jacob Edgar at the Scenarium Nightclub in the old Lapa section of Rio. The atmosphere of contemporary Rio night life surrounded us as we walked through the crowded streets of Lapa, the cafes and bars brimming full of “Cariocas” out on a night on the town. Songstress Teresina Cristina entertained us with cool samba and all danced and enjoyed that Brazilian favorite cocktail the “Caipirinha.” So ended the first busy day in Rio and we looked forward to a second day as fun as the first.