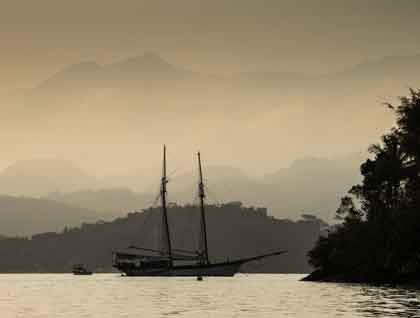 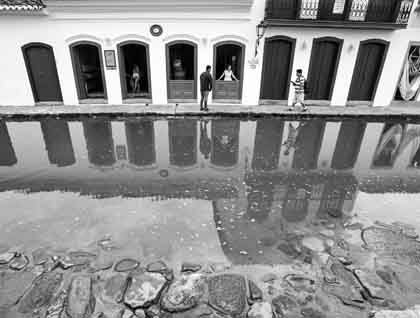 Early morning cloud cover was clearing quickly as we approached our anchorage early this morning, the evocative old town of Paraty already preparing for a festive weekend ahead, its party-boat crews and store owners all in readiness for business. Our long Zodiac approach through the calm sub-tropical waters of this island-studded coast brought us to a perfectly preserved eighteenth-century colonial town with cobbled streets and low rise buildings, all in an excellent state of preservation as befits a town with UNESCO World Heritage status. It looks and feels as though the Portuguese colonizers left yesterday. An intriguing feature is that the main streets are concave and cleansed each day by the in-coming tide, a spectacle we were able to witness at noon today. Our historical walking tours visited a number of key buildings, including churches, art exhibitions, and a culinary emporium, the latter offering cachaça tastings including one infused in clove and cinnamon named Gabriela, inspired by the work of the national literary hero Jorge Amado. The Casa da Cultura had a number of interesting exhibits made by local artists.

The shallow bay was initially chosen because it afforded a measure of protection to the local carrying trade of the Portuguese who used the port of Paraty to export gold and diamonds from their mines in the hinterland of Minais Gerais up the coast to Rio de Janeiro for onward transfer to Lisbon. Especially evocative of a world we have lost is a restored segment of the Estrada Real, the former highway linking the port with the inland mines. The seventeenth-century road surface is wonderfully preserved and the trail affords magnificent views of the mountains, rain forest, and the ocean. Brightly-colored birds, of which the red-necked tanager proved a favorite, along with butterflies that were plentiful, especially in the vicinity of Poço de Tarzan, a magnificent waterfall with associated pools that were popular with locals relaxing on the weekend. A relaxing afternoon on the beach or a chance to spend time in the stylish local cafés rounded off a relaxing but interesting day.

David studied history at the University of York in England and theology at the University of Wales. Research in the field of religious history (at Cardiff) followed on naturally. He has spent most of his professional life teaching history, most recently in adult education departments within the University of Wales where he has taught a wide variety of courses pertinent to the wider Atlantic world. In 1988, he made his first lecture-tour of the U.S. for the English Speaking Union. He has published extensively on Welsh history and topography–his most recent book being the Companion Guide to Wales (2005)–and is a frequent contributor of articles and reviews to Welsh cultural and literary journals. In the1990s, David was active in the field of international education, traveling worldwide and spending a year in the U.S. (in Atlanta and New York City). He speaks English and French in addition to his native Welsh.

Eric began work with Lindblad Expeditions-National Geographic in 2006 as a means to see the world, work with great photographers and engage his environmental studies degree beyond the classroom. His initial years with the company were spent working the waters of Southeast Alaska and Baja California. His move to the National Geographic Explorer in 2008 helped earn him the experience and knowledge needed to establish himself as a trusted boat handler, naturalist and respected photographer in nearly all the environments Lindblad-National Geographic travels.