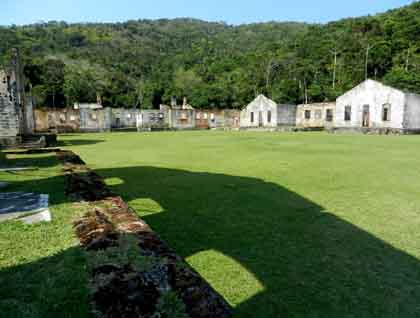 The prison compound (with an impatient forest waiting to break in). 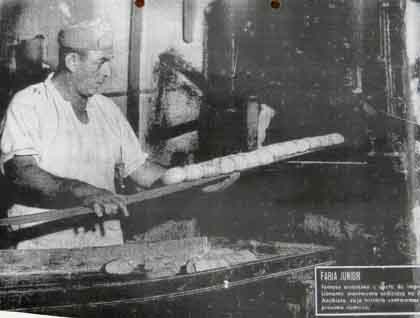 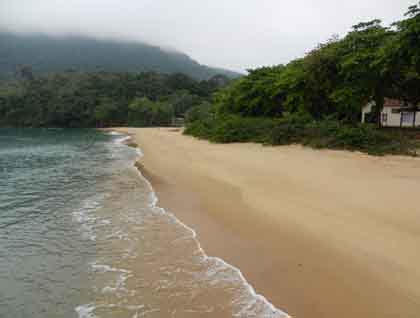 The golden beaches of Anchieta.

Through the night we sailed south down the coast from Rio, and turned our clocks forward an hour. First light revealed the silhouette of a densely forested island, Ilha Anchieta, with its own dark history. If we turn the clock back 500 years, no one lived here except the native Guarani-Yupi Indians, who fished and foraged in a pristine forest. Then the Portuguese arrived, came ashore and made a treaty with the Indians, promising to live peacefully alongside. Inevitably over the decades more and more Portuguese arrived, displacing the Indians from their forest home.

Turn the clock back a century, when the new authorities decided that this lovely place was perfect for a penal colony, small, isolated, 25 miles from the mainland. The prison buildings are the first things to be seen once ashore at the small concrete pier. Led by a guide into the central square, we are ringed by roofless buildings, the windows still gridded with rusting iron bars. We see the washrooms, the bakery (with an old picture of Favia Junior, just one of the “dangerous criminals” incarcerated here, busy baking bread rolls), and solitary confinement cells. Delight turned to laughter when we discovered that the inmates also included a few dangerous politicians, inviting proposals of several candidates today who are more than eligible!

Turn the clock back 60 years and the prisoners organized a well-planned rebellion, led by Portuga, a criminal who had escaped from all previous incarcerations. Four hundred prisoners overpowered the warders, including Favia Junior who killed eight of them, but the meticulous plan went awry when they discovered beer in the warders’ houses. But Portuga made it out—he braved the shark-infested waters to swim to the mainland. Two 70-year-old locals who were children on the island at the time of the breakout gave us a vivid firsthand account of the event, the biggest bungled breakout in Brazilian prison history.

Turn the clock back 40 years, and wise men agreed Anchieta should become a National Park. The beauty of working with nature is that time heals everything: birds now nest in the prison walls, the camp is overshadowed by tall forest trees full of epiphytes and hummingbirds, the reef is full of fish and sea turtles, and the forest is reclaiming its own. The birders headed deep into the woods and came back with sightings of special birds like the hooded tanager, plus capybaras, agoutis, South American opossum, and black-faced marmosets. Others were led on beach walks under tall Indian almond trees festooned with bromeliads, vines, and creepers. The golden beaches proved irresistible for some: by 10 a.m. it was so hot several took a dip in the sea. For Anchieta, where once prisoners plotted to break out, the native forest outside the prison walls waits patiently for the chance to break in….Turn the clock forward another 50 years, and this will be one of the jewels of the Brazilian coast, where visitors come to reflect on dark deeds of the past, and revel in the glories of a healed coastal forest, the Mata Atlantica.

During an afternoon at sea we had a special treat on the aft deck, a concert organized by Jacob Edgar, our musical guru, introducing a talented young Brazilian singer, Luisa Maita with her band. I think we will be hearing more of this artist, whose lyrical songs capture the rites and rhythms of modern Brazil.

Ian Bullock is a British biologist who lives in St. Davids, Pembrokeshire, on the south-western seaboard of Wales. He grew up in Cambridge but was always drawn to the rugged cliffs of the west coast, from childhood seaside holidays in Cornwall to his university training as a zoologist in Bangor, North Wales.