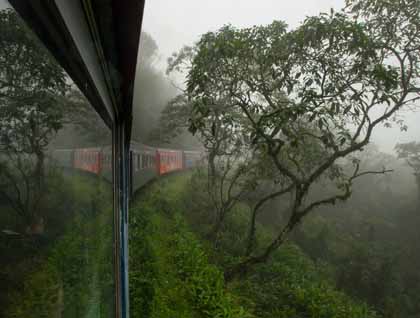 The Serra Verde Express train winding it's way through the Atlantic forest. 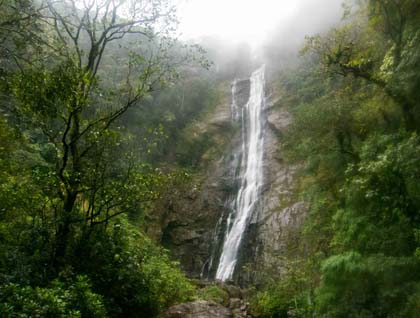 The Salto Morato waterfall in the Atlantic forest. Photo by Doug Gualtieri.

Somewhere in the course of the evening National Geographic Explorer passed out of tropics, but just barely. Paranagua lies roughly at 26º south, we began our expedition in Salvador at 13º south latitude so far having sailed nearly 800 nautical miles of Brazil's coastline. This is of significance because the Atlantic forest ecosystem, with the richest biodiversity on Earth, spans that same 800 miles with another 600 more miles lying north of Salvador. Prior to Portuguese colonizing these shores in the 16th century the Atlantic Forest covered over 1.25 million square kilometers now, sadly, less than 100,000 square kilometers remain intact. Of that remaining forest, 99% exists in very small fragments of less than ½ km². Today our time in Paranagua and the surrounding area will be our last day exploring the Atlantic forest as we sail further south the climate and ecosystems transition from coastal forests to the flat and expansive pampas of southeastern Brazil.

One of our outings today traveled to the capital of Parana State, Curitiba, situated in the middle of the Serra do Mar mountains, where we boarded the Serra Verde Express train to Morretes. The train winds through the spectacular mountainside terrain with much of the slopes and adjacent hills harboring the remnants of the Atlantic forest. The day was a rather rainy day but even with that the breathtaking scenery and exceptionally lush rain forest were a real highlight. As the train passed through the forest, a channel-billed toucan was spotted perched in a tree adjacent to the railway. Upon the arrival in Morretes a fandango show was performed and the guests experienced the traditional meal of barreado. A brief time to explore the town of Morretes before departing back to Paranagua and returning to the ship.

A much smaller faction of explorers set out for a more intimate experience in the Atlantic forest, one where all senses were stimulated by this magnificent ecosystem. The heavy clouds clinging to the Serra do Mar mountains foretold of a true rain forest experience ahead of us. This however didn't deter us and in fact added such an important element to the outing to grasp the true value of the rain to the forest system. We set out from Paranagua in a speedboat to cross the massive estuarine system of mango forests and islands to the coastal fishing community of Guaraqueçaba. Arriving there we took a short bus ride into the Reserva Natural Salto Morato where we were to spend the next few hours hiking, bird watching, and soaking in the forest sounds and sites. By the time we had reached the visitor center to start our hike the rain began to fall in earnest, the heavy drops percolating through the canopy falling on the large fan leafs of the understory made for a wonderful soundtrack, mixed in with the occasional bird call and singing forest frogs. The director of the reserve had told us that it had been over a week since any significant rainfall and that he was pleased to see the forest getting the much needed dowsing.

Salto Morato is an idyllic and picturesque waterfall surrounded by primary and secondary Atlantic forest. The preserve that gets its name from this waterfall is over 2,500 hectares and is comprised of nearly 75% primary forest, making it one of the largest pieces of primary forest left in all of the Atlantic forest. As we neared the waterfall the rain began to dissipate leaving the lush forest refreshed and rejuvenated. The waterfall plunges some 500m from top to bottom and feeds the stream that winds its way through the forest. Our return trip on the forest trail was soon punctuated with the feverish activity of many species of birds taking advantage of the break in the rain. In total we observed over 50 species of birds in the few short hours we were there. Our time spent here would be the last of our time in the Atlantic forest and a more than fitting finale to what has been an incredible exploration of one of the worlds most diverse and significant forest ecosystems.

Doug Gualtieri has worked as a Naturalist interpretive guide for over 20 years, beginning his career in Denali National Park and Preserve at a remote wilderness lodge leading hikes and giving lectures on the ecology and wildlife of that region. Later he began leading Lindblad Expeditions land extensions to Denali in 2002 and has worked with Lindblad in some form or another ever since. With a background in Biology and a lifelong passion for the natural world Doug moved to Talkeetna, Alaska in 1999 from his home state of Michigan, and never looked back.

Eric began work with Lindblad Expeditions-National Geographic in 2006 as a means to see the world, work with great photographers and engage his environmental studies degree beyond the classroom. His initial years with the company were spent working the waters of Southeast Alaska and Baja California. His move to the National Geographic Explorer in 2008 helped earn him the experience and knowledge needed to establish himself as a trusted boat handler, naturalist and respected photographer in nearly all the environments Lindblad-National Geographic travels.