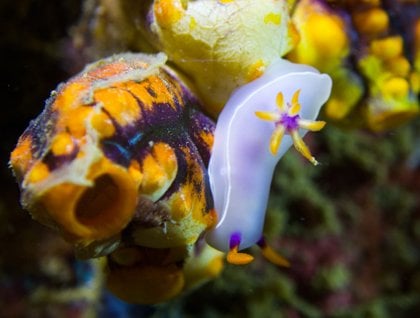 Nudibranch on a tunicate. 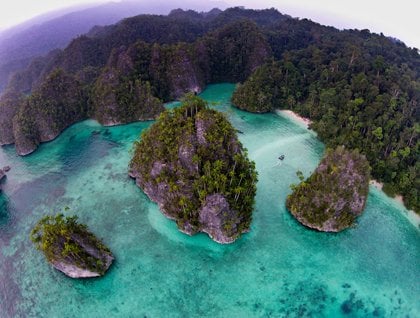 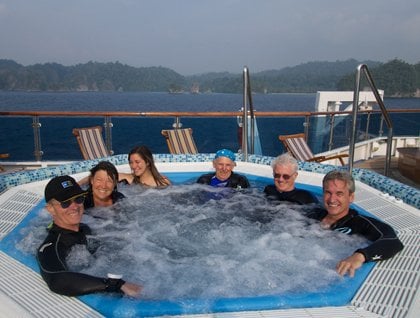 Triton Bay is a small bay on the west side of the island of New Guinea, in the southern end of the peninsula known as the Bird’s Head. This area was first “discovered” by the famous explorer Sir Thomas Ritchieford sometime around 1832. It was not scientifically investigated until 2006, and what results did they find! On the first expedition of scientists, at least 14 new species of fish were discovered, and 330 species of reef fish were found on one dive site alone. That is amongst the highest in the world!

Around lunch time we entered another world. Triton Bay is a stunning landscape filled with karst topography. Towering limestone pillars are undercut by the hard work of various invertebrates, making for an incredibly photogenic setting. Here, we first explored the undersea world.  Whether it was by SCUBA, snorkel, or glass-bottom boat, we all enjoyed the great diversity underwater. Then, we took to our fleet of Zodiacs to snake our way through the many small passages amongst the stunning seascape. Around every turn, another incredible vista was to be seen.

To end the day, some of us went for a night dive. This is the time when some of the strange creatures of the ocean come out. As we entered the water, we were instantly in a massive swarm of jellyfish. It was mesmerizing watching them pulse and dance, and luckily they were “mostly” stingless. From there, the discoveries continued. Nudibranchs, flatworms, lionfish, pipefish, and eels were some of the gems we encountered.

As we surfaced to end the day, the sparkling glow of the bioluminescence underwater mirrored the stars overhead in Triton Bay.

Mike learned early on that the best way to escape Ohio was to become a marine biologist.  During college at Wittenberg University he attended a semester at Duke University's Marine Lab — that time only confirmed his love for all things oceanic and maritime.  After graduation, Mike promptly moved to Catalina Island in California where he taught marine biology to school kids.  Since 1999, Mike has been working and traveling chasing his three loves: marine critters, photography, and birds.