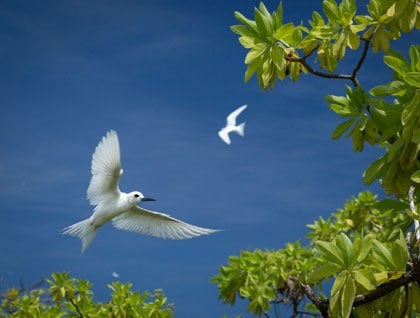 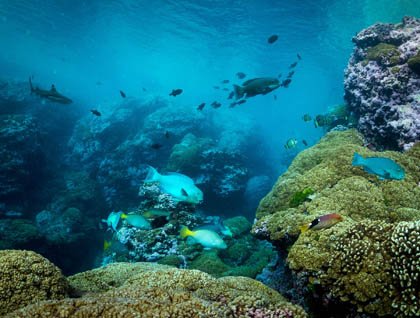 It was the rarest of days. We had traveled far to a little-known island residing in a forgotten part of the great Pacific Ocean. This remote atoll was first officially “discovered” by Europeans in 1606 – prior to European navigators finding Tahiti or Hawaii – and after numerous subsequent sightings and proffered names, she was given the name of “Caroline.” Sailing routes across the Pacific changed as navigator’s rhumb lines moved to new destinations, leaving Caroline Atoll and her surrounding waters essentially alone.

During the 1800s and early 1900s, people attempted economic enterprises here; raising livestock, harvesting guano, and coconut plantations for copra. All of these ventures dissolved, and Caroline Atoll returned to being uninhabited for many decades. Today, tropical seabirds thrive here, the atoll’s native vegetation has remained largely intact, and the region’s remoteness has spared it from large scale commercial fishing. This atoll now belongs to the nation of Kiribati which elected to move the International Date Line eastward to encompass Caroline Atoll. With the dawning of the year 2000 they renamed it as “Millennium Atoll.”

With great anticipation we headed off by Zodiac through “Blind Passage,” the only navigable route into the atoll’s inner lagoon. This morning we took our time, stopping first on South Island to find coconut crabs and a monument commemorating the dawning of the new Millennium. We then wove our way around coral patches across the lagoon. At Motu Ana Ana we encountered a lone French sailor named “Lyderic” who has camped here for several years accumulating piles of flotsam from the atoll’s wild shores. Inland through thick brush we found the remains of a once elaborate wooden hut where a family named Falconer had lived alone for four years in the late 1980s like a modern Swiss Family Robinson. Overhead, dozens of white terns and noddies fluttered above the trees. On adjacent motus, red-footed boobies and great frigatebirds were actively nesting. Of special interest were sightings of blue-gray noddies, and also bristle-thighed curlews which are masters of transoceanic migration.

We made a final stop to explore the underwater world of the lagoon which is known for its incredible density of Tridacna, the colorful giant clams. After several adventurous hours, we returned southward across the dazzling blue-green waters of the lagoon to the open ocean where our ship was waiting.

We repositioned the ship to the south end of the atoll for lunch. The galley’s outdoor buffet is always an anticipated event, offering us a luscious array of foods with many tempting desserts. Today the ocean offered up its own delights as a group of beaked whales surfaced a few hundred meters aft of the ship. We all jumped to our feet for a view. In tune with this mysterious place, this turned out to be an extremely rare sighting of several Longman’s beaked whales, one of the least known species of cetacean on earth. As recently as the late 1990s this species was only known from two skulls that had been found. Since then, these whales have only been sighted a handful of times at sea.

The afternoon lured us underwater to explore Millennium’s outer reefs where we found an astounding array of marine life, including lots of big fish and plentiful sharks. Deep fissures had eroded the fringing reef, presenting us with mesmerizing submarine chasms swirling with Achilles tangs, parrotfish sporting colorful rainbow hues, and hundreds of black durgon triggerfish. Brightly colored butterfly fish flitted over the corals, passing enormous snappers, up to a meter long, gazing at us curiously with toothy scowls. Green sea turtles paddled gracefully beneath us, and the masters of the reef, blacktip and gray reef sharks, glided silently past us time and again.

Millennium Atoll now resides on the cusp of the International Date Line, an isolated island leading the planet into tomorrow. Viewing these pristine reefs – now protected as a marine reserve – gives us hope that Millennium Atoll’s future will continue to look like this vibrant thriving ocean from the past.

Jack is a Seattle-based guide, wildlife biologist and professional photographer. For the past thirty years his photographs have appeared in prominent magazines, calendars and books including publications by Smithsonian, Audubon, and National Geographic. He has co-authored a photographic book on Baja California, and also a photo identification guide to the killer whales of Southeast Alaska.