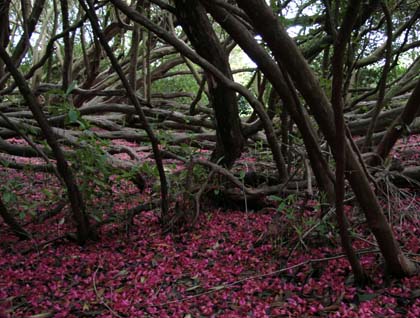 This morning National Geographic Explorer tucked into a protected inlet on Cornwall’s south coast, at the medieval town Fowey. Green hills reached the rocky shore. Homes around the harbor-side town were built close together, right near the high tide mark. At several locations around the periphery of the cozy inlet, steps and ramps lead to salt water.

In 1747, china clay was discovered in this district. It is used to make fine porcelain, and many other products including paint, toothpaste, and photo paper, and even cd’s. At one point there were 139 china clay mines in the area, with 6,000 people employed in the industry. Today about a dozen pits remain in use.

This morning we visited the site of an abandoned clay pit. The Eden Project was completed in 2001, and it consists of several large, insulated domes that are a sort of cross between giant, geodesic domes and greenhouses. One section houses a warm, humid tropical rain forest environment, while the other dome is a drier habitat, more typical of the Mediterranean. Each of the domes has thousands of live plants from regions of the planet that share similar environmental conditions.

Upon entering the domes, one immediately feels the unusual climate, and then realizes the scale of it all:  massive translucent domes overhead, thousands of plants tall and small, colorful flowers, textures, and plant shapes that are surprising. Walking paths curve up and around the domes, and along the way realizations are made about where favorite spices came from, how food plants originated, and creative displays encourage thought. How do we affect the environment? Why are rain forests (or Mediterranean plants) important? Why are they disappearing, what is being done and what can we do? The messages are of renewal, hope, and concern for these environments.

Our visit ended with a musical performance inside one of the domes. The sounds of the ensemble Baka Beyond honors the Baka Pygmies of New Guinea who have lived for millennia in close harmony with their rain forest home.

After lunch in a local restaurant, we explored the Lost Gardens of Heligan. The Tremayne family lived for over 400 years at Heligan, but the gardens went untended after all 23 gardeners were killed in WWI. Work began on restoring Heligan gardens 25 years ago, and once again 23 gardeners care for it. The rhododendrons are massive; some are tree-sized. They were all blooming. Beneath some of them, the dirt was carpeted with deep pink flowers—it was magical. The gardens are quite varied and include open formal gardens with pools, curving paths beneath towering trees, lovely antique greenhouses, orchards, large kitchen gardens, and views of the sea beyond rolling green fields. Along the woodland path, a huge female figure appears to sleep peacefully on the ground, with mosses and plants keeping her green as she slumbers.

Some people went for a strenuous six-mile walk in the afternoon. As they strolled on rolling hills, past sheep, cows, and abundant wildflowers, they had lovely views of creeks and the harbor below.

Berit grew up on the rocky shores of Marblehead, Massachusetts. In the tidal cove behind her family’s home she found horseshoe crabs, eels, and feeding frenzies of fishes and birds. Low tides exposed clam flats, crabs, mussels, and snails. She explored this marine environment through changing tides and seasons, nurturing a love of natural history and marine biology.