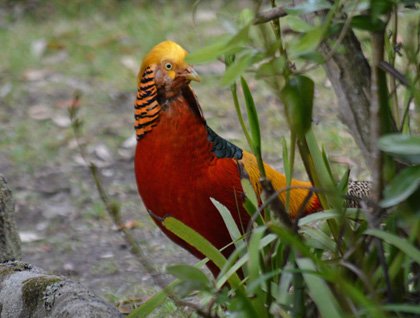 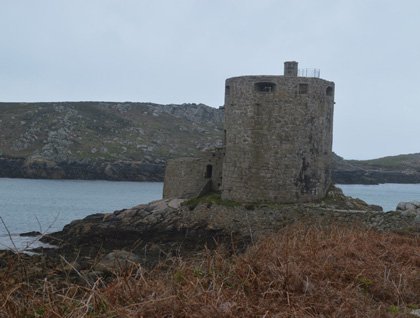 The white-capped tips on the waves of the Celtic Sea welcomed us to the Isles of Scilly. We navigated toward what seemed to be one large landmass, which as we approached, revealed itself as an archipelago composed of various sized islands and clusters of weathered granite rock that jutted out of the ocean. A visit to the Valhalla Museum later that day, with its collection of sea-wrecked figureheads, would allow us to understand the treacherous seafloor landscape which, within the last few thousand years, was part of the island above sea level.

After breakfast we boarded the skillfully driven Zodiacs and disembarked on Tresco Isle. The low-tide shoreline was gently blanketed by a layer of seaweed, which gave way to lichen-covered rocks and low lying grass that tightly hugged the mossy ground. We walked on winding paths, over rolling hills and through a gate that transported us to a tropical paradise; a secret garden of sorts. The Abbey Tresco Garden, purchased by Augustus Smith in 1832, was creatively designed utilizing the warm Gulf Stream currents. Yet, he protected the tropical plant growth from the salty air with a layer of tall, subtropical hedges and trees. While enjoying the palette of colors, perfumed scents, and brightly colored golden pheasants, we were greeted by one of the garden’s newest additions. The red squirrel. The red squirrel is native to Britain, yet it is estimated that there are less than 140,000 left as the American squirrel is growing in numbers. In an effort to increase the red squirrel population a collaborative program, which included the British Wildlife Centre, introduced several red squirrels to the gardens, where they are tended to daily and are increasing the population.

For lunch some guests decided to head back to the Zodiac landing to have their meal aboard National Geographic Explorer, while others ventured into the village of Tresco to dine at the Abby or several of the local pub eateries. Around two in the afternoon, guests were given the option to explore the small quaint village, hike to the ancient ruins up on the hillside with an archeologist, or meander through the outskirts of the town on a nature walk with a naturalist.

While some traveled on their own, a small group of us decided on the guided hike to the ruins led by archeologist Peter Wilson. We wanted to visit the castles that towered above the northern side of the island’s landscape.

We hiked through rugged terrain including fields of low lying mossy grasses, flowers, and wild brush interspersed with the rock several miles up towards the top of the promontory. We passed by scenic views of the ocean, the village down below, and watched sailboats pass through the once heavily fortified passage between Tresco and Bryher. Upon finally reaching our destination we rested a bit to take in the view of two castles that towered above the shoreline and the neighboring St. Mary’s Islands. We first toured King Charles castle constructed during the mid 16th century. Guests learned that due to the ensuing conflict between the parliament and King Charles, Sir Admiral Robert Blake was missioned to reconquer the island of Tresco for parliamentary control. On reestablishing dominance over the island, Sir. Robert Blake destroyed King Charles’ castle and used the stones to construct Cromwell’s castle located several hundred yards below. After exploration of the ancient ruins, guests traversed a narrow trail along the rugged coastline several miles back to the Zodiac landing to board the ship.

Around 6:15 p.m. we gathered in the lounge to hear our expedition guides share fascinating details about the locations explored during our time on the island. Doug enlightened guests with visual images of the connections between the Golden Pheasant, which was brought to the Isles from Asia during the Victorian Era, and fly fishing. Photographer Jim Richardson shared tales of famous shipwrecks and recanted the ill fate of Sir Admiral Cloudesley, whose figurehead washed ashore and is featured in the Valhalla museum. Jim explained the fascinating geology of the development of the Isles of Scilly.

As we were preparing to turn in for the night, it was announced that we were about to sail past the Bishop Rock Lighthouse. Guests rushed to the top deck to get a view of this spectacular part of maritime history. It was a great night for all.