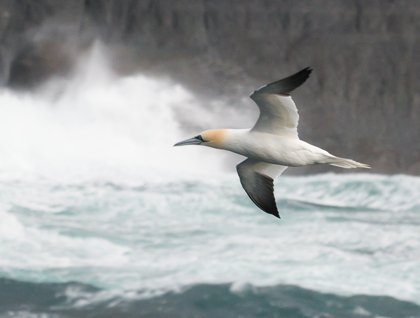 A Northern Gannet glides in front of the ship as we sailed by Little Skellig. 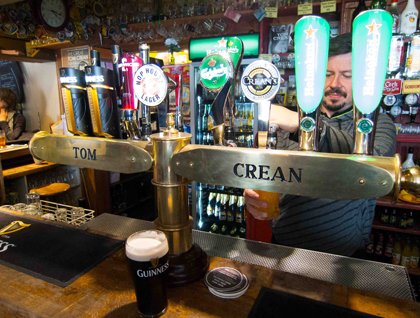 With a hardy swell rolling off our port bow this morning the National Geographic Explorer approached the desolate pinnacles of rock known as the Skellig Islands (Na Scealaga). Lying about 13 km off the Iveragh Peninsula in the County Kerry, Ireland these two islands hold significance in this region for two very different reasons.

Greater Skellig, or Skellig Michael, is comprised of two separate peaks topping out at 230 meters. It was once home to an early Christian monastery that dates back to between the 6th-7th century and was occupied for some 400 years. This reclusive and hermit-like order built several beehive huts out of the red sandstone that makes up these islands. Living off of seabirds like puffins and gannets and whatever they could catch from the sea and grow in their terraced plots, these monks represent today some of the earliest known Christian orders in this area. Today nearly 4,000 pairs of nesting Atlantic puffins call Skellig Michael home along with nesting storm petrels and manx shearwaters.

Lesser Skellig harbors a significant portions of the North Atlantic’s breeding Northern gannets. Gannets, relatives of boobies and belonging to the same order as pelicans, are seabirds that make their living in a most impressive way. Soaring over the water and peering downward searching for prey, fishes mainly, they fold their wings back, extend their long necks, and plunge at rocket-like speed into the water below. Reaching depths of several meters only to bob to the surface with the prey in their gular pouches. An estimated 30,000 pair of gannets call Little Skellig home, and as we approached swarms of them could be seen around the jagged cliffs and everywhere over the water with many individuals performing their most impressive dives into the windswept waters.

Having sailed into the waters of the Skelligs we officially arrived in Ireland, and this afternoon we will make our first landing on the Emerald Isle. We explored the sites situated around the Dingle Peninsula from ancient ruins to hiking in the Annascaul Valley. The landscape spreading out with ancient walls of stone defining the pasture lands and the highlands of the peninsula framing in the pastoral scene. A particular feature of interest for those of us who chose to see this magnificent landscape by foot was to stop off at the South Pole Inn, once owned by fabled Antarctic explorer, Tom Crean. This, combined with the exhilarating stroll through the countryside made for an exceptional introduction to Ireland.

Oh but wait, one more very special event was to take place back on board the ship after dinner. The renowned Irish performer, Sharon Shannon would give us a concert in the lounge on board our home, National Geographic Explorer. Pour another pint!

Doug’s passion for the natural world started at an early age in his home state of Michigan. He received two biology degrees from Central Michigan University, and later went on to get a master’s degree in conservation biology. His education led him to study a diverse range of natural sciences, with an emphasis on ecology, animal behavior, and migratory birds. Shortly after leaving the academic world, Doug migrated north to Alaska with his trusty Siberian husky, Koda. He began working as a naturalist in Denali National Park in 1999. For over seven years he has shared his love of Alaska and Denali’s six million acres with Lindblad Expeditions-National Geographic guests, as trip leader for the Denali Land Extension based at the North Face Lodge deep within the park.