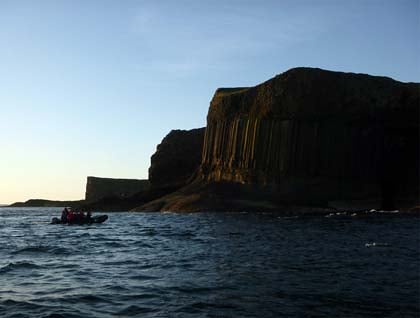 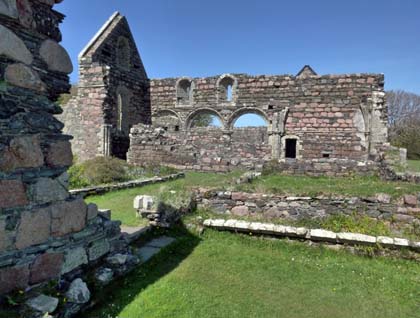 Despite waking to sunshine and clear skies, a strong easterly wind prevented us from making a landing on Staffa this morning. After rounding the island by ship, we proceeded slowly towards the isle of Iona. Our route was lined with stunning vistas of western Scotland’s dramatic cliffs in the harsh morning light. We cruised through the maze of islands and arrived in late morning to far more forgiving landing conditions, at our second destination. From the ship we could see the ruins of the island’s medieval monastic legacy peppered amongst the houses and shops of the small but lively little village, nestled beneath a green hill.

Once the ship had anchored, we took Zodiacs ashore. White sand beaches with crystal clear water under glaring sunlight created a look that felt more like the tropics than northwest Europe, though the blue of the water hinted at its cold. We first visited the ruins of the nunnery, just up from the shore. This is the best surviving ruin of a nunnery from this period in Britain, and the many phases of construction during its life create a patchwork of different styles and colours in the stonework. After contemplating this setting, it was time to proceed to the famous abbey. This was once the focal point of one of Europe’s most important religious communities, built on the site of St. Columba’s church.

We returned to the ship for dinner, but our day’s activities were not over yet. We took a chance on conditions having improved at Staffa and were rewarded several times over. The magnificent basalt columns were all the more special in the light of the setting sun, and enjoying them from both sea and land made for a perfect end to the day.

Peter comes from the town of Cobh, County Cork, on the south coast of Ireland. He is both a working archaeologist and a naturalist.  Growing up and living next to the sea, he developed a fascination with whales and dolphins, along with birds and the broader natural world. Ever varied in his interests, he studied English at University College Cork and went on to complete a master’s degree in Old English.

Eric began his life on the far western edge of Chicago, where the concrete meets the cornfields.  His inspiration has always drawn from the expansive beauty of the natural world, as well as the endless forms that populate it.