An undersea specialist for Lindblad Expeditions and the founder of Meet the Ocean, Paul North has been diving since his mid-20s when he headed to Honduras to swim with whale sharks. Two years later, he had his first introduction to cold waters when his former dive instructor and mentor invited him on a dive in Norway. “Those Norwegian waters were screaming with life and a great way to learn about the ecosystem,” he recalls. He quickly realized there were unexpected and harder-earned biological treasures in the polar regions, and has been diving the higher latitudes of our planet ever since.

Through his travels Paul began to realize that something needed to change. “It felt like everyone expects the ocean to be the same thing all the time—and I got the sense that the story could be told better and more vibrantly using today’s technology, to really shake the tree and get more people’s attention.”

So three years ago, Paul began organizing art shows in Portland, Oregon to highlight marine topics and the realities of what our ocean was facing. That first step would become the catalyst for Meet the Ocean, his educational nonprofit that increases appreciation and awareness for the planet’s oceans via a podcast series and educational programming. Drawing on his background in creative writing and theater, Paul and his team bring their message to schools and children’s hospitals, hoping to inspire and engage the next generation of ocean heroes.

The podcast recently hit a milestone—10,000 downloads—and the ocean education community has started to take notice. “We’re coming into this moment of momentum. We’re aiming to expand to four episodes a month including one full-length episode, our new Kids Talk episodes, and an Invertebrate of the Month, which will have associated art with it. In the long-term we’re looking to mix in more types of media, play with virtual reality, and bring it to the theater—I’m working with a composer on a plankton musical for kids.”

In honor of World Oceans Month, we asked Paul to share some of his favorite photos. Below are his thoughts on why they best portray what it means to Meet the Ocean. 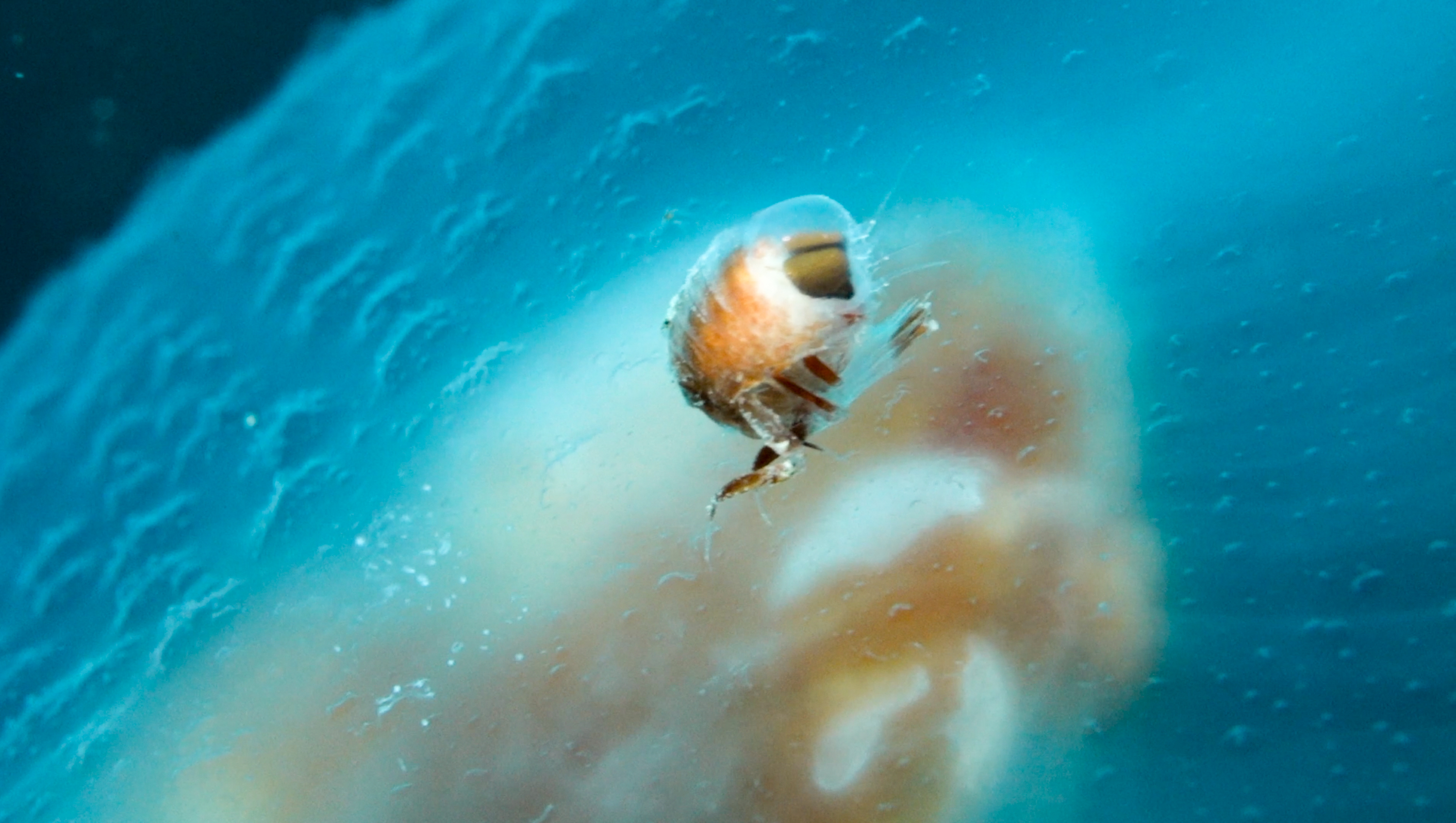 “Planktonic life is densely distributed in the Southern Ocean surrounding Antarctica, allowing an opportunity for this amphipod to hitch a ride on the back of an Antarctic jelly. Though the small life of the ocean is often outside our consideration, planktonic contribution is the engine of our oceans, the breath of our planet, and a majority contributor to our atmosphere.” 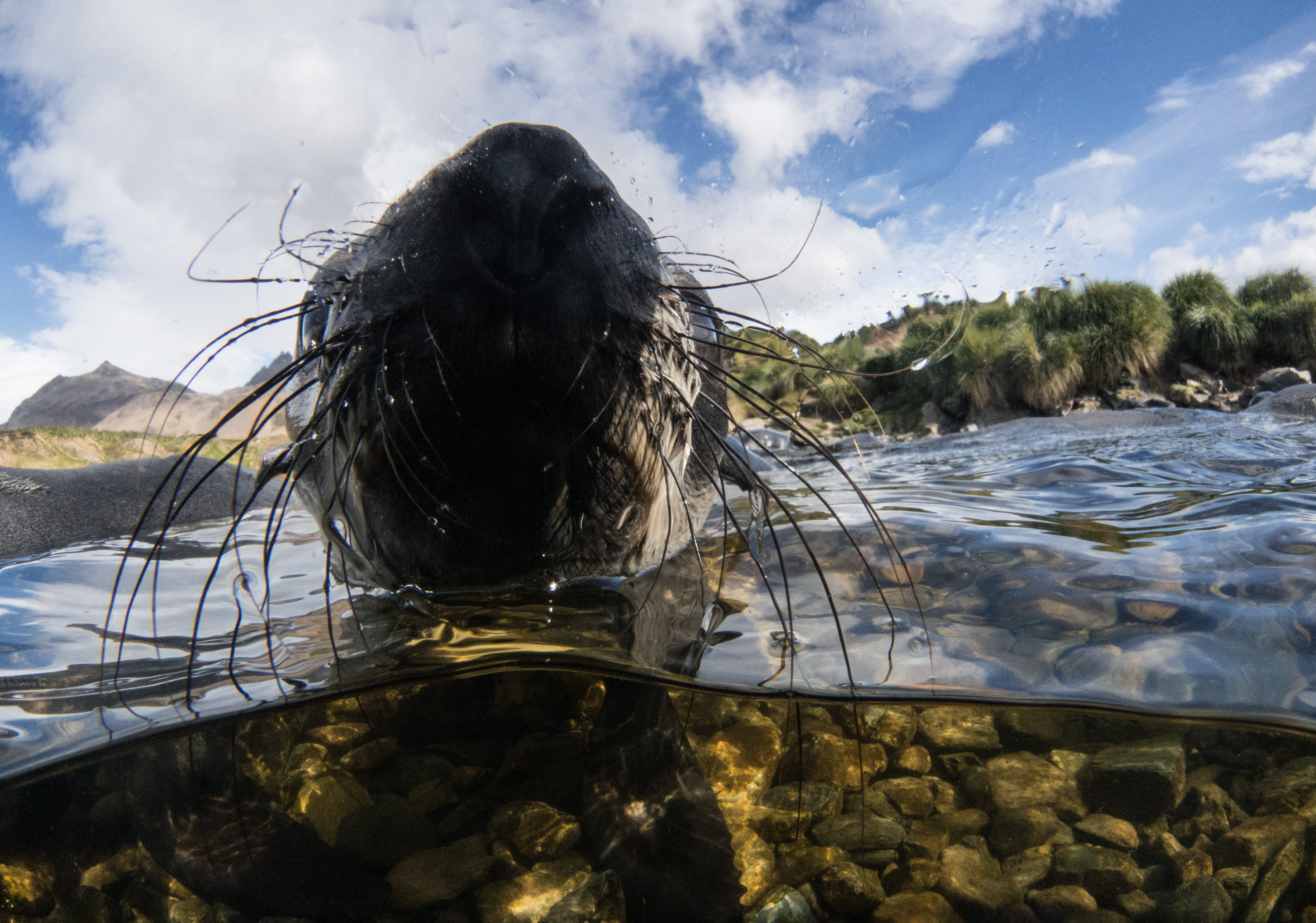 “The journey to South Georgia is often done in search of Shackleton and waist-high penguins, but upon arriving one discovers the Antarctic fur seals, and learns that curiosity is not a human invention. Our relationship with these creatures has changed from driving them toward extinction for trade, to studying them as a bio-indicators of the Southern Ocean ecosystem” 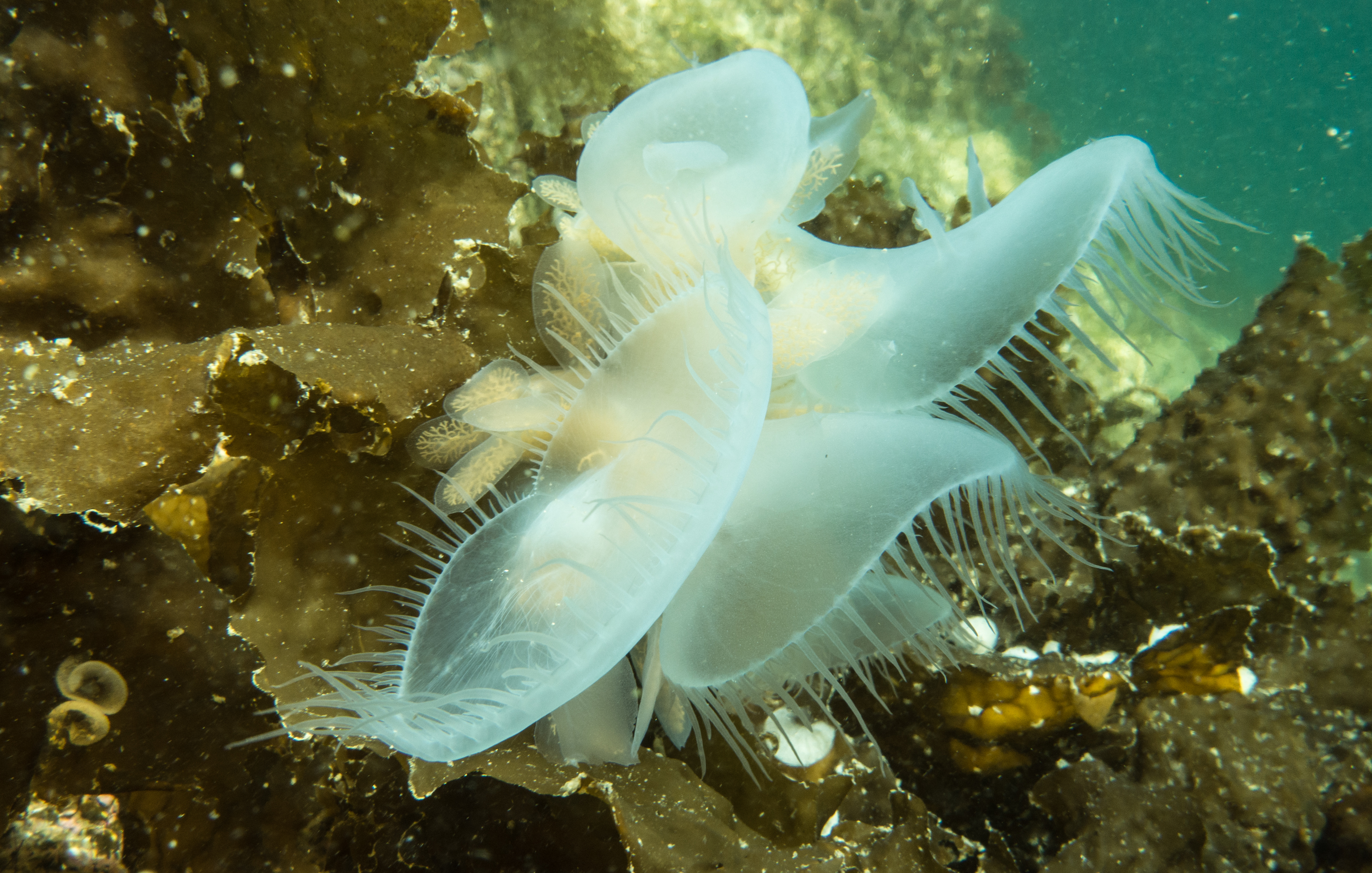 “We have to remember that the ocean has been around for longer than the land. This allows for such adaptive diversity in species. There are nudibranchs inhabiting every named ocean on our planet, but it is in Alaska that they grow large, and sometimes ghostly strange, like this hooded variety.” 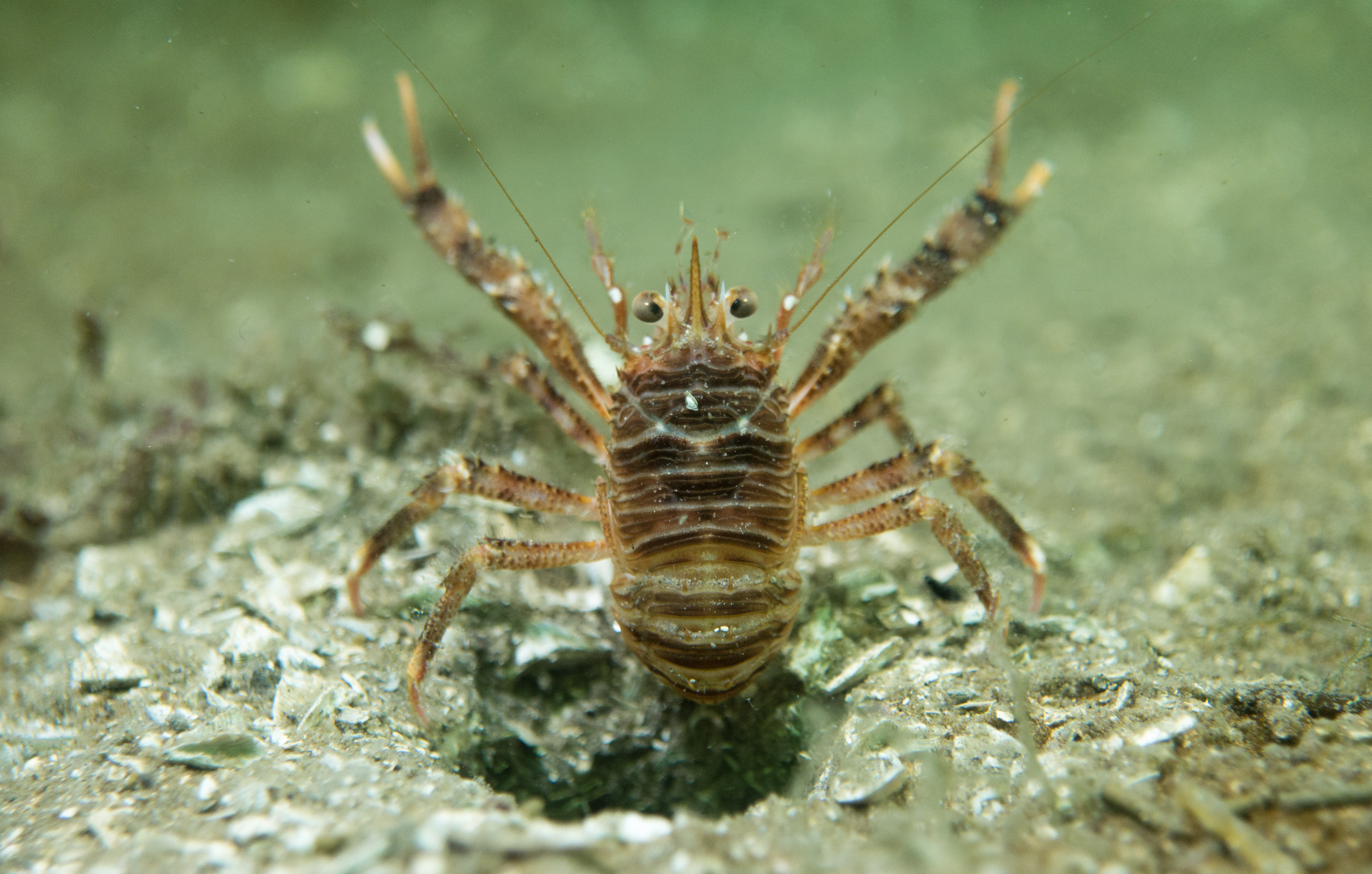 “We use the word biomass to describe the seasonal gatherings of the small creatures of the ocean, but we underestimate the escapade of it. At times, I have felt vertigo underwater while descending toward the seafloor, simply because every piece of it was moving. Only a stone’s throw offshore in the Falkland Islands, there was no seafloor, only a carpet of crabs.” 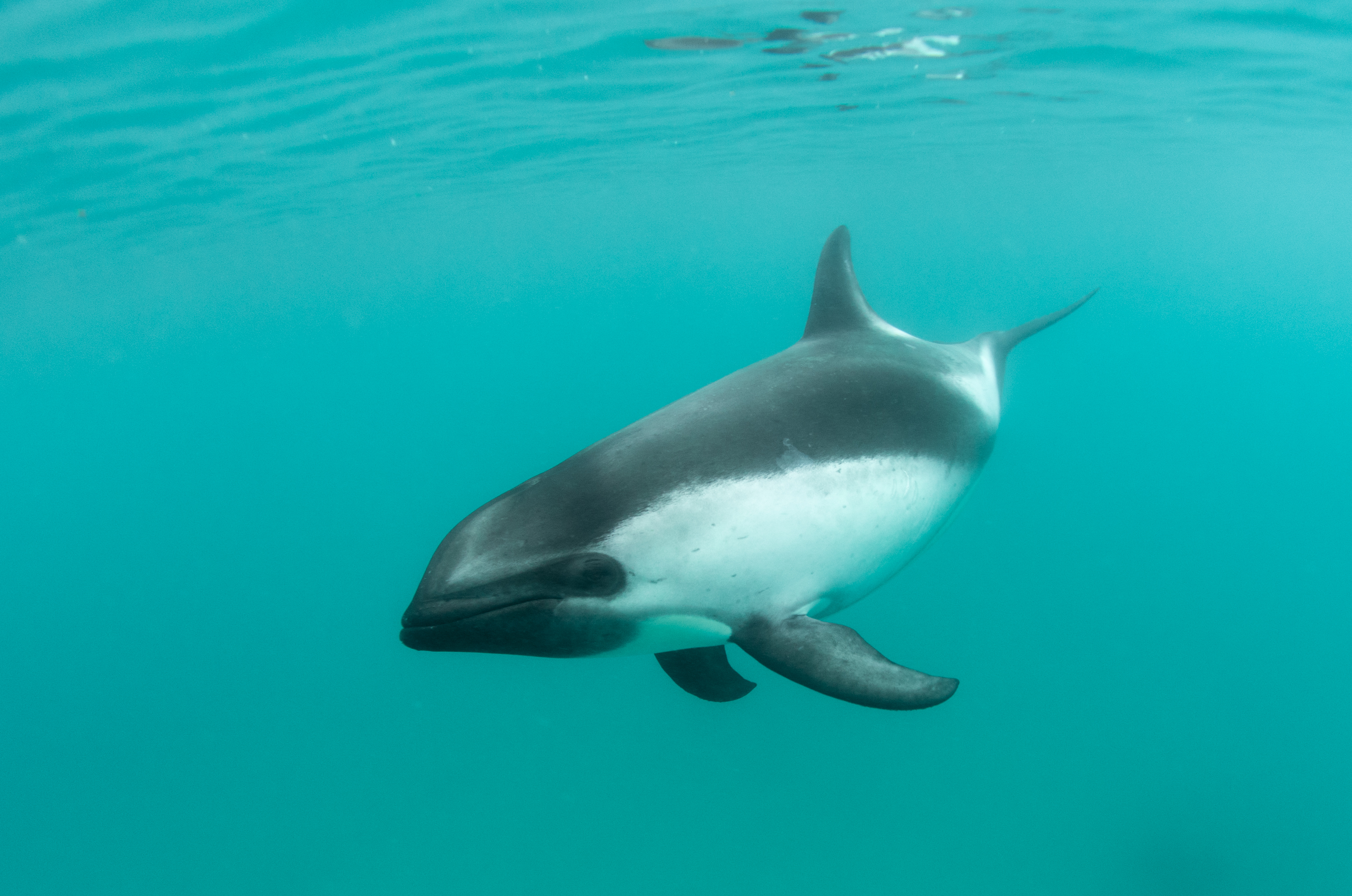 “A frequent friend when traveling in the Falkland Islands, these Peale’s dolphins swirl, leap, and disappear at will. The satisfaction of any marine mammal encounter is proof of our inherent, unspoken reverence for what the ocean means to our health and origins.” 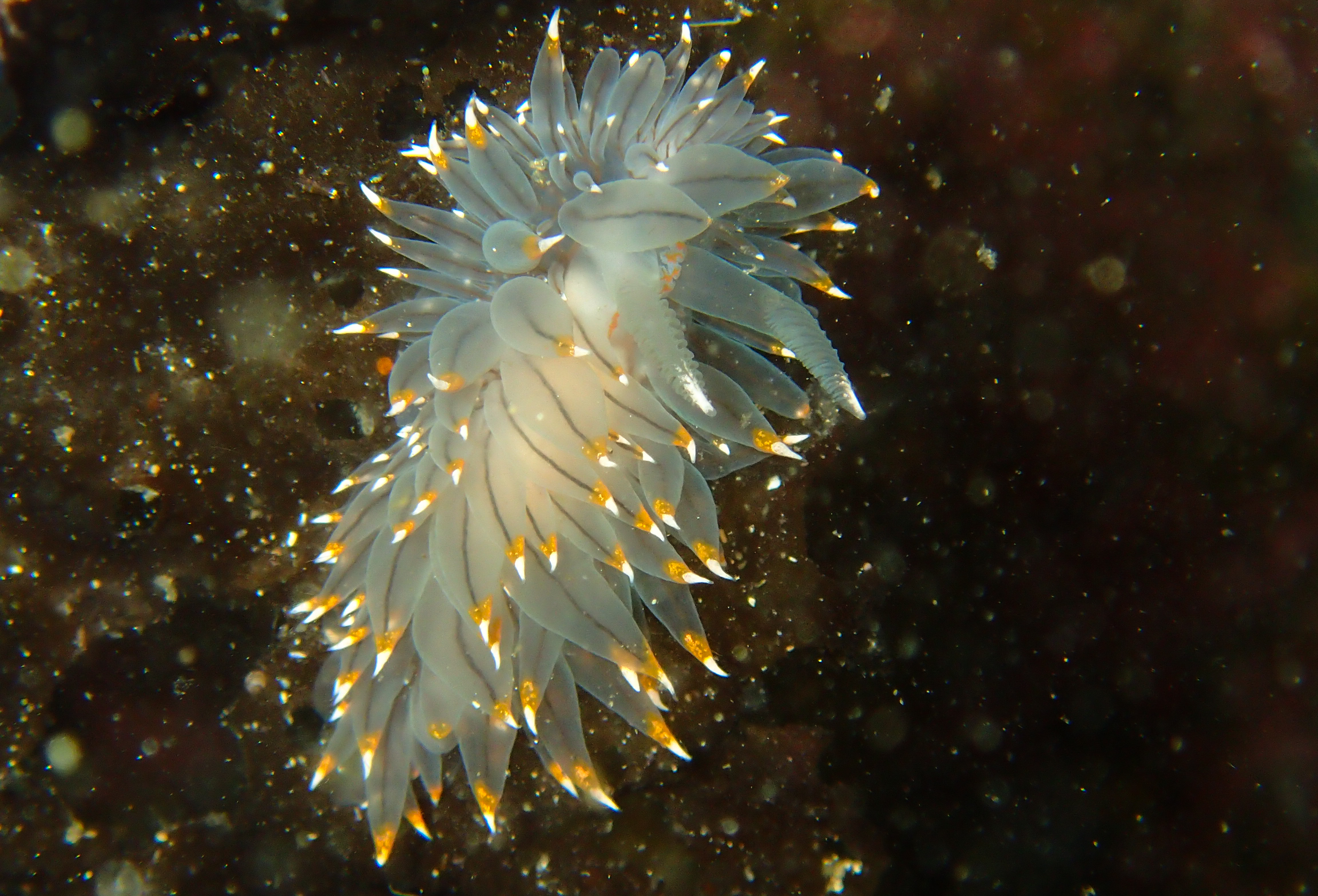 “Color is communication. Even though this nudibranch’s eyes can only tell light from dark–its body has developed to discourage potential predators by brightly announcing itself. There are many strategies for survival in the ocean, but few more visually satisfying.”

Want to travel with Paul? See a list of his upcoming expeditions. To learn more about ocean conservation, subscribe to the podcast, or if you have an ocean encounter you’d like to share on the podcast, visit MeettheOcean.org.