Uncover the storied Mediterranean on a unique sailing vessel

The Mediterranean, literally meaning “the sea in the middle of the Earth,” has deeply influenced Western history and culture. There is no better way to delve into the region’s history and myths than under sail—hopping among the islands and exploring the coasts as the ancients did. Discover its myth and magic aboard Sea Cloud. This historic tall ship is far more than a souvenir of a golden age. It is full of the glamour and sophistication of the ’30s and her original owner, Marjorie Merriweather Post, and also a thoroughly modern yacht in terms of safety technology and creature comforts. It is the perfect platform to travel among islands and along storied coasts, a bridge to history in a land bursting with it.

Mediterranean Gems: From Dubrovnik to Naples

Mediterranean Gems: From Dubrovnik to Naples

New Sailing the Ancient Shores of Sicily and Malta

New Sailing the Ancient Shores of Sicily and Malta

Sun, steady winds, far-reaching Mediterranean culture and history, archaeology, mythology, and the tranquility of small islands—Sea Cloud’s season in the iconic Aegean, Ionian, Tyrrhenian, and Adriatic Seas is historically rich and scenically beautiful. Our itineraries are studded with archaeological landmarks, with sites both legendary and seldom seen. But our expedition style is also designed to balance active exploration with reflection and relaxation—so plan to discover isolated beaches, small fishing villages, welcoming people, and quiet beauty. And to have unplanned moments—a gathering in a Greek taverna perhaps—you’ll remember forever.

Our Ship in the Mediterranean

Polished brass capstans and portholes gleam, teak decks glow, and interiors are fitted with Italian marble and paneled in carved oak. Enjoy the grace and refinement of Sea Cloud, an extraordinarily elegant ship and a direct descendant of the opulent '30s—as you also enjoy the casual attitude and informal style of our small ship cruise of the Mediterranean.

Opened a new world for me.

See, do, and learn more by going with engaging experts who have been exploring this region for decades. Go with an expedition leader, naturalists, historians, and more.

Veteran expedition leaders are the orchestrators of your experience. Many have advanced degrees and have conducted research or taught for years. They have achieved expedition leader status because they possess the skills, the experience, and the depth of knowledge necessary to continually craft the best expedition possible for our guests.

Our naturalists, passionate about the geographies they explore (and return to regularly), illuminate each facet through their enthusiasm and knowledge. Our guests consistently cite the expertise and engaging company of our staff as key reasons to repeatedly travel with us.

Our historians will share the stories, tumults, and triumphs of the people and places we explore. Their colorful personalities and passion for history, from the minutiae to the big picture, make them engaging travel companions.

Every expedition aboard Sea Cloud offers an exclusive service—a Lindblad Expeditions-National Geographic certified photo instructor. This naturalist is specially trained to offer assistance with camera settings, and the basics of composition and to help you become a better, more confident photographer.

Sail with cultural commentators aboard who further illuminate local life. They are leaders in their fields, some still engaged in conducting research, who know the region intimately. Learn from them in onboard presentations, and engage with them on a one-to-one basis to learn more about their topic or backgrounds.

This morning, we disembarked early in Katakolon to begin our overland trek to Olympia, the home of the Ancient Olympic Games, dating back to the 8th century BC.   The archaeological site has been investigated for more than 100 years, and new discoveries are still being made. Our visit to the site was filled with the whirring sounds of the summer cicadas. We were lucky to have plenty of shade and a cool breeze as we explored the ancient training grounds, where the best athletes of the Ancient Greek world gathered under a flag of truce to prepare for the competition to honor Zeus.   The entrance to the stadium, an underground arch standing since antiquity, leads from a collection of inscriptions intended to embarrass past cheaters in the games–sort of a hall of ignominy rather than a hall of fame!   The morning finished with a visit through the truly stunning museum that houses the pediment sculptures from Zeus’s temple, the 12 Labors of Heracles that once graced its roofline, and generations of offerings, large and small, to honor the gods and the champions of the games.   Following our return to the ship, we sailed off the dock and headed on our way around the Peloponnesus toward our final port of Piraeus.   Following a Greek buffet, we enjoyed a boisterous end to the evening provided by the talented crew of Sea Cloud . They led the guests and staff in a rousing round of sea shanties!   Photo caption: The site was used for centuries, eventually growing to provide hotels and services for the gathered athletes, trainers, and later, spectators. Photo by Bill Saturno

What a spectacular morning in Ithaca! With Sea Cloud anchored just offshore in the natural harbor of Vathy, we departed in Zodiacs to explore the island home of Odysseus, the Greek hero. Odysseus famously spent ten years cursed by Poseidon, toiling to return home after the Trojan War. All the while, his faithful wife, Penelope, and his dutiful son, Telemachus, fought off the advances of a host of suitors eager for Penelope’s hand and with it the Kingdom of Ithaca.

Today we made our first explorations into Albania, a formerly communist country that was also subject to the Ottomans throughout the early modern period. In the morning, we docked at Durres, Albania’s largest port and main conduit for cargo and shipping containers. Durres, known as Dyrrachium in the Roman Era, was also an important node for shipping across the Adriatic to Southern Italy throughout antiquity. Disembarking, we took buses inland towards the old capital of Kruje, set amidst the country’s rugged limestone mountains.   Kruje was the capital of Albania’s first independent state, and it was also the center of resistance efforts led by Georgi Kastrioti against the Ottoman Empire. Its impressive fortifications, coupled with a prominent location along a ridgeline, helped Kastrioti “Skanderbeg” fight off numerous Ottoman invasions during the mid-15th century. The site is now home to a purpose-built museum to promote the story of an Albanian national hero.   Around the foot of the castle, we walked through a Turkish-style village lane with wooden architecture and rustic limestone cobblestones paving the street. A variety of traditional art pieces and handicrafts were on display.   For lunch, we enjoyed a traditional Albanian meal at Bardhi restaurant, which serves fresh produce from farm to table. We started with a range of spinach pies, cheeses, and roasted vegetables before the main course of slow-roasted lamb and potatoes. All washed down with a selection of regional wines. Before we departed, we were treated to a performance of traditional Albanian folkdance. In colorful attire and accompanied by joyful music, the dancers and musicians put on a show that had us clapping and singing along.

This morning, we woke up in Albania! We explored new scenery, foods, and culture as we immersed ourselves in the cobblestone streets of Krujë. Intricately patterned, handmade items like rugs, slippers, and pashminas lined the storefronts on the street. We walked up and into the Skanderbeg Castle and the museum, where we learned about Albania’s hero, George Kastrioti a.k.a. Skanderbeg. After a fascinating journey through the history of Krujë, we scurried to lunch during the beginning of what would be a very wet rest of our afternoon. Determined to learn and explore, we quickly adapted with umbrellas and “leapfrogged” under awnings. Lunch at the Bardhi Restaurant was delightful. We enjoyed traditional foods paired with traditional Albanian music and dancing. The bus ride home to Sea Cloud was quiet with bellies full, but a few troopers amongst us took to exploring some of Durrës to close out a successful first day in Albania.

Many things can delight the senses and become part of our memories, knowledge, and overall adventure. But nothing can be more enduring and charming about a destination than the warmth of its people. And that’s how I remembered Montenegro, as a country of courteous, easygoing, and happy inhabitants. This is how we were welcomed at the pier of Kotor today, by smiling guides with whom I developed an immediate connection, as if I had known them my whole life. I felt at home, as if Montenegro, a country in the Adriatic, was instead in Latin America.   Maybe they are joyful because they live surrounded by so much beauty. They have the sea, and they have limestone mountains that rise sharply from sea level, giving the illusion of a fjord, when instead the bay was carved by rivers instead of ice.   After landing at Kotor, we took buses to the tiny baroque town of Perast. Then we went by a small boat to the rocky island of Gospa od Skrpjela, the Church of Our Lady of the Rocks. Long ago, two fishermen discovered an idol of the Virgin Mary in the shallows and determined it was a sign that a church had to be built on that very spot. At that time, however, the only exposed ground was a very small outcropping, barely above the tideline. Over several centuries, local seafarers and fisherman dropped off large rocks. Eventually, an island of significant size was formed, and a church was built with an altar made of marble of different colors, shipped all the way from Venice. We enjoyed the beautiful paintings, gifts, and the views: in all directions, the mountains, and in all directions, the sea. We returned to visit Kotor itself, to go through the gate and explore its narrow streets, many churches, and eclectic shops.   In the afternoon, we placed our trust in the steady hands of the expert drivers as we embarked on a sightseeing tour up and over the serpentine road to 3000 feet high. The sheer fjord walls have a narrow road with twenty-five thrilling switchbacks that our drivers maneuvered with steady skill. The view was worth the ride, together with a tasty treat of smoked prosciutto in the small village of Njegusi along with a splash of wine. We then descended back down to our waiting ship, where hotel manager Simon organized a feast of fresh oysters from Kotor Bay on the spanker deck. Dinner was on the Lido deck. We enjoyed the views along the seventeen miles of Kotorfjord with its background of evergreen trees until the half-moon was the brightest light in the sky. We continued sailing down the Dalmatian Coast towards Albania. 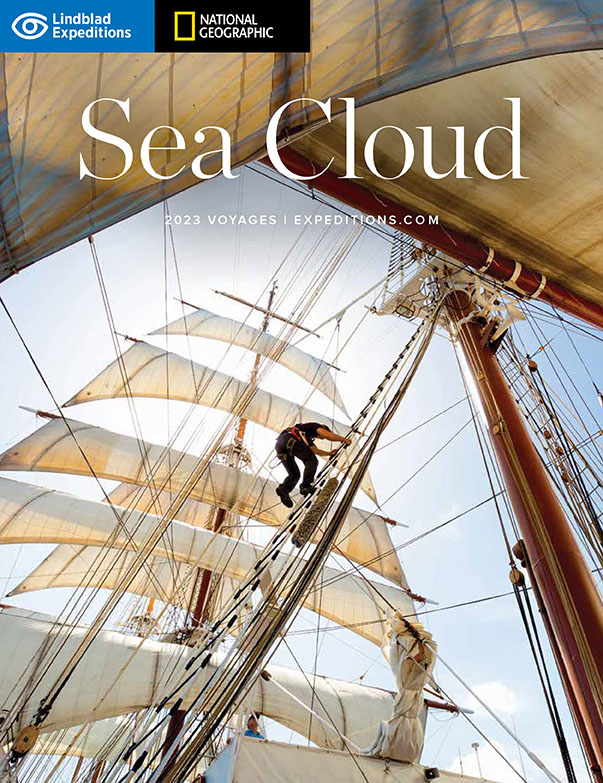